It is somewhat understandable that the Atlanta highway system was built like a wheel with the city at the center and interstates fanning out from the core.  Think about our regional rail lines as they existed before and after the Civil War:  a few rail lines primarily destined for Terminus as it was known before the city’s name became Atlanta.  The folly was to design 20th Century highways on a 19th Century rail model.  Flush everything and everyone directly into the core and you get gridlock.  Know it, feel it, own it.

Well-meaning politicians and planners have spent decades chasing whatever the current view was of the best balance between interstates, arterial highways, side streets and many kinds of mass transit ideas.  Atlanta has the I-285 concrete ribbon that circles everything; I-75 and I-85 carry most north-south traffic directly into and away from downtown; and, I-20 is the only meaningful east-west interstate route. Public transit is a patchwork quilt of few options for most people. In sum, this model no longer works and it has not worked for several decades.

The Georgia Public Policy Foundation, in part, favors a managed lanes concept for the regional interstate highways to carry commuters along with an emphasis on BRT – bus rapid transit that is a smarter public policy option than development of a heavy rail commuter passenger system that would be more expensive to construct and maintain.  Rail has its place in high density cities, but BRT remains a better choice, especially since it can instantly expand accessibility. 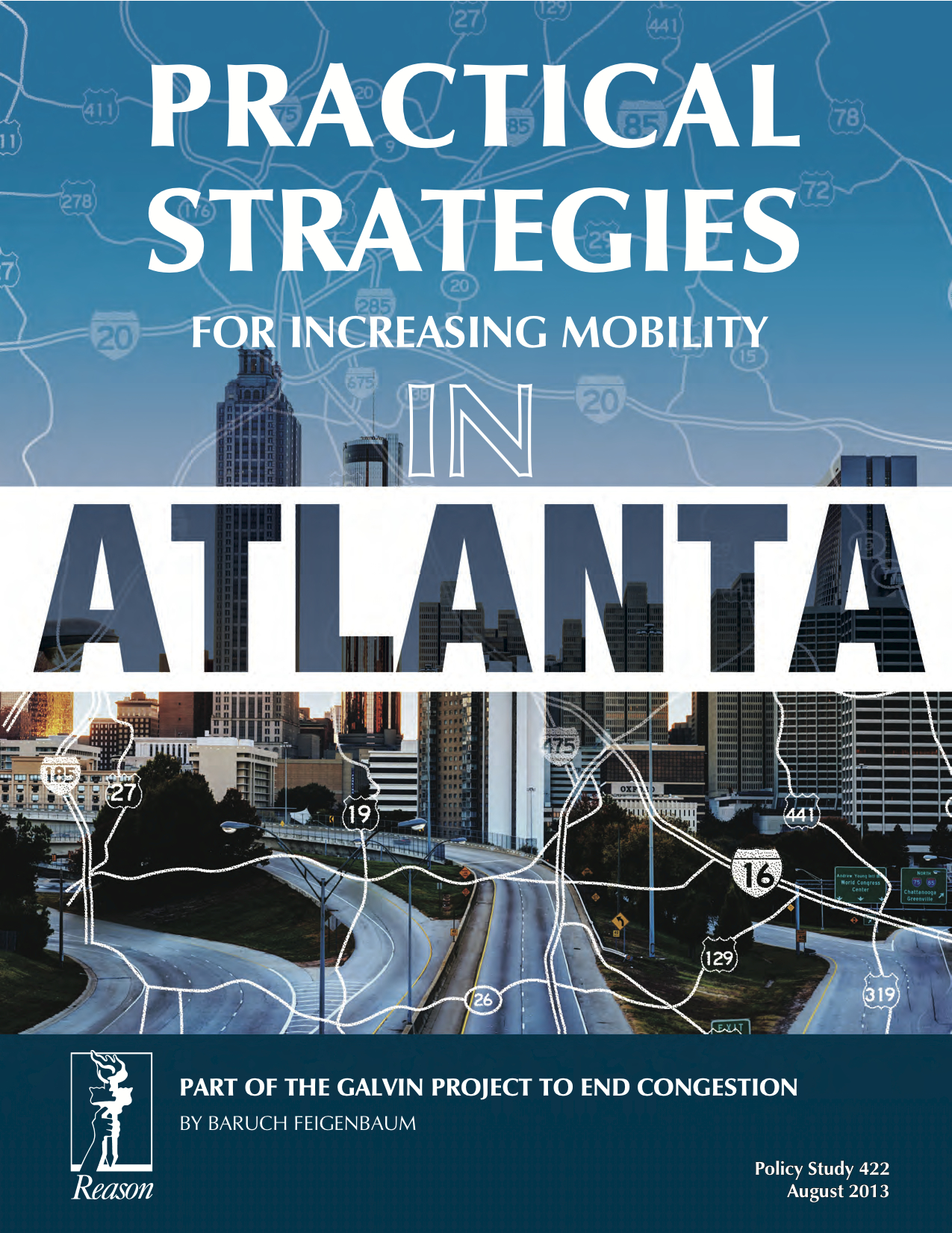 Now the Reason Foundation has added its thoughts to this discussion with a new strategic analysis titled “Practical Strategies for Increasing Mobility in Atlanta.”  The report was written by Reason transportation analyst Baruch Feigenbaum.  Feigenbaum presented the study to a Georgia Public Policy Foundation audience on Wednesday, August 28 in Atlanta.   (Watch on YouTube!)

Feigenbaum wrote, “Atlanta lacks a grid of major arterial highways, which in other Sunbelt metro areas provides the critical backbone of the transportation network. In other words, Atlanta is one of the least core-oriented urban areas in the world with one of the most core oriented transportation systems.”  (YouTube link about bus rapid transit)

Reason Foundation recommendations include dynamic pricing on newly constructed managed lanes; dynamic pricing means the cost to users would fluctuate based on distance traveled and traffic conditions.  Reason also recommends congestion relief through construction of a new east-west bypass in Atlanta’s northern suburbs and a tunnel to connect I-675 to SR 400.

An east-west bypass would revive discussion of the Northern Arc idea that seemed possible in the late 1990’s but died with the end of Gov. Roy Barnes’ administration.  The western edge of the old Arc was positioned at I-75 near Cartersville with the eastern edge at I-85 near Buford.  Reason proposes a more southern path that would start near Acworth, extend past Woodstock and Alpharetta, then south past Duluth and finally end east of Lawrenceville.

The proposed tunnel to connect I-675 to SR 400 would provide another option for thousands of drivers who do not have an Atlanta destination but they have no option other than its surface highways.  Tunnels have been a controversial idea before, but such an idea, well implemented, could alleviate surface traffic within the city and also bring some relief to I-285 congestion.

Another idea put forth by Reason would essentially become a second loop a few miles beyond I-285 that circles the Atlanta central core.  This idea would remodel existing local roads into a stronger arterial highway system to reduce the I-285 flow or at least minimize its growth stress.

Many Atlanta metro region commuters do not have driving options.  Reason proposed development of a comprehensive bus-based transit network to serve the entire region, rather than the current piecemeal system.  This bus asset would reach more people on remodeled arterial roads.  Reason also proposed that mass transit program management should be moved from GDOT — the Department of Transportation — to DCA — the Department of Community Affairs.

Reason and Feigenbaum concluded, “Atlanta’s insufficient transportation system places the metro area at a competitive disadvantage compared with other Southeastern metro areas.  This comprehensive plan is designed to meet transportation goals while remaining politically realistic.”  Reason predicted that funding and building its proposed projects could take 30 years.  “And the sooner policy makers get started on implementing it, the better.”

Baruch Feigenbaum is a Senior Fellow at the Georgia Public Policy Foundation and Transportation Policy Analyst for the Reason Foundation.  Feigenbaum lives in Atlanta.