“Putting working traditional power plants out of business and then saddling ratepayers and taxpayers with the costs of building new, otherwise redundant and overly expensive renewable power plants is a significant but unmeasured broken-windows cost.” – Jon Sanders

“Government is instituted for the common good; for the protection, safety, prosperity, and happiness of the people; and not for profit, honor, or private interest of any one man, family, or class of men.” – John Adams, Thoughts on Government, 1776

“When businesses go down the wrong path – when they hire the wrong leaders, design the wrong product, or create a cost structure that is too high – they go out of business. But when government agencies do the same thing, there are rarely repercussions. The bureaucracies grow larger, leaders hire underlings who happily carry out every ill- conceived decision, and the money continues to flow.” – John E. Sununu

“I could take all this money and run, but that would leave everybody else in the company with the very strong possibility that they wouldn’t have a job.” – Carl Cook, billionaire owner of the Cook Group

Environmental impact: The Heritage Foundation’s Daily Signal points out that adding wind capacity will do nothing to impact global temperatures – a fact the EPA itself admits – but a very efficient wind farm would need 260 times the amount of land to produce the same amount of electricity as a typical nuclear power plant.

Hot air and CO2: While the Obama administration expands its quixotic and misguided climate-change policies against carbon “pollution,” a new study points out that “it is quite plausible – if not certain” that increased carbon dioxide emissions contributing to greening of the planet are reducing global poverty. Source: Cato Institute

Cut regulation, cut costs: The Obama administration recently proposed an $80 billion initiative to expand the Child Care and Development Fund, which provides state grants for child care development assistance programs. Removing costly regulations could provide greater benefits to all families by lowering the cost of care without sacrificing quality, according to a study by the Mercatus Center.

Government Internet black hole: A Politico investigation found that roughly half of the nearly 300 projects the Rural Utilities Service (RUS) approved as part of the 2009 Recovery Act to provide Internet access to rural communities have not yet obligated the full amounts they were awarded. “We are left with a program that spent $3 billion, an investigator at the Government Accountability Office said, “and we really don’t know what became of it.”  Even RUS admits it’s not going to provide better service to the 7 million residents it once touted; instead, the number is in the hundreds of thousands.

Intervention costs: A new federal regulation known as the fiduciary standard “would leave many unable to save for retirement at all,” Georgia Congressman Buddy Carter points out. Source: The Hill 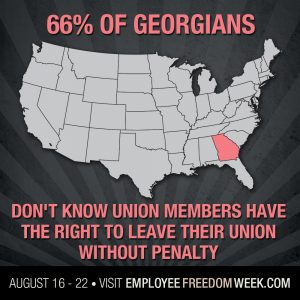 Unions: There are 97 organizations in 42 states celebrating National Employee Freedom Week this week. Why? Did you know that 66 percent of Georgians are unaware that union members have the right to leave their union without penalty?

Top 50: Only 10 of the people on Forbes list of The Richest Person in Every State “are largely do-nothing heirs while the rest have either built their riches from scratch or inherited a company and grown it greatly,” says Forbes.

Best places to live: Kudos to Woodstock, Georgia, ranked No. 50 on Money magazine’s list of 50 Best Places to Live 2015.” No. 1 is Apex, N.C., 18 miles from the economic engine of Research Triangle Park.

Failed policies: Georgia earned an “F” in the Heartland Institute’s 2015 Welfare Reform Report Card, ranking 44th out of 50 states for its welfare reform policies and 13th out of 50 for its anti-poverty programs. Register to hear report card co-author Logan Pike discuss best practices at the Georgia Legislative Policy Forum on October 15.

Good business: Small business owners gave Atlanta a B+ for overall business friendliness, with an A- for ease of starting a business, according to Thumbtack.com’s annual Small Business Friendliness Survey released this week.

Parent power: Georgia ranks No. 5 on the Parent Power Index released by the Center for Education Reform, scoring a B on school choice, online learning and teacher quality and a C for charter schools.

School choice matters: Mayor Mitch Landrieu outlines 10 years of New Orleans’ education reforms in New Schools for New Orleans. “Before Katrina, the achievement gap between New Orleans and the rest of the state was over 25 percentage points. Now, we’ve nearly closed that wide gap with the state.” Graduation rates improved from 50 percent to 73 percent.

Education poll choice: Education Next published the results of its ninth annual education poll, and they are guaranteed not to please all the people all the time!

Top schools: A charter school – Savannah Arts Academy – was the top Georgia school on Newsweek’s list of America’s Top High Schools. It ranked 272 out of 500; seven Georgia schools made the list.

This month in the archives: In August 2010, the Foundation published, “Cut Capital Gains Tax Rate to Boost Georgia’s Economy.” It noted, “Essentially, each dollar of capital gains allowed to remain in the investor’s hands costs the government only 50 cents in revenue. This is a small price to pay for economic growth, increased investment and job creation.”

Point of personal privilege: Jon Stewart’s final “Daily Show” featured a cameo by Paul Brown, the CEO of Atlanta-based Arby’s, Kelly McCutchen’s longtime friend who is a Georgia native and Georgia Tech graduate. Watch the segment, starting around the one minute mark here.

The Forum: In “Checking Up On Health,” Benita Dodd discusses DPC vs. concierge care, fitness apps and devices and the latest on ObamaCare.

Foundation in the media: Benita Dodd’s commentary on the Clean Power Plan was published by The Bryan County News and The Columbia County News-Times.

Visit www.georgiapolicy.org to read our latest commentary, “What Happened to The ‘Public’ in Public Schools?” by Benita M. Dodd.