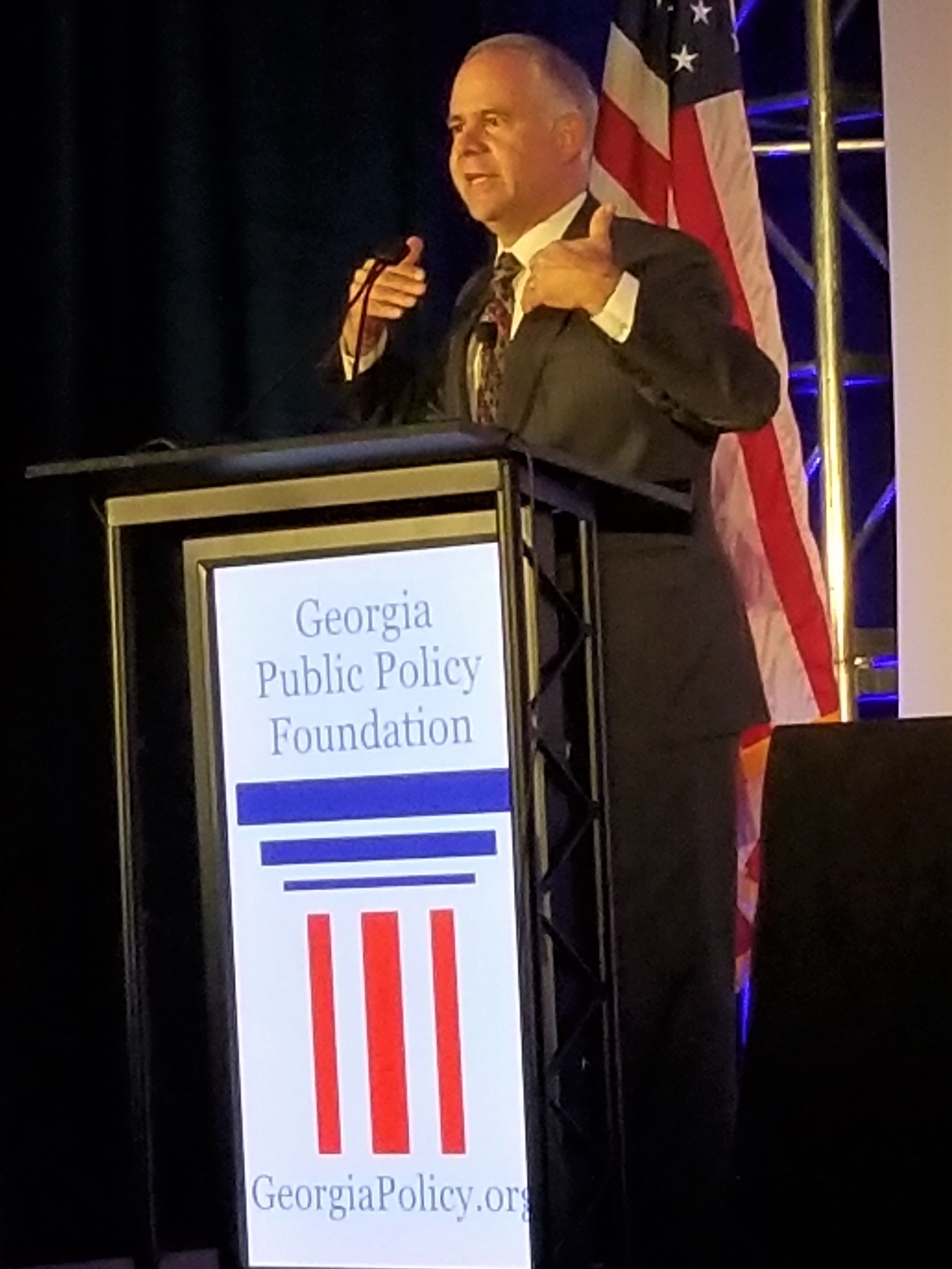 Tim Huelskamp, speaking at the 2017 Georgia Legislative Policy Forum, told attendees, “I spent six years in Washington and it’s still the same today: The real action, the real opportunities for growth and actually reinvigorating a freedom movement in this country actually is here in Georgia, in every state in this Union.”

(Third in a series on the speakers at the 2017 Georgia Legislative Policy Forum held in Atlanta on October 13, 2017)

When the Georgia Public Policy Foundation invited Tim Huelskamp to be the lunch keynote speaker for the 2017 Georgia Legislative Policy Forum in Atlanta, the former Kansas Congressman readily agreed, with one caveat: He had to get back home to Illinois that day in time for his children’s football games.

It took some tweaking of the October 13 Forum schedule, but the father of four was home in time. But his simple expectation speaks volumes about the values of the new president of the Illinois-based Heartland Institute.

Huelskamp, a fifth-generation family farmer in Kansas, farmed with his family for more than 30 years and served 14 years in the Kansas Legislature before going to Washington.

He lives in “Chicagoland” now: “We uprooted our family and moved because, just like you, we care about what’s happening with our country,” he told his Atlanta audience.

Huelskamp exhibits a dogged determination never to lose sight of his roots, even through three terms in Washington as a Congressman: “I never stayed a weekend there because my home and family always remained in Kansas.

“I get asked, ‘What’s Washington like? Is it everything you expected it to be?’

“I say, ‘Oh, yes, and much worse.’ And after six years, that’s still the same thing and it is a swamp, that the president is right.”

Traveling home every weekend may not be possible for every Washington lawmaker, but his commitment to home and family also shines through his approach to policy and politics.

Heartland is known for its bold, science-based work on environmental issues, and Huelskamp praised the Trump administration for withdrawing from the Paris Accord and repealing the so-called Clean Power Plan, which would have required power plants to reduce carbon emissions at enormous cost with no benefit.

With four adopted children, Huelskamp and his wife, Angela, thrive on education choice. He bemoaned the lack of choice in his home state: “I served 14 years in the state Legislature and we never had one single opportunity that ever got choice passed.”

“I see across the nation, particularly with the new [education] secretary, that we have new opportunities to grow, and promote choice in education opportunities. And I know you’re doing that right here in the state of Georgia.” But he added, Georgians deserve an opportunity to put even more into a tuition tax credit and scholarships.

He calls the parent the single most important factor: “If you don’t include the parent, the guardian, mom, dad, grandparent – whoever’s in charge of the child – you can’t actually improve that education system long-term.”

Touching on broadband, he acknowledged that access is critical to education and business, “but the question we have, as free-market believers, is how you make that happen.” He noted the biggest demand was for Netflix, and questioned whether it was the government’s role to fund Netflix access.

Providers in rural areas asked for more money, he said. “I get that. But one thing I would tell them is the technology is going to change. We always need to focus on what’s the proper role of government and how can we make certain we don’t cripple development of technology in the future.”

On health care: “As my teenagers remind me every day, when somebody else is paying the bill there’s very little controlled cost. And so I think that the worst possible way to do it is to centralize that in Washington.”

On federalism: “I spent six years in Washington and it’s still the same today: The real action, the real opportunities for growth and actually reinvigorating a freedom movement in this country actually is here in Georgia, in every state in this Union. Now is the time to get involved, to get engaged.”

In the weeks since the October 13 Forum, national headlines have exploded with accusations of sexual misconduct and inappropriate behavior. As we sit down to Thanksgiving, families can say a prayer of gratitude that there are still many who serve, quietly, effectively and honorably, as positive role models in the leadership of this nation.

© Georgia Public Policy Foundation (November 17, 2017). Permission to reprint in whole or in part is hereby granted, provided the author and her affiliations are cited.