I would like to focus my testimony on the impact of Education Savings Accounts (ESAs) on public schools.

As of last May, 33 empirical studies had been published that examined the effect of school choice on students’ academic outcomes in public schools. Of those, 31 found choice improved public schools. One found no visible effect. One found a negative effect.[1]

Regarding fiscal impact, being fiscally conservative, we certainly appreciate any concern about the cost to taxpayers of any new state programs. Fortunately, any negative fiscal impact can be addressed with minor changes.

We have consulted on these calculations with Kennesaw State University education policy expert Benjamin Scafidi, by many accounts the state’s foremost education funding expert. According to Dr. Scafidi, if a universal ESA proposal had the following features, it would have a positive fiscal impact on the state budget:

– Recipients receive 90% of QBE funding in their ESAs

– Eligible students include all Kindergarten and first-grade students and students in grades 2-12 who spent at least one semester enrolled in a Georgia public school in the prior year.

Here is the reasoning:

1) Students in grades 2-12 who receive an ESA would receive only 90% of QBE funding, instead of 100% if they had instead been enrolled in a public school.

2) Students in grades 2-12 who receive an ESA would NOT receive other state funding such as equalization. There will also be savings in capital outlay costs down the road.

3) At least some ESA students in kindergarten and first grade would have attended a private school, even without an ESA. These students become a fiscal cost to the state through the ESA program. The costs here are nevertheless far less than the savings from (1) and (2) above. Currently, without an ESA, only about 10 percent of Georgia students go to private schools.

(The only exception to these guidelines should be students from military families and foster care children, who should be immediately eligible for ESAs for reasons of the Base Realignment and Closure Commission (BRACC) and support for foster care families. Nevada, which has a universal ESA law, makes out-of-state transfers immediately eligible. This was done because it is a fast growing state, like Georgia, and officials believe this will save capital costs.)

(If public schools claim they face a fiscal hit from ESAs, then they are arguing their costs are primarily fixed costs. If that is the case, then schools should not seek any funding in the mid-term adjustment, since all of their costs are fixed.)

A major study by Dr. Scafidi in 2012 estimated that about one-third (34.5%) of public school costs in Georgia are short-term fixed costs.[2] Another study later found roughly the same thing.

In the table below we show the actual numbers.

Georgia’s FY 2016 total spending per student (latest data available) was $11,031. If you subtract average state QBE earnings of $4,670 per student (according to the fiscal note) and $3,806 per-student for short-term fixed costs, an average of $2,555 per student in revenue remains at the public school the ESA student has left.

This means that on average districts receive a fiscal benefit from losing students via ESAs. The outcome is that there are, in fact, more resources per student available for the remaining students at a school when a student leaves via an ESA. 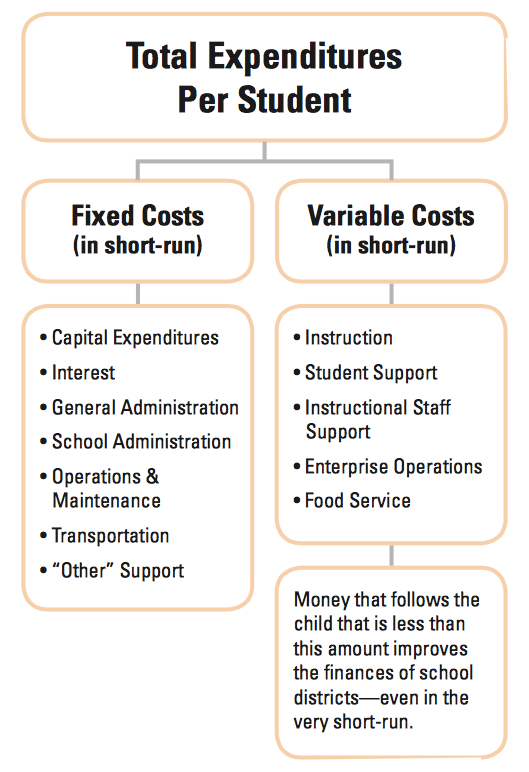 [1] “A Win-Win Solution: The Empirical Evidence on School Choice,” page 19,