By Bartley Danielsen and Laura Elmer

The city of Atlanta has grown a lot this decade. In fact, the city’s population is almost back to levels last seen in the mid-1960s. But new census data estimates provide a warning: While urban populations jumped shortly after the recession, millennials are headed back to the suburbs.

Experts agree this city-to-suburb reversal is related to the millennial generation’s delayed entrance into family building. As millennials enter a new phase of life, they are copying their parents’ migration patterns, and the poor quality of urban schools is one driving force.

Some might mistakenly blame Atlanta administrators for this outmigration, but every large American city faces this problem. Middle-class families who don’t like their assigned school, and who can afford to move to a neighborhood with a better assignment, will do so. Those who can’t afford to move are left behind in increasingly concentrated poverty. Eventually, neighborhoods are divided based on wealth, income and, often, race. In the end, not only are the poor consigned to bad schools, but this spatial sorting produces neighborhood inequality and financial segregation. Those left behind suffer from lack of jobs, family deterioration, an increase in crime and lack of social mobility. 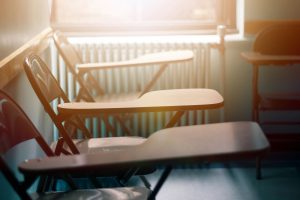 Worse, many of the parents who leave for the suburbs still work in the city. These parents pay a price: rush-hour traffic on the highways. Their longer commutes have negative effects on their health, as well as traffic and the environment.

Fortunately, once we realize school assignments concentrate poverty, we can consider the social benefits of bypassing assignments. The National Endowment for the Arts funded research examining an arts-focused charter school in Santa Ana, Calif. The school received public funding as an infrastructure project in a blighted neighborhood. Middle-class parents who enrolled a child there often relocated closer, and the renewed economic activity revitalized the neighborhood. Before the school’s arrival, gang-related killings topped 40 per year. After the school arrived, murders and overall crime dropped so dramatically that in 2011 Forbes rated the city as the fourth-safest in the country.

Low-income communities suffer when middle-income families leave them behind. The solution to this problem is to make educational options in these areas so good that the middle class has a reason to stay put when their children hit school age. We need to design geographically targeted educational choice programs for working-class neighborhoods. Such programs would allow families to use public funding for a variety of options, from traditional and charter public schools to private schools or homeschooling.

With this solution, young families can continue to choose proximity to work and help neighborhoods thrive. Of course, middle-class families can’t help low-income neighborhoods if they can’t, or won’t, stay. Let’s help them choose to stay.

Bartley Danielsen is associate professor of finance and real estate at North Carolina State University. Laura Elmer is director of special projects for Environmentalists for Effective Education. The Georgia Public Policy Foundation is an independent, nonprofit think tank that proposes market-oriented approaches to public policy to improve the lives of Georgians. Nothing written here is to be construed as necessarily reflecting the views of the Georgia Public Policy Foundation or as an attempt to aid or hinder the passage of any bill before the U.S. Congress or the Georgia Legislature.

© Georgia Public Policy Foundation (October 18, 2019). Permission to reprint in whole or in part is hereby granted, provided the authors and their affiliations are cited.