Senate Democrats intent on defeating a charter schools constitutional amendment vilified the legislation Monday afternoon.  Then four of their own including the Senate’s two longest serving members crossed the charter schools political divide to assure that Georgia voters will decide whether the state shall be allowed to approve charter schools when they vote in November.

George Hooks of Americus and Steve Thompson of Marietta have been in the Senate since 1991. They came to Atlanta as House freshmen ten years earlier. Together they have walked those State Capitol corridors and heard thousands of speeches for some 60 combined years.

Monday afternoon Hooks and Thompson helped provide the difference in a charter schools bill vote that one day might be considered historic.  With 38 votes needed for two-thirds passage, Hooks and Thompson voted with the Republican majority.  They provided forceful political cover on a contentious issue.  The final vote was 40-to-16 with four Democrats in support. 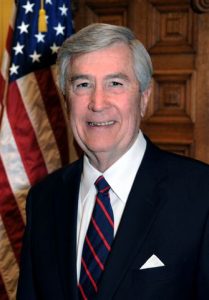 For Hooks, it was a personal decision.  The Sumter County schools that he attended as a youth and where his daughter now teaches first grade are in chaos and might lose their accreditation. Proclaiming that “My local people come first,” Hooks launched into a powerful oratory:

“I’m going to tell you one of the most heart-breaking things I have ever been through in my life was meeting with 128 mamas to talk about their children, black and white, rich and poor, young and old.  They are on the verge of catastrophe.  They have no faith, no confidence in our local school board,” Hooks told the quiet Senate.  “Maybe they are wrong but that’s the fact.

“If somebody has the power to take over that dysfunctional school board I will not stand in their way,” Hooks vowed.  “What they want is a state-chartered school system.  I am not going to face a tear-stained mama fighting to protect her child again.”  Shortly thereafter he concluded, “God bless each of you.  Vote your personal conscience.”

Thompson listened as three other Democrats spoke against the bill.  Sen. Vincent Fort called the legislation a “blatant corruption of power” that “trotted out” school children as “pawns to pad the pockets of for-profit management companies and real estate deals” supported by a “Herculean” lobbying effort that, Fort told the Senate, was “drenched in money mongering.” 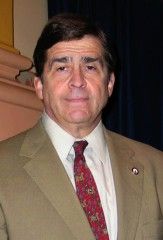 Then Thompson – who once served as the Democratic majority floor leader – rose in defense of the bill.  “I went through one session when the public thought they didn’t get a chance to vote.  I don’t want to do that again because in the final analysis what some of you folks are forgetting is (Georgians) get to vote on this and debate it all summer and if they don’t like it they can make it go away,” Thompson said.

“The other argument I hear that doesn’t make any sense (is) you don’t need to do this, you don’t have to do it.  Well, if you didn’t do it this way the public wouldn’t get to have their voices heard and vote on it.  Think of that.  I’m always going to be for public education.”

Thompson said he was assured by Governor Nathan Deal “that he is going to make it a priority that rural schools are not hurt and that some of these innovations will take effect in rural areas … I am not going to be accused of tying the hands of this administration when it wants to try innovation, or this General Assembly.  That’s where I’m at.  I’m going to embrace it because if you get afraid to change you become dust sitting in a car somewhere in a town where tumbleweed is rolling by you.”

All 36 Republicans voted yes. Hooks and Thompson were joined by Democrats Hardie Davis and Curt Thompson.  Democrats who worked against passage also offered two amendments that were both defeated.  One amendment would have rewritten the ballot question.  The other tried to ban for-profit education companies from doing business in Georgia.

Georgia Charter Schools Association CEO Tony Roberts singled out Governor Deal for his support since the unexpected Supreme Court opinion last May that declared the Georgia Charter Schools Commission unconstitutional.  The Governor approved several million dollars this year and next fall to make sure former charter commission schools will remain open.  He also named the constitutional amendment as one of his highest legislative priorities.

Asked about November, Roberts said, “The next strategy is how to keep the message ringing clear and true about what this will do.  There is going to be a lot of competing noise (around) the Presidential election.”  The ballot referendum needs a simple majority for November passage, a lower bar than the hurdle it just passed in the House and Senate.