In Teacher in America, Jacques Barzun writes that, “In theory, the printed book should have technologically annihilated the teacher, for the original ‘lecture’ was a reading from a costly manuscript to students who could not afford it.” Clearly, that has not been the case. Barzun was talking about new educational technologies (decades ago), and while teachers are not likely to be “annihilated” by new technology in the near future, schooling will likely look very different, and very soon.

In his 2011 book Getting Smart, venture capitalist and a former school superintendent Tom Vander Ark makes a case for changing our views of schooling to keep pace with new technologies. He argues for a blend of online and classroom learning, and provides vignettes of schools, companies, and other organizations that are currently working on this transition. 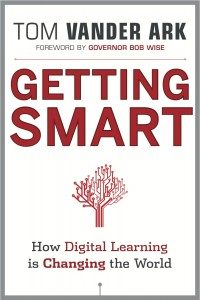 Throughout the book, Vander Ark makes predictions about what various aspects of U.S. education will look like in five and ten years. For example:

He believes that in five years:

• “The Common Core State Standards and Race to the Top assessments will frame this decade of U.S. education the way NLCB did in the 2000s.”

• “All U.S. students will have access to online courses for AP, high-level STEM courses, and any foreign language.”

• “Half of states and districts will stop buying print textbooks and will shift to customizable digital texts and open education resources.”

•“Several states will use performance contracting, charter schools being an example today, to authorize and manage the relationship with all schools and education providers.”

•“Fifty of the largest one hundred districts will, on a regular basis, close struggling schools and replace them with blended charter or contract schools, expand access to online courses, and embrace school networks.”

•“Budget woes will cause hundreds of districts and most charter networks to move to blended models, shifting to online instruction for a portion of the day to boost learning and operating productivity.”

•“Those learning at home through homeschooling and virtual charter schools will double to six million students, or about 10 percent of all students.”

Some of these are stronger bets than others. Many, such as states choosing to use performance contracts, the ability to drop textbooks for electronic resources, or closing struggling schools, are possible now. No group of states or districts wants to be the first to make such big changes, but it is very conceivable that at least some of these could all come to pass within five years.

He may be on less firm ground regarding his hopes for the Common Core Standards and Race to the Top – if anything, a proliferation in online choice at the course level, which Vander Ark advocates, could very arguably lead to pressure for less common standards, not more. And while the Race to the Top assessments may prove to be a step forward, the program itself is getting bogged down as states and systems are working with a willing U.S. DOE to water down the promises they made in their applications. And, unfortunately, he uses federal support for green energy as an example of the right way to do public-private investment partnerships (though thankfully he doesn’t mention Solyndra).

Those are relatively minor missteps. The book on the whole is on target, and is in practice useful for several audiences. Vander Ark has sections on what practical steps aspiring educators, nonprofit leaders, state policymakers, and philanthropic investors can do to enhance online learning. He is spot on when he talks about technology as an “equalizer.” In a huge country like the U.S., technology is probably the only way to scale up our need for excellent teachers to the level required.

And his predictions get better as he looks farther out in time. He thinks that in ten years:

•“Most U.S. students will attend a blended school where students report to a physical space and most learning happens online.”

•“With a decade of data, second-generation recommendation engines will drive tutoring applications that are more effective than one-on-one sessions with a live tutor.”

•“Despite generally flat funding for education, the U.S. K-12 instructional materials and related technologies market will grow by more than 50 percent – an explosion of digital services will offset the decline of print.”

•“More than $10 billion in school facilities will be sold for redevelopment because major remodels of antiquated buildings will become cost prohibitive.”

•“There will be several DIY high school options with an engaging merit badge sequence that will allow students to take ownership of and direct their own learning – with lots of teacher support, but when, where, and how students need it.”

I think these are all very likely to be the case in ten years. Vander Ark mentions higher student achievement possibilities, but he barely touches on some of the corollaries that would follow – the potential for massively higher pay (and social status) for really excellent teachers; the savings states would realize through efficiency; and, maybe most importantly: all of the other benefits we can’t predict, but which always follow major breakthroughs.

Eric Wearne is a Georgia Public Policy Foundation Senior Fellow and Assistant Professor at the Georgia Gwinnett College School of Education. Previously he served the Georgia Governor’s Office as deputy director at the Office of Student Achievement.