When it comes to getting “more” of something, however, we either (a) have to accept less of something else or (b) increase the productivity of what we’re doing.

Governor Nathan Deal and the Georgia General Assembly have been blessed with extra tax revenues over the past two legislative sessions, thanks to their smart economic stewardship and the ingenuity of everyday Georgians. And, in the spirit of “more,” they chose to devote over a billion dollars of those extra revenues to additional funding for our K-12 public schools.

With the 2016 legislative session approaching, the Governor’s Education Reform Commission has made some fine recommendations in several areas, especially regarding charter school policy.

The most far-reaching Commission recommendation calls for a new state public school funding formula, one better geared to promoting student achievement. It would no longer require local public schools to spend funds on items that do not appear to boost student learning.

In addition, the new formula would provide about $250 million a year more for public schools. That’s on top of the recent billion-dollar increase. 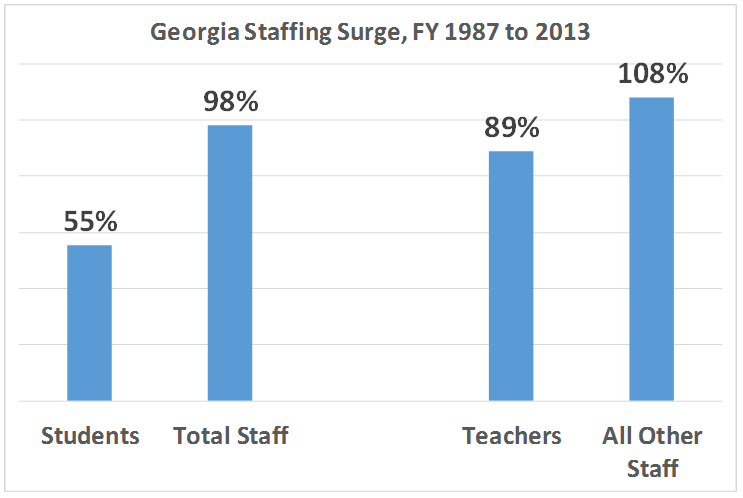 The numbers above do not include fiscal year (FY) 1986, the first year of the Quality Basic Education (QBE) funding formula; 1987 is the earliest year available. Also, the data above do not include the significant funding increases that Governor Deal proposed and the General Assembly accepted for fall 2014 and 2015.

Unfortunately, during the staffing surge in public education in Georgia and around the nation, there is no evidence that student achievement increased.

For example, during the 1992-2013 staffing surge in American public schools, reading scores fell for 17-year-olds on the National Assessment of Education Progress (NAEP) Long Term Trend Assessment, while national math scores were flat. 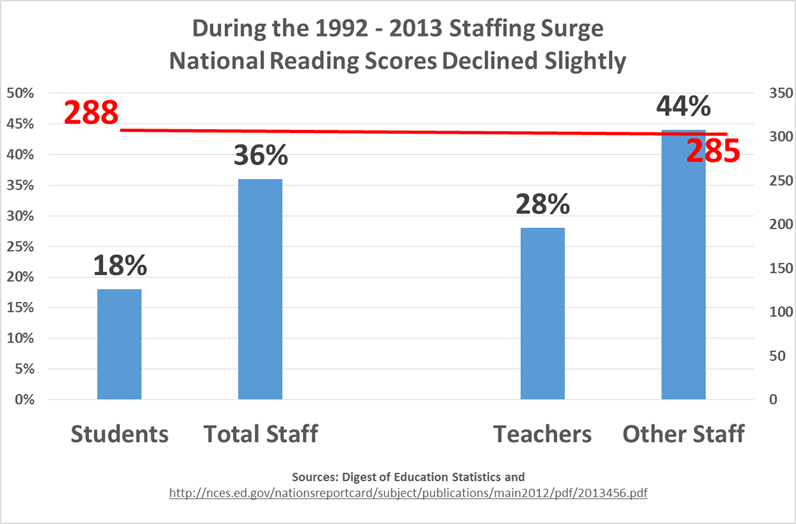 Public schools have received “more” money for decades. Public school leaders and employees have wanted that, and voters were persuaded. The implication was that student outcomes would improve. 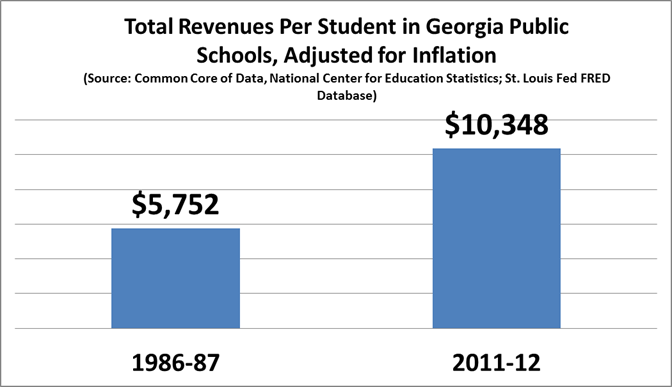 So, how can student achievement improve? In 2016, Georgia has a golden opportunity to help students achieve more.

With the governor and General Assembly apparently primed, yet again, to give public schools more funding, the state should also offer families more educational freedom. Even better, greater educational freedom can be achieved in a manner that saves taxpayers money.

Georgia should offer all public school students the option of an Education Savings Account (ESA). As part of the new funding formula, the state would dedicate 95 percent of funds to debit cards that parents can use to purchase a variety of educational products and services. ESAs allow parents to select the best schools for meeting their children’s unique education needs – while saving the state 5 percent. They also allow parents to secure wrap-around educational services outside traditional school settings.

Examples of educational services that could be accessed with ESAs include:

The state would maintain a list of approved private schools and service providers. The debit card would only work when purchasing approved services; an auditing process would help prevent fraud.

ESAs offer parents “more”—more flexibility, more control and more opportunity to ensure that every education dollar is targeted at their child’s individual needs. Funds not spent in a given year can be “carried over” to be used in later years or saved for post-high school education. The Friedman Foundation for Educational Choice offers a primer on ESAs here: www.edchoice.org/our-resources/fast-facts/.

The alternative to greater parental choice is a movie we have been watching for decades: doing little to promote parental choice and greater productivity for our tremendous investment in K-12 education, and watching helplessly as the bureaucracy surges ahead while student achievement lags behind.

The benefits of ESAs and expanding Georgia’s wildly popular tax credit scholarship program are savings to taxpayers while parents are simultaneously offered access to schools and services they deem better for their children. More than 20 research studies have shown that school choice programs improve outcome for students who remain in public schools. To date, not one study has shown school choice harms students in public or private schools.

Georgia students can get more for less cost to taxpayers, as school choice improves the productivity of dollars spent on education.

The recommendations of the Education Reform Commission are a step in the right direction. Still, Georgia’s children deserve “more.” Not just more taxpayer funding, but more opportunity. To race ahead to a successful future, they deserve education beyond ZIP Codes and dollar signs. They deserve access to the full menu of schools, services and innovations that will allow them to reach their full potential.

Benjamin Scafidi is a senior fellow with the Georgia Public Policy Foundation and a professor of economics at Kennesaw State University.