One of the primary architects of the special council recommendations that became the basis for this year’s juvenile justice reform legislation says the primary reason that thousands of juveniles enter the legal system each year is because they come from dysfunctional families.

“Most of the kids we’re seeing today in most courts are kids in which we have broken families, most of them have single parents, most of those are mothers and there are poor or very weak problem solving skills, not just among the young people but also their parents,” Clayton County Juvenile Court Chief Judge Steven Teske told the Georgia Public Policy Foundation this week.

Last year Governor Nathan Deal added Teske to the reconstituted Special Council on Criminal Justice Reform to capitalize on his expertise. On Thursday, Deal said Teske “is regarded by many people as the true expert on juvenile justice matters” when the Governor was in Dalton to sign HB 242, this year’s massive juvenile justice and civil code rewrite legislation. 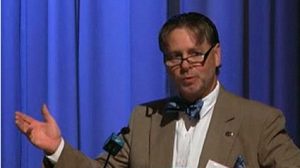 “We are having a lot of low risk kids who have very high needs because of family dysfunction going into these (youth detention centers) with razor wire fences,” Teske said.  “They don’t belong here.  We’re making them worse, resulting in a 65 percent recidivism rate when they get out.”  (Click here to watch the Teske interview on the Foundation YouTube channel.)

Governor Deal’s signature Thursday morning on HB 242 continues a sweeping review that has seen the state literally change its adult and juvenile corrections course in two years.  Georgia has traditionally been a hard-on-crime state that emphasized locking people up, mixing hard-core and soft-core inmate populations and giving little thought to successful community re-entry. (Click here to watch the Governor’s remarks on the Foundation YouTube channel.)

These criminal justice philosophies were consistent with national tough-on-crime standards that became dominant nationally in the 1980s and 1990s as politicians responded to what they viewed as the desire of their communities to put criminals away as quickly as possible for as long as possible.  What that trend did not recognize was that mental illness, substance abuse and other factors meant this one-size-fits-all approach really did not fit at all.

Therefore, it was not surprising when refined data analysis began to show that adults released from prisons and youths released from detention were coming back at alarming rates.  Here in Georgia, the rate was one-in-three adults re-incarcerated within three years and the numbers were even worse for juveniles, one-in-two were re-adjudicated of a juvenile offense or charged with an adult crime within three years.

“If you have one-out-of-three adult offenders return to your prison system within three years you can’t say you are keeping society safe nor (can you say) that you are spending and saving the money of the taxpayers,” Deal said on Thursday in Dalton.  The cost to incarcerate one adult inmate is $18,000 per year and much higher in the juvenile sector, about $90,000 per year. 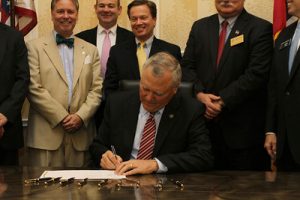 Twenty-eight months after Deal’s inauguration, the state now has in place adult and juvenile justice policies that emphasize incarceration for serious and violent offenders and a range of alternative treatment options for non-violent persons, especially those who have mental illness or substance abuse challenges.  In addition, the state is more focused on veterans’ courts.

Overall, the state predicts adult and juvenile justice reforms will save taxpayers $349 million over five years — $264 million in the adult sector and the remainder in juvenile justice.  Deal also said Thursday that implementing community-based alternative treatment programs will mean the state should not need to build two new juvenile detention centers.

The next fiscal year budget that kicks in on July 1 includes $5 million in state dollars to help communities start voluntary alternative treatment programs for juveniles.  “If we can save money on one end it will allow us to use the money on the front end,” Deal said.  He targeted substance abuse and family counseling programs as priorities.  “We believe by doing that we can save them early in the process and not have them move into the arena as an adult offender.”

Another feature of this year’s Georgia reforms include a relaxation of adult minimum mandatory sentencing in limited circumstances where judges are given sentencing discretion in some very specific cases, or where judge, prosecutors and defense counsel are in agreement.  Deal said it makes sense for the state to avoid imposing “undue and long punishments for folks where the facts certainly don’t justify the mandatory minimum.”

The criminal justice system review that has been underway through the Deal administration will continue long after his tenure as Governor concludes.  HB 349 signed last week by Deal creates a new criminal justice council that will remain in place until June 2023.   The names of its 15 new members have not been announced by the Governor’s Office.

Clayton County’s Judge Teske also told the Public Policy Foundation he thinks the state should examine the data concerning the number of juveniles who are originally charged in adult courts, but whose cases are transferred to juvenile courts for eventual disposition.  “We could save more money and get help to these kids sooner in juvenile court,” Teske said.  “I would like to see us start asking these questions as far as continued reforms.”