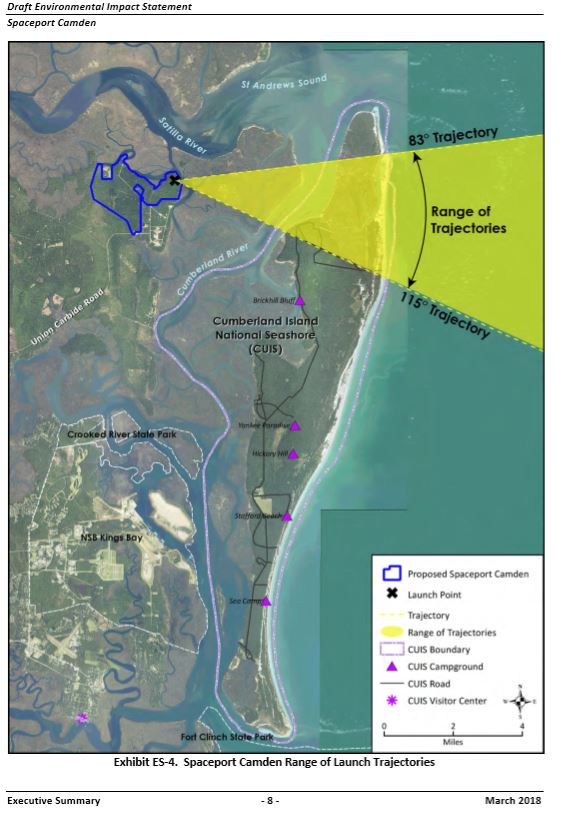 The trajectory range for launches from the Camden County proposed spaceport, as published in the draft environmental impact statement 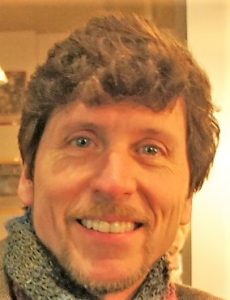 My friend works hard at a low-paying job. Every week he buys a lottery ticket, even though he knows the odds of winning are miniscule. For him, it’s inexpensive entertainment. But if he spent half his paycheck on lottery tickets, we’d all agree he was crazy for wasting his money chasing an impossible dream.

Camden County, Ga., doesn’t understand this logic. The county administrator and commissioners have spent almost $5 million taxpayer dollars pursuing a fantasy with almost zero chance of success. They dream of building a commercial spaceport for small start-up companies to launch rockets over Cumberland Island National Seashore. They make extravagant claims about creating jobs and attracting businesses, and bemoan the children forced to pursue their aerospace engineering dreams elsewhere: If the spaceport dream could be realized, Camden’s economic worries would evaporate!

But the spaceport dream is actually an economic nightmare. Not one commercial spaceport has ever made money, employed more than a handful of people or attracted industry. MidAtlantic Regional Spaceport in Virginia, Pacific Spaceport Complex in Alaska, and Spaceport America in New Mexico are all financial failures, averaging less than one launch per year and surviving through millions of dollars of annual taxpayer subsidies. Not a single rocket was launched from the Virginia and Alaska spaceports over the past four years while millions of dollars went to repair launchpads destroyed by catastrophic explosions.

Camden’s commissioners have neither prepared a business plan nor signed an agreement with a proven space company. Many taxpayers are questioning this. The commissioners ignore taxpayers’ concerns and continue sending tens of thousands of dollars out of the county each month to pay for lobbyists, lawyers, PR firms and consultants, while the county administrator jets around the country to rub elbows with other spaceport dreamers.

Besides PR hype, what do county taxpayers get for the $5 million spent so far? Mostly, an option to buy a highly contaminated former industrial site. Cleanup costs are estimated at more than $500 million, so high that rather than remediating the site, the property owner entered into a covenant with the Georgia Environmental Protection Division to guarantee the site will never be disturbed. If the commissioners exercise this option, county taxpayers will own this grotesque albatross.

As every available county tax dollar is sucked into the spaceport black hole, department budgets have been slashed, money stripped from the Camden Partnership (a group that lobbies on behalf of the Navy and Coast Guard), and funds aren’t available to pay for a library roof, maintenance of firefighting equipment or school safety improvements.

Even if it attracts some customers to launch rockets, Camden is shooting itself in the foot. A single rocket explosion could destroy the county’s existing economic base. The county is blessed to have Naval Submarine Base Kings Bay, home of the nation’s nuclear-armed fleet; Cumberland Island National Seashore, a globally important historic, ecological and tourism resource, and productive commercial and recreational fisheries.

What happens if a rocket corkscrews off course, blows up, and rains fiery debris down on National Seashore campgrounds and submarines being serviced? It’s not a far-fetched scenario: The county’s consultant estimates a launch failure will occur every 16 months, on average.

Even routine launches will cost the county. The Federal Aviation Administration’s safety regulations mandate evacuation of land, sea and air in a flight corridor miles wide and extending hundreds of miles out to sea. During launch window closures, which can be prolonged for days if a launch is repeatedly scrubbed and rescheduled, Cumberland Island National Seashore can expect evacuations, commercial and charter fishing boats will have to stay at the dock, traffic on the Intracoastal Waterway will be blocked, and transit to and from the Port of Brunswick will be stalled.

Unfortunately, the FAA does not consider the certainty of economic failure when reviewing an application for a spaceport license. An FAA staffer said, “It’s not our job to save local governments from themselves.”

He’s right. It’s the job of every Camden County taxpayer, voter and business leader to demand that county commissioners wake up from their spaceport stupor and end the nightmare.

Jim Renner, a geologist and Camden County taxpayer, wrote this commentary for the Georgia Public Policy Foundation. The Foundation is an independent, nonprofit think tank that proposes market-oriented approaches to public policy to improve the lives of Georgians. Nothing written here is to be construed as necessarily reflecting the views of the Georgia Public Policy Foundation or as an attempt to aid or hinder the passage of any bill before the U.S. Congress or the Georgia Legislature.

© Georgia Public Policy Foundation (August 31, 2018). Permission to reprint in whole or in part is hereby granted, provided the author and her affiliations are cited.