Memory Lane: Reforming Georgia’s certificate-of-need (CON) laws, which protect medical monopolies, has been a priority since the early days of the Georgia Public Policy Foundation, as shown in this editorial on healthcare reform in the Daily News from February 1992. The Foundation celebrates its 30th anniversary this year; its campaign against CON continues: See Chris Denson’s commentary. 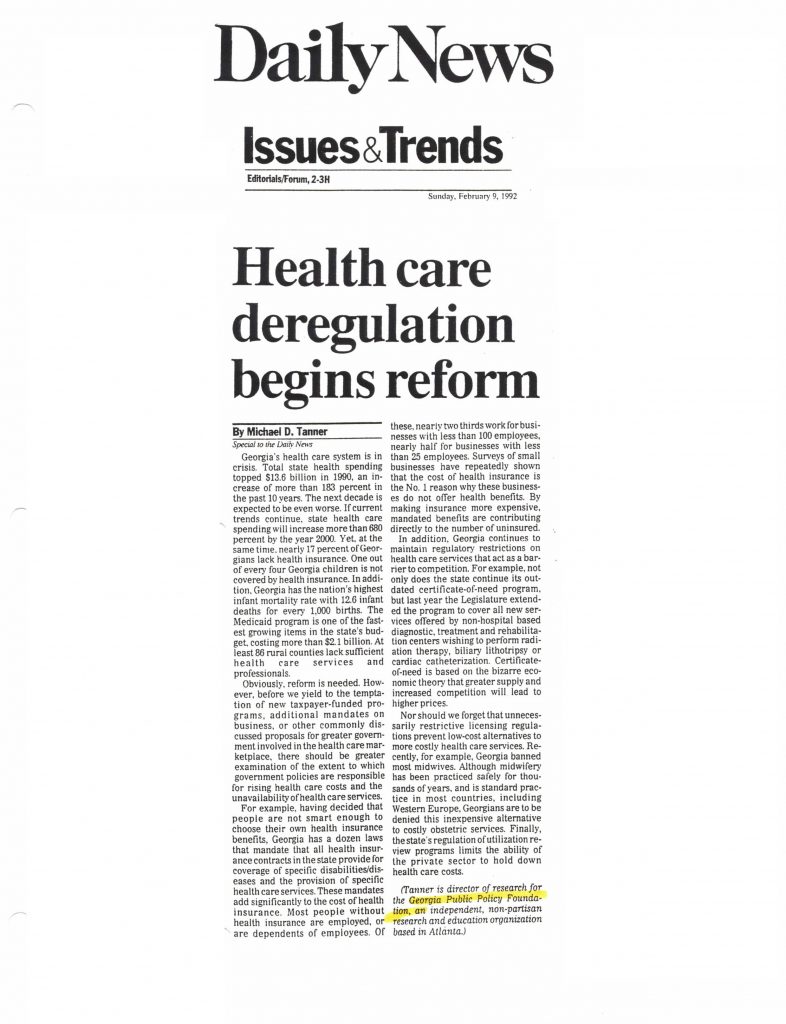 Accolades: For the fourth year in a row, the Foundation has been ranked one of the “Best Independent Think Tanks” in the 2020 Global Go To Think Tank Index Report, published by the Think Tanks and Civil Society Program at the University of Pennsylvania. The Foundation is one of just three state-focused, free-market think tanks to earn the accolade this year; the other two are the Texas Public Policy Foundation and the Pacific Research Institute, in California.

“If the pandemic vanished tomorrow and all U.S. schools instantly reopened in exactly the same fashion as they were operating last February, how many parents would be satisfied to return their daughters and sons to the same old familiar classrooms, teachers, schedules and curricula? A lot fewer than the same old schools and those who run and teach in them are expecting back!” – Chester Finn

“Too many individuals, particularly those inside the Beltway, are constrained in what they say about our debt either because they caused it through their mismanagement, aided and abetted its pernicious growth, or worry about their own employment.” – Michael Doorley

Homeschooling: As parents grow increasingly frustrated with remote learning during the pandemic, more are trying to teach children themselves, The Wall Street Journal reports. North Carolina’s home-school monitoring website crashed on the first day of enrollment, and more than 18,800 families filed to operate a home-school from July 1 to Jan. 22 – more than double the previous year. Connecticut saw a fivefold increase  in the number of students who left public schools to be home-schooled. In Nebraska, the number of home-schooled students jumped 56%. Georgia has yet to release current numbers, as the Georgia Public Policy Foundation’s Investigative Journalism Initiative reveals.

Cities: Most U.S. cities “were ill-prepared for any crisis, much less one as serious as what we are currently facing” after state shutdowns in response to COVID-19, according to the fifth annual Financial State of the Cities report by Truth in Accounting. The survey of the 2019 fiscal health of the 75 most populated cities before the pandemic found that 62 did not have enough money to pay all of their bills. Atlanta ranked 26th out of 75, with a per-taxpayer burden of $1,900, earning it a “C” grade.

Biden targets: Tax professionals predict the Biden administration’s targets could include estate taxes, the top tax rate, capital gains and dividend tax rates, personal exemptions and Opportunity Zones, according to Accounting Today. Americans lack real economic understanding of taxes and taxation, said investment advisor Armstrong Morris. “For example, corporations do not pay tax. Only people can pay a tax,” he said. “Corporations may write the [tax] check but people pay them: Customers pay them through higher prices, employees pay them through lower wages and investors pay them through lower returns.”

Goodbye, cost-benefit analysis: A Biden executive order “that was almost entirely overlooked but could easily end up having the biggest impact is titled “Modernizing Regulatory Review,” according to an editorial in Issues and Insights. “It’s about unleashing the regulatory state with a ferocity never before seen in this country. … Clyde Wayne Crews, a regulation expert at the Competitive Enterprise Institute, said that Biden’s order is “likely to do away with cost-benefit analysis by elevating unquantifiable aims as benefits and deny costs of regulation altogether.”

COVID-19 status update: As of Thursday afternoon, the Georgia Department of Public Health reported the number of cases since the pandemic began was at 763,077, up from  737,205 a week ago. Deaths were at 13,048; last week the total was 12,280 deaths. The department updates the information daily at 3 p.m. Visit the website here.

Vaccine count: The United States has administered more than 32.7 million of the 52.6 million COVID-19 vaccine doses delivered by Moderna and Pfizer-BioNTech, according to the Centers for Disease Control and Prevention. As of Monday, Georgia had distributed 60% of its allotment and vaccinated 7.7% of the population. Source: News reports

Crisis? President Biden cited the “climate crisis” in his executive order requiring “that climate considerations shall be an essential element of United States foreign policy and national security.” A new study by Indur M. Goklany reports, however, that food production per capita has increased by 30% since 1961 despite a more-than-doubling of the global population, and hunger and malnutrition have declined. Additionally, area burned by wildfires has declined. Since 1950, poverty has been declining, people are wealthier and global life expectancy has increased from 46 years to 73 years.

Foundation in the media: The Citizen published Benita Dodd’s commentary on National School Choice Week. The Foundation is a signatory to a Philanthropy Roundtable letter to Congress opposing “unnecessary and arbitrary regulations on donor-advised funds.” The Rome News-Tribune, Augusta Chronicle and Albany Herald quoted Chris Denson in an article on Medicaid expansion. The Times-Georgian published a report by The Center Square on the Foundation’s new study on the benefits of Education Savings Accounts (ESAs). The Heartland Institute also reported on the ESA study. The Atlanta Journal-Constitution quoted Benita Dodd in an article on President Biden’s climate change executive order.

This month in the archives: In February 15 years ago, the Foundation published “Telework: Transporting Workers into a Global Economy.” It noted, “Telework is increasingly essential to contemporary organizations competing in a technology-based world. Much like turning an obese baby-boomer into a trim, active athlete, an organization that has retained obsolete, Industrial Age work and management habits will struggle with the transition. Meanwhile, the competitors of organizations fat with expensive, emptying offices are becoming the biggest winners.” Today, because of the COVID-19 pandemic, telecommuting has become a way of life for many Americans – and many say they prefer to continue doing so once the pandemic is over.