Friday Facts is coming to you a day early to beat the holiday rush!

Have you registered yet for the 2020 Georgia Legislative Policy Forum? 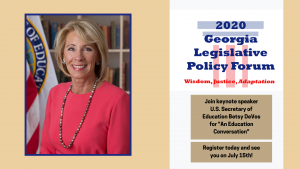 The Forum, hosted by the Georgia Public Policy Foundation since 2010, takes place as a series of weekly Zoom webinar events beginning July 15. The theme is “Wisdom, Justice, Adaptation,” a play on the state motto: “Wisdom, Justice, Moderation.” This year, the Forum comprises eight sessions, including two keynote sessions. The topics: Education; The Budget; Land Use and Transportation; The Economy; Housing; and Healthcare. Sign up now for the opening keynote session, “An Education Conversation,” with U.S. Secretary of Education Betsy DeVos. There is no charge, but attendees must have authenticated Zoom accounts. Read more here; register here.

“I have often … in the course of the session … looked at that sun behind the President without being able to tell whether it was rising or setting. But now at length I have the happiness to know it is a rising and not a setting sun.” – Benjamin Franklin

“Heaven knows how to put a proper price upon its goods; and it would be strange indeed if so celestial an article as Freedom should not be highly rated. – Thomas Paine

“The happy Union of these States is a wonder; their Constitution a miracle; their example the hope of Liberty throughout the world.” – James Madison

K-12 funding: Gov. Brian Kemp noted as he signed the FY 2021 budget, “To keep Georgia moving in the right direction and minimize the long-term impact of COVID-19 on our classrooms, this budget fully funds enrollment growth and training for public school education. It recognizes a 7.8% increase in enrollment at state charter schools, and this budget provides $55 million in additional lottery funds for the HOPE Scholarship to meet projected demand. With 53% of the 2021 budget dedicated to education, we continue to put students first.”

Piggy bank: While there were many complaints about cuts in the education budget, Foundation President Kyle Wingfield’s weekly syndicated column revealed a well-kept secret. “You may recall that, when the pandemic hit, the entire state government’s reserves were $2.8 billion. Well, as of June 30, 2019, which was the end of the previous fiscal year, the state’s 180 public school districts held some $3.2 billion in reserves. … So, our public schools statewide had more money in reserve than the entire state of Georgia – which itself was better placed than most states.” Source: Daily Citizen-News (Dalton)

Choice matters: In an enormous win for education choice, the U.S. Supreme Court ruled this week that barring religious private schools from a state tax credit scholarship program violates the U.S. Constitution. A Georgia Public Policy Foundation news release called the ruling in a Montana case “a validation of the right of parents to choose the best education option for their children.”

Road trip: AAA forecasts Americans will take 700 million trips based on economic indicators and state re-openings. That number is down nearly 15% compared to last July through September and is the first decline in summer travel since 2009. Air travel is expected to be 74% lower, while rail and cruise travel will decline 85%. On the bright side, with low gas prices, road trips will decline just 3% despite the pandemic, comprising 97% of summer travel after averaging 87% over the past five years.

Rockets’ red glare: With cities across the nation canceling public displays this Independence Day, sales of fireworks are booming as more families opt to put on their own shows. Ohio-based Phantom Fireworks, which has approximately 80 stores nationwide and supplies thousands of retailers, had planned on a 15% increase in sales this year, but estimates sales are around 115% higher than 2019. Source: USA Today

To mask or not: Savannah’s mayor was the first to issue a citywide executive order, this week mandating the wearing of masks in public places. Gov. Brian Kemp, who began a statewide tour Wednesday to promote wearing masks, said he would not issue a mandate and has not yet weighed whether to  challenge local governments’ efforts to require masks. Georgia faces a spike in confirmed coronavirus cases and hospitalizations. Source: Marietta Daily Journal

Growing list: The regulations suspended by federal, state and local governments for the duration of the pandemic now number at least 725, according to Americans for Tax Reform.

This month in the archives: In July 25 years ago, the Foundation published, “Taxpayers’ New Worry: Your Money Or Your Land.” It noted, “Policy-makers need to stop being big spenders and to show restraint or it becomes their fault when the bulldozer ends up at your doorstep to ‘improve’ the neighborhood’s tax base so that government can get more to pay more for more programs and services.

Have a great weekend and a Happy Independence Day.