Thanks to our supporters for helping the Georgia Public Policy Foundation earn its 2019 badge as a Great Nonprofits’ “Top-Rated Nonprofit,” the second consecutive year we’ve achieved this honor. Click here to read reviews of the Foundation!

“Congress is continuing what is now a bipartisan tradition. In the first two decades of the 21st century, real federal spending has increased by 70.7%. … When Republicans and Democrats work together in Washington, D.C., today, it is not to cut a bloated federal government but to cut the chances this nation will be solvent and prosperous for our children and grandchildren.” – Terrence Jeffrey

“Public pension funds in the U.S. are generally structured so that their participants are guaranteed a certain amount of income upon retirement. To achieve this, employers invest their assets (stock, bonds and annuities) in a portfolio that’s expected to generate sufficient returns to cover future pension obligations. So when the portfolio returns less than expected … the responsibility of making up for the lost income falls on the plan’s sponsor — in this case, the government. And the government finds those additional funds by raising taxes or cutting services.” – Jen Sidorova

“Whether we look at capitalism, taxes, business, or government, the data show a clear and consistent pattern: 70% of Americans support the free enterprise system and are unsupportive of big government.” –  Arthur C. Brooks

Solutions: In what one health expert called, “a really big deal,” Gov. Brian Kemp and Lt. Gov. Geoff Duncan joined forces Thursday to announce a plan that would give more Georgians access to affordable healthcare. Kemp called it a “Georgia-centric approach.” Georgia Access includes a state reinsurance program intended to lower premiums for Georgians. The state will also seek federal waivers from using healthcare.gov, the federal exchange, and to empower small businesses and entrepreneurs to contribute to their employees’ insurance. The governor also announced he will unveil a plan Monday to seek waivers to assist in coverage for 400,000 low-income, uninsured Georgians. Source: News reports

Outsourcing: Walgreens is getting out of the walk-in clinic business as it cuts costs and looks to bring in outside providers. The chain announced this week it is closing the 160 in-store U.S. health clinics the company runs itself while keeping 220 clinics run by local health systems. In North Georgia, Walgreens clinics are run by Piedmont QuickCare. Walk-in clinics at both Walgreens and CVS are barely breaking even; both companies plan to focus on people with chronic conditions such as diabetes, heart disease and hypertension. Source: Wall Street Journal

Telehealth: Teladoc Health, the global leader in virtual care, posted a 45% increase in total visits for the third quarter of 2019, which ended September 30, over the same period last year. For 2019, it anticipates total patient visits of between 3.9 million and 4.1 million. 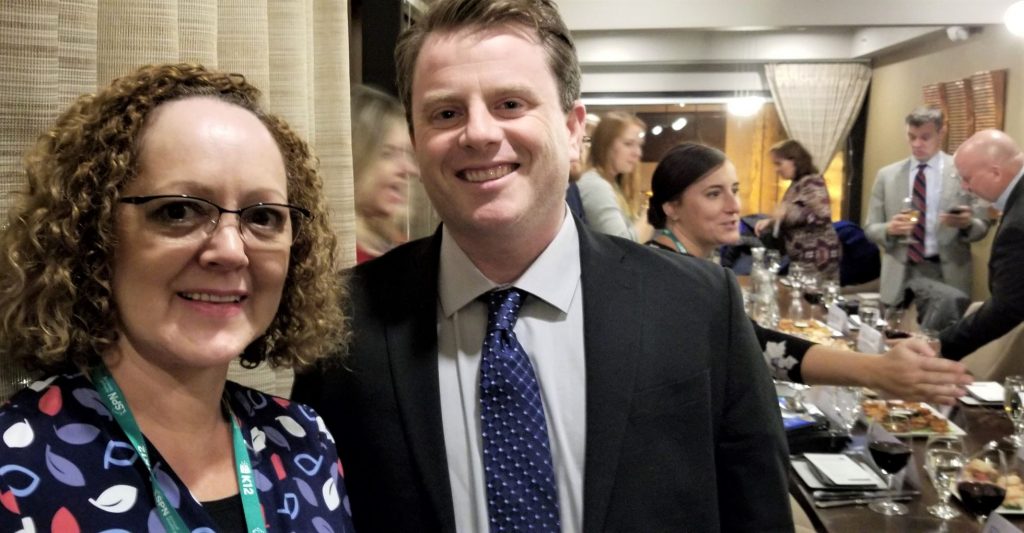 Above: Foundation Vice President Benita Dodd had a chance to chat with Mercatus Center Senior Research Fellow James Broughel this week before his presentation on regulatory reform in the states during the State Policy Network’s 2019 Annual Meeting in Colorado Springs, Colo. Broughel will discuss the status in Georgia on November 15 at the Georgia Legislative Policy Forum.

ACT scores: High school seniors in Georgia’s class of 2019 scored about the same on the ACT college admission test as the class of 2018. The average composite score stood unchanged at 21.4 out of a possible 36. Just 49% of Georgia students took the test, four percentage points fewer than the class of 2018. Just 40% of Georgia test takers met the math benchmark; just 39% met the science benchmark. Source: Atlanta Journal-Constitution

What state? Truth in Accounting has released its 10th annual Financial State of the States report. State budget transparency has increased over the past few years with the Governmental Accounting Standards Board requirement that governments disclose pension and other post-employment (OPEB) benefits on their balance sheet. Alaska earned an “A” grade, best in the nation with a surplus of $74,000 per taxpayer; New Jersey earned an “F”, worst in the nation with a taxpayer burden of $65,100. Georgia, which earned a “C” grade, is No. 22 with a per-taxpayer burden of $3,500.

Don’t renew: The stated goals of the Renewable Fuels Standard (RFS ) were to reduce reliance on foreign energy and to move toward cleaner fuel sources, notes Veronique de Rugy of the Mercatus Center, but “It falls short on both fronts.” The federal requirement to blend ethanol with gasoline has existed since 2005. She proposes “eliminating the mandate and its market distortions altogether.”

Tail of 10 cities: Atlanta-based Orkin ranked the nation’s most rat-infested cities of 2019. Chicago was No. 1 for the fifth year in a row. New York and Los Angeles were in second and third place, with San Francisco-Oakland, Washington, DC, and Philadelphia rounding out the top five. Atlanta made the “top” 10 this year, at No. 10. We suspect much of Atlanta’s rodents are relocating amid the construction resurgence in the metro area.

This month in the archives: In November 25 years ago, the Foundation published, “Whatever Happened to the Tenth Amendment?” It noted, “Politicians enjoy telling their constituents that they can give them clean air, clean water, and access for the disabled.  What they don’t like telling voters is that implementing these programs costs money.  So, rather than raise federal taxes, members of Congress pass the costs down the line.  In the end, however, the same taxpayer gets stuck with the bill.”

Visit www.georgiapolicy.org to read the Foundation’s latest commentary, “Shining a Light on the Administrative State,” by James Broughel.

Have a great weekend, and don’t forget to turn back time!

FRIDAY FACTS is made possible by the generosity of the Georgia Public Policy Foundation’s donors. If you enjoy the FRIDAY FACTS, please consider making a tax-deductible contribution to help advance our important mission by clicking here. Visit our website at www.georgiapolicy.org.