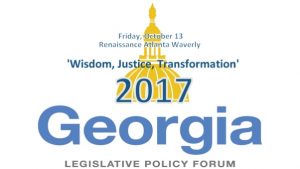 VIP opportunity:  Attend Health Connect South 2017 on September 28 at the Georgia Aquarium at no charge! In partnership with Georgia Public Policy Foundation, Health Connect South is pleased to offer 20 complimentary registrations to the conference on a first come, first serve basis to Foundation members.  If you are not one of the first 20, you can still get a 20 percent discounted ticket.

“Society in every state is a blessing, but government, even in its best state, is but a necessary evil; in its worst state an intolerable one; for when we suffer or are exposed to the same miseries by a government, which we might expect in a country without government, our calamity is heightened by reflecting that we furnish the means by which we suffer.” – Thomas Paine (1776)

“Above all, we must realize that no arsenal, or no weapon in the arsenals of the world, is so formidable as the will and moral courage of free men and women. It is a weapon our adversaries in today’s world do not have.” – Ronald Reagan

“For the sake of people’s health and safety, it’s critical that we also stop paying to repeatedly rebuild flood-prone properties. Thousands of Americans are being paid as much as or more than their insured properties are worth.” – Sean Duffy, Earl Blumenauer

Technology triumphs: Two of the world’s top pipeline companies are piloting a system that uses fiber optics to avoid spills. Enbridge Inc. and TransCanada Corp. will thread the technology inside or alongside a pipeline to pinpoint leaks and other disturbances to within a half-inch. The current cost to install is about $4 a foot, which represents about 0.5 percent of the cost of a new pipeline construction.

Educating on choice: Asked for all of the reasons they do not have a child participating in one of Indiana’s school choice programs, more than one third of parents said they were unaware of the choice programs, according to a survey by EdChoice.

Credit loss: On average, students who transfer between colleges lose about 43 percent of their course credits, according to the Government Accountability Office (GAO). Those who transfer between public schools – the majority – lose about 37 percent of their credits. The GAO suggests students face challenges getting information or advice about transferring credits – a serious concern, given the added cost to their education.

Litigation: The U.S. Chamber Institute for Legal Reform’s Lawsuit Climate Survey finds attorneys linked to large companies are not impressed with Georgia courts’ reasonableness or fairness. Georgia ranked No. 40 overall, alarming considering 85 percent of respondents said a state’s litigation environment is likely to impact important business decisions such as where to locate or do business.

Last chance: As Congress makes a last-ditch effort to overhaul ObamaCare this year, Jonah Goldberg notes the problem with Medicaid expansion in the states: “If you had an expense account where someone else covered most of the tab, how eager would you be to control costs?”

Listen up: Hearing aids that can cost more than $2,000 apiece are only slightly more effective than some over-the-counter sound-amplification devices that sell for just a few hundred dollars, according to a recent study. Source: Kaiser Health News

Lower taxes: While overhauling the whole U.S. tax code would be great, if the goal is economic growth, the first priority is to reform the corporate tax system, according to Veronique de Rugy of the Mercatus Center. This would “boost the economy, American competitiveness and job creation the most. A corporate tax reduction would boost standards of living through higher wages, too. That’s because the majority of the corporate tax is shouldered by workers, in the form of lower wages.”

Marriage: Syndicated columnist Star Parker comments on the decline of marriage in America and cites “modern research that shows that individuals who are married are wealthier, healthier and happier.” Recent research points to married men earning at least $15,900 more annually than single men; for black men, this “marriage premium” is $12,500. Source: Patriot Post

This month in the archives: In September five years ago the Foundation published, “Medical Malpractice Reform Can End Insult to the Injured.” It noted, “Even on the rare occasion that a lawyer agrees to take a case, patients often wait years before receiving very little compensation. It takes an average of four years for a case to be resolved in court and, because of litigation expenses and other transaction costs, victims keep only 40-60 percent of their damages as compensation.”

Foundation in the news: The Coastal Courier published “SPLOST reform needed in Georgia,” by Ron Sifen and Benita Dodd. The Marietta Daily Journal published a letter to the editor from Benita on the county’s land use plan.