Last chance to reserve your seat! It’s just one week to the 2014 Georgia Legislative Policy Forum, which takes place Friday, September 19. Keynote speakers are Herman Cain and Clint Bolick, and sessions on tax, education and health care reform in Georgia feature state and national experts. The theme is “Tearing Down Walls,” in recognition of the Fall of the Berlin Wall 25 years ago, with a special segment marking the anniversary. Find out about this “opening act to the legislative session” and register at www.georgiapolicy.org/?p=3264.

It was our pleasure: Our condolences to the family, friends and employees of Chick-fil-A owner S. Truett Cathy, who died this week at age 93. In 1996, the Foundation honored Cathy with the Georgia Freedom Award. On our YouTube channel, view the awards ceremony, with Former Gov. Joe Frank Harris and Foundation Founder Hank McCamish honoring this great philanthropist and advocate for children. We promise: It’s worth it! 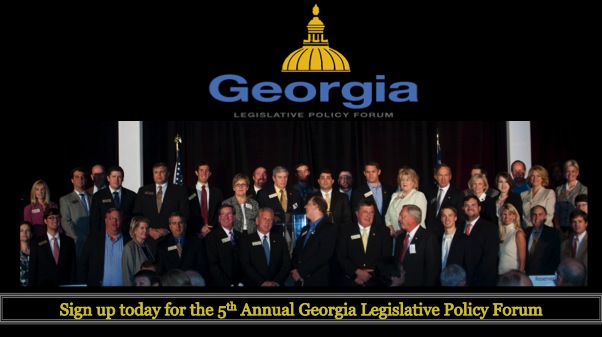 “The real problem is not a ‘Wrong Way America’ that gets in the way of middle- and working-class housing supply, but ‘Wrong Way Cities’ (metropolitan areas) that have adopted land use regulations severely restrict the supply of land for urban development. The price-increasing policies are often referred to as ‘smart growth’ or ‘urban containment’ and routinely involve restricting the supply of land for development through urban growth boundaries, large lot suburban, and exurban zoning and other strategies.” – Wendell Cox

“Education options in low-income communities – charters, vouchers and tax credits for private schools – is the best hope for eliminating multigenerational poverty and the possibility of more tragedies like that of Michael Brown.” – Star Parker

Sept. 22: “Rockin’ The Wall” – about the impact of music on the Fall of the Berlin Wall is sponsored by the Foundation and showing at the Earl Strand Theatre in Marietta. 7 p.m. Reserve tickets online here, the first 50 advance tickets will be eligible for a drawing of five copies of the soundtrack.

Kudos to Georgia Governor: Governor Nathan Deal declared his support for a statewide Recovery School District in Georgia at an event this week with Louisiana Gov. Bobby Jindal, whose state pioneered the system. It would enable the state to convert low-performing schools to public charter schools.

This Foundation has focused on education opportunity since it was established in 1991. In April, Matt Candler of 4.0 Schools spoke at a Foundation event about New Orleans schools’ turnaround; Chris Barbic of Tennessee ASD will speak at our November 18 event (See Events). Upcoming: “Tearing Down the Wall to Education Opportunity and Choice,” at the September 19 Legislative Policy Forum!

Kudos to Georgia Tech: The engineering college climbed to fourth in the annual undergraduate engineering program rankings released by U.S. News & World Report this week.The Stewart School of Industrial and Systems Engineering is again No.1 among similar schools, while Tech’s programs in aerospace, biomedical, civil, environmental and mechanical engineering are all ranked in the top five in the nation in their respective categories.

Numbers game: The state’s education spending has changed with the economy, not because of politics. And while the amount may have changed, an analysis by the Foundation found that its share of the state budget has remained fairly consistent – even when other agencies suffered deeper cuts.

Express toll lanes (ETLs) are coming to Georgia, and Bob Poole of the Reason Foundation dispels some allegations about ETLs: “Opponents of variable pricing always concoct a scary figure for how much it would cost to use the ETLs.” In North Carolina, opponents’ claims of $21 per day assumes that commuters would each (a) make a 52-mile round trip the entire length of the ETLs, (b) do this every day, and (c) always drive during the highest-priced peak period. “Ample evidence from ETLs around the country shows that most people who use the lanes do so only for especially time-sensitive trips, typically once or twice a week. And of course on a 26-mile long facility, many will use only a portion of it, paying a proportionally smaller toll,” Poole points out. Read more here.

Water under the bridge: The Atlanta Watershed Department is in shambles. Among its problems: a missing $80K backhoe and at least 10,000 water meters! In 2003, we published a paper on the water department’s privatization effort, which wasn’t working. (Read why here.) The paper concluded, “The City of Atlanta is at a crossroads. It can … opt to bring operations back in-house – possibly a political popular move but not a fiscally sound one. Is there any indication that in-house operations will be any better than they were before when privatization was sought out to fix the system?” That question has been answered.

Six of the best: Topping Forbes magazine’s list of cities with the best outlooks for jobs in the fall is Dallas, followed by two other Texas cities. Texas has no income tax, as do two other states with six of the top 12 cities: Washington and Florida. For reference: Just nine U.S. states don’t tax earnings from wages. The Georgia Legislative Policy Forum on September 19 has a session on tax reform for Georgia. Register here.

On September 10, 2004, the Foundation published the Land Use chapter of “Agenda 2004: Guide to the Issues,” which included this point: “Policy-makers would do well to consider the consequences of restricting or overregulating such conversions in an attempt to preserve rural lands or green space in urban areas, because they have great potential in urban settings: A mixed-use development in Fayetteville, the Villages of Lafayette, is able to take shape just off the city’s courthouse square, thanks to the flexibility provided by the purchase of a 110-acre farm tract.”

Web site of the Week: We’re proud to promote our very own YouTube channel this week, which has passed the 55,000 mark on views! Go to http://bit.ly/1ickbkL to view recent and historical events.

Visit www.georgiapolicy.org to read the latest commentary, “Getting Smart on Crime Puts Georgia Ahead,” by Mike Klein.