Here’s something you might not know about the Savannah River and Harbor expansion project.  Georgia sturgeon living about 130 miles up the river would get a new bypass to their spawning grounds.  In fact, $225 million or about one-third of total cost has been allocated to environmental mitigation, including the purchase and permanent preservation of some 2,000 shoreline acres.

Dredging the Savannah River and harbor to 48 feet from its current 42-foot depth is quite possibly Georgia’s most significant economic development project since Atlanta was rebuilt after the Civil War, or perhaps more realistically, the development of Atlanta’s international airport.

It is nearly impossible to overstate the critical nature of this $625 million venture.  With an improved Savannah River and harbor, Georgia remains on the world stage.  Without it, well, you really don’t want to think about that.

There was a full court press behind SHEP – the Savannah River and Harbor Expansion project – on Wednesday at the fourth annual Georgia Logistics Summit in Atlanta.  Governor Nathan Deal told 1,500 conference guests that federal decisions are close-at-hand, probably this summer.  “We are doing everything in our power to move that project forward,” Deal said during his keynote address.

Savannah is the world’s shallowest major port.  It is unable to accommodate larger international tankers that will begin to transit the Panama Canal in 2014.  “Deeper than you are today is important,” morning keynote speaker Curtis Spencer told reporters during an informal roundtable.   Spencer is President and CEO of IMS Worldwide, Texas-based consultants in worldwide shipping logistics.

Despite Savannah’s current depth – again, shallowest major port in the world – it is wildly successful.  Industry data shows the Savannah Garden City Terminal is the fourth busiest and fastest growing port in the nation during the past decade.  Los Angeles, Long Beach and New York – New Jersey are the busiest ports.   The Charleston, South Carolina port was tenth busiest during between 2005 and 2011.

Larger ships will dwarf today’s supertankers that currently travel up the Savannah River. They will be longer, taller and their width will nearly double.   “Ships aren’t going to change to accommodate us,” Georgia Ports Authority executive director Curtis Foltz said during his luncheon keynote address.  “That’s why it’s so important that we get this project done as quickly as possible.” 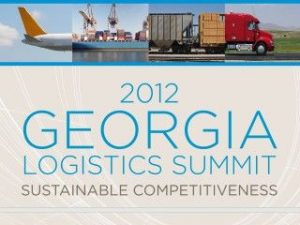 Seventy percent of the U.S. population lives in the eastern one-third of the country with 44 percent living in the Southeast.  “That’s our back yard, “Foltz said.  “That’s what our ports are built to service.” Some 62 percent of all import and export trade from Savannah is with Asia.

Congress approved a U.S. Army Corps of Engineers harbor deepening study way back in 1999.  It took ten years to complete the study and now another two years for other federal officials to analyze the findings.  Contrast that with Panama which started the Canal expansion project in 2006 and will complete all work before 2014.  Georgia hopes the federal approval and funding process would enable work to begin next year.

The federal government and Georgia would share Savannah improvement costs in a 60 – 40 split.  Georgia previously committed $134 million and Governor Deal included $47 million in new bonds in his next budget.  The project includes $400 million to dredge and $225 million for environmental mitigation.  The entire cost was estimated at about $250 million when this conversation began back in 1999.

Governor Deal said some 21,000 U.S. businesses ship through Savannah each year and three-fourths of those businesses are headquartered outside Georgia.  The Governor said a deeper Savannah River and Harbor could save businesses up to $100 million per year over other their next best trade route options.

Georgia’s fourth annual logistics summit attracted 1,500 guests from 28 states and seven countries to the World Congress Center in Atlanta.  The summit is tag-teaming this year with MODEX, the gigantic logistics industry trade show that opened Monday.  Governor Deal announced that the state’s new comprehensive freight plan is complete and will be released later this month.

Deal also lobbied for passage of this summer’s transportation referendum vote that could unleash billions of dollars for local transportation projects, including some that would affect freight logistics. Voters in twelve regions statewide will vote thumbs up or down in July.  The state business sector is solidly behind the referendum and it is prepared to spend millions of dollars advocating passage.