ZPolitics’ inaugural issue of Capitol Faces contained an article by Benita Dodd, vice president of the Georgia Public Policy Foundation.  The article is published below; the zpolitics link is here.

WANT TO BUILD GEORGIA’S ECONOMY? PUSH BACK ON AN OVERREACHING EPA 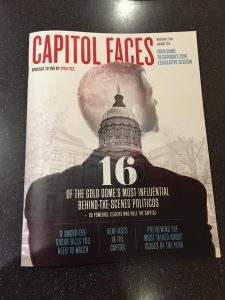 Like the federal Environmental Protection Agency’s occasional field hearings, Georgia legislators and policy-makers are inundated by environmental activists with emotional but outlandish claims about the devastation that will occur unless Regulation X or Bill Y are implemented or Activity Z is prohibited.

Back in May 2011, it was the “mercury rule,” a regulation that would affect power plants responsible for nearly half of the power generation in the nation. The Georgia Public Policy Foundation testified at the EPA’s Atlanta field hearing in June 2011, pointing out that “Mercury, cited as the issue of greatest concern, is just not that hazard that it once was. Today, there is certainly no indication that mercury is increasing in Georgia’s environment.” (Read the Foundation’s testimony here: http://bit.ly/1mCgHRE.)

The Foundation added, “Taking money out of Americans’ pockets needlessly to implement air quality regulations that are unnecessary in order to force this country off reliable, affordable and cleaner than ever fossil fuel power generation is no way to a better quality of life.”

Undeterred by legal challenges, the EPA forged ahead with the mercury rule. By the time the U.S. Supreme Court remanded the rule in June 2015, noting the EPA should have taken costs into account when first considering the rule, utilities had already eliminated 40 GW of low-cost coal-fired power – enough to power 30 million homes.

As EPA Administrator Gina McCarthy had predicted just before the court ruling, in arrogant EPA fashion, “But even if we don’t [win in court], it was three years ago. Most of [the utilities] are already in compliance, investments have been made, and we’ll catch up.”

Now the EPA has moved on to its “carbon rule,” the Obama Administration’s Clean Power Plan. And the tactics are the same. Formalized late on a Friday in October, the plan to cut “carbon pollution” – by McCarthy’s own admission – won’t make any difference to carbon emissions in the United States … or anywhere. Its goal is merely to set an example to the rest of the world.

In 2015, some of Georgia’s barrier islands were flooded during unusually high tides. At the November EPA field hearing in Atlanta, environmental activists cited the flooding as a reason to implement the Clean Power Plan; nobody bothered to inform them that the barrier islands were, in fact, created by changing tides.

While utilities resist some EPA measures, they accept others: They can recover and pass through much of the cost of compliance. Ratepayers, however, will hurt, and in more ways than one. As the Foundation testified in November, “Consumer prices will increase; the cost of doing business will increase, causing more job losses (or shrinking job creation); more businesses will move off-shore, and Americans will deal with the price volatility of natural gas to replace the plentiful, reliable fuel source of coal.” (Read the Foundation’s testimony here: http://bit.ly/1It2l07.)

Joining 23 states suing in opposition to the plan, Georgia Attorney General Sam Olens called the plan a “classic example of the Obama Administration’s pattern of attempting to accomplish with regulation what it cannot achieve with legislation.”

“The Obama Administration once again is trying to increase the cost of electricity for Georgia families and businesses using unconstitutional rules and regulations,” he said.

It’s encouraging to know the Legislature opposes this outrageous, expensive power grab disguised as a power plan. The EPA must not be allowed to intimidate Georgia into any premature implementation of this allegedly “flexible” plan.

It’s crucial for Georgia’s economy and sovereignty that in 2016, and until this nation enjoys leadership that embraces federalism and limited government, EPA learns that resistance isn’t futile.