Do they spend less? Do other sources of revenue make up for lower income taxes? Or is it something unique that Georgia can’t duplicate?

Georgia’s personal income tax brings in more than $8 billion a year, or $878 per capita. The challenge is to identify $878 per capita of spending cuts or other revenues to make up the difference. 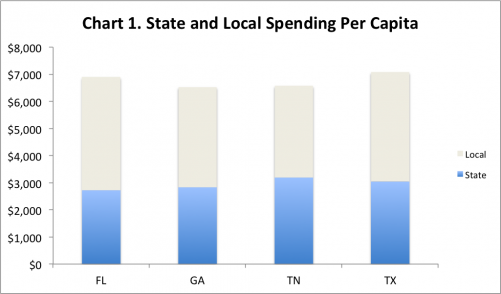 Spending: States must balance their budgets, so lower taxes require lower spending. Looking at Georgia’s state and local spending per capita (Chart 1), overall, Georgia spends less than Florida, Texas and Tennessee; at the state level only Florida spends less than Georgia by $111 per capita.
(It’s important to look at state and local spending together because states allocate spending for major functions like education and health care in different ways.)

Federal funds: Do the no-income tax states get more revenue from the federal government? Georgia is right in the middle (Chart 2): more federal funding than Florida, about the same as Texas and $206 per capita less than Tennessee.

Even reducing state spending to Florida’s level and increasing federal funding to match Tennessee would provide only about one-third of the money needed to eliminate Georgia’s income tax.

Taxes: Georgia’s overall taxes are $218 per capita higher than Tennessee but lower than Texas and Florida (Chart 3). Georgia’s state taxes are lower than all three states. The biggest difference is the sales tax, with all three states much higher than Georgia. Not only are the state sales tax revenues and rates much higher, but the tax base is much broader than Georgia because these states tax more services.

Georgia and Tennessee rely on relatively high average local sales tax rates as well. Florida and Texas rely more on property taxes at the local level, with per capita amounts $213 higher in Florida and a whopping $558 higher in Texas.

Is there anything unique about Texas, Tennessee or Florida that might explain the difference?

Texas has oil and gas revenues
that the other states do not. An Oil Production Tax brings in $113 per capita, not as much as you might think. It’s also volatile, having fallen by nearly 50 percent in 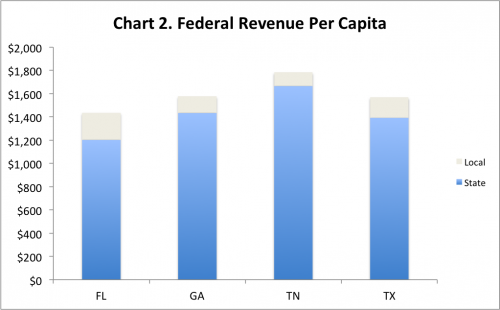 just the last two years. Texas is also one of four states that impose a type of gross receipts tax, bringing in $181 per capita. Both liberal and conservative economists agree that this is one of the worst taxes possible; it’s one that Georgia would not want to duplicate.

Florida has tourism, which means it likely gets more revenue out of its sales tax than most states. Tennessee doesn’t appear to have any unique characteristics to note.

When looking for where Georgia can find an extra $878 per capita to replace its personal income tax, these broad categories do not provide an obvious answer. Reducing state spending to Florida’s level gets you $111, but that needs to be offset by recognizing Florida’s spending at the local level makes up for the lower spending at the state level.

It’s long been said that maximizing federal revenue is the first rule of state budgeting, but even increasing federal revenue to Tennessee’s level would only amount to $206 per capita. (Don’t forget Georgians must pay federal taxes, too!)

On the tax front, raising property taxes is a political loser and exclusively a local tax. Sin taxes don’t bring in much revenue and, if they work, revenue actually declines. 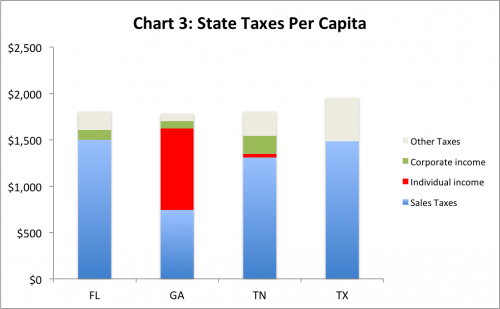 The only major tax source left is the sales tax. And, with many Georgia citizens already paying 8 percent sales tax, a rate increase is unlikely. This means the focus should be on broadening the sales tax base. The first step would be to look at the services already taxed by our neighboring states. Ultimately, a broad sales tax like the FairTax could replace Georgia’s income tax with a rate of somewhere between 5.4-6.4 percent (compared to the current rate of 4 percent).

Any talk of a sales tax increase leads to concerns that it would affect the poor disproportionately. Studies show that negative impacts can be offset by tax credits for low-income individuals.

State tax reform is difficult. Studying states like Florida, Tennessee and Texas highlight the difficult – but worthwhile – steps Georgia must take to join the ranks of these states that don’t tax their citizens’ personal income.

Note: This graphic from the Pew Charitable Trusts provides a useful visualization of state tax revenue sources for all states.

© Georgia Public Policy Foundation (October 28, 2016). Permission to reprint in whole or in part is hereby granted, provided the author and his affiliations are cited.