“Starting Early” was the topic when Katharine Stevens of the American Enterprise Institute, delivered the breakfast keynote at the Georgia Legislative Policy Forum in November 2019. From the astonished audience expressions as Stevens detailed the critical role of early childhood development, it could have been called “Startling Early.”

Few in the audience could have anticipated how, just a few short months later, the nation would be rocked by a novel coronavirus. And nobody could have imagined the ensuing turmoil, especially in the education of millions of children. As testing is cast by the wayside, Stevens’ latest work raises more concerns about the children’s future: Obfuscation, she argues, hides the academic lag in those who most need help.

“Still Left Behind: How America’s Schools Keep Failing Our Children” is co-authored by Stevens and Meredith Tracy. They focus on 2003-2017, during the federal No Child Left Behind law – “the most sweeping education reform legislation since 1965.” They found a slight decline in the average national percentage of eighth graders identified as lower income who scored below Basic in math and reading in the National Assessment of Educational Progress (NAEP), the “Nation’s Report Card.” But, they found, “performance across states was highly uneven.”

The report notes there was some notable improvement. Still, there is “an under-examined aspect of public schooling: the persistently low achievement outcomes of lower income students, often obscured by a prevailing focus on incremental improvements in average scores.” To wit:

And what of the return on investment? The answer, in so many cases, is to throw more money at the problem. The authors note, however,  “state NAEP outcomes are often reported without the important context of state-level per-student expenditures that those outcomes cost to produce.” 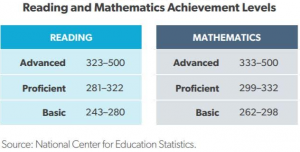 The authors point out, however, that over this period, the children counted as “lower-income” – those eligible for free and reduced-price lunch (FRL) – increased dramatically across the country, even as poverty barely increased. From 2003 to 2017, the average national percentage of eighth graders below the federal poverty line rose just slightly, from 15% to 16%. Over that same period, eighth graders who were FRL-eligible increased from 33% in 2003 to 46% in 2017 and more than doubled in several states. In 2017, that group clearly included a much higher percentage of wealthier children. The Atlanta Public Schools is among the districts offering free meals to all students, regardless of family income — all of whom are counted as “lower-income” in many analyses of student achievement.

The 85-page report — including one-page snapshots for each state — holds remarkable insight for those trying to compare and contrast education outcomes. And, especially amid the complications of COVID-19, it highlights the need for ongoing testing, with greater discernment, to understand just who is left behind, and why.

© Georgia Public Policy Foundation (October 9, 2020). Permission to reprint in whole or in part is hereby granted, provided the author and his affiliations are cited.