My remarks will focus on tax policy principles, analysis of two recent state tax reforms, myths associated with tax reform and suggestions for a way forward for Georgia.

Tax revenue is necessary to fund core government functions. The goal of tax policy is to raise those necessary funds while minimizing the impact on economic decision making.

Surprisingly, there is broad agreement from economists across the political spectrum on what constitutes good tax policy. This can be very simply stated as: 1) broadening the tax base and lowering rates, 2) not applying the sales tax to business inputs and 3) favoring consumption taxes over income taxes to encourage economic growth.

A broad tax base means minimizing exemptions. Every special exemption requires an increase in the rate to make up the difference. The next time someone suggests a special exemption, no matter how well intentioned, remember to ask yourself if it justifies asking everyone else to pay more.

The exception to this rule is applying a sales tax to business inputs – what some would consider the worst possible tax. Unfortunately, due to how the sales tax code evolved decades ago, goods are automatically taxed unless specifically exempted and services are automatically exempted unless specifically taxed. This makes appropriate taxes, such as taxes on consumer services, and appropriate exemptions, such as the exemption for raw materials, appear to be subjective.

Finally, tax reform should ensure fairness. Although everyone who utilizes government services should pay some tax, there should be consideration of excessive tax burdens on those at the lower end of the income scale. In addition, individuals in similar situations should be taxed similarly. This issue of fairness is typically the area of tax reform that leads to the greatest disagreements.

Kansas reduced its income tax revenue by $800 million, or about 30%, in 2012. To put that in perspective, a 30% income tax cut in Georgia would equal $2.85 billion. The intent was to reduce the size of government, but Kansas lawmakers failed to cut spending, which resulted in a budget crisis.

A better example for Georgia is North Carolina, which passed legislation that lowered income tax rates from 7.75% percent to 5.75% in 2013. North Carolina is similar in size to Georgia. The expected loss of revenue was $500 million, but actual revenues were $400 million higher than expected. A revenue surplus due to strong growth in business income[1] led North Carolina to pass another round of tax cuts this year[2], lowering their personal income tax rate to 5.499%.

In North Carolina, median household income since the year before tax reform was enacted to 2014 has grown by $5,231, or more than $2,500 more than the national average.

This should be taken with a note of caution, since this is just one measure and there are many factors that influence state economic growth. However, since economists generally agree that shifting from income taxes to consumption taxes is pro-growth, these figures do support the theory. It’s also import to note this is not average income, which could be skewed if only wealthy families saw an increase in income. The median literally means the middle, so this is a very good indicator of how these reforms impacted middle class, working families.

The impact of economic growth is important to remember since a revenue neutral tax reform will produce winners and losers. How many middle class Georgia families could use an extra $2,500? If you offered these families the option of the status quo or paying, say, $50 in higher taxes in exchange for higher income, what do you think they would say?

1) Broadening the sales tax base can enhance growth and lower volatility.[3]

2) Standard & Poor’s[4] has cited as a positive Washington State’s “sales tax-based revenue structure that exhibits sensitivity to economic cycles, but to a lesser degree than those of states that rely primarily on personal and corporate income taxes.” (Washington State does not have an income tax.)

3) Bond rating agencies also prefer states to have the flexibility to raise taxes if necessary. Georgia cannot raise its personal income tax rate without amending the Constitution, which is very unlikely. Therefore, reducing the income tax rate would return that flexibility.

All three points show that tax reform can actually strengthen the fundamentals that determine a state’s bond rating.

Tax reform only benefits the rich, to the detriment of the poor and middle class

The accusation that North Carolina’s tax reform raised taxes on an estimated 80 percent of North Carolinians has been proved false. The Washington Post gave this claim “Three Pinocchios” saying “On its face, it is pretty absurd to think that a tax reform bill that cut rates and eliminated tax loopholes ended up raising taxes on 80 percent of the people in the state. Broadly speaking, the wealthy do appear to gain more from the 2013 tax overhaul, but they also pay the lion’s share of income taxes. And 35 percent of the people appear to face a tax increase, including some of the wealthiest people in the state – not 80 percent, all at the bottom.”[5]

Georgia State University (GSU) recently published a study[6] examining the impact of eliminating Georgia’s corporate and personal income taxes and replacing them with a FairTax, a broad-based tax on retail purchases that includes a “prebate” for all taxpayers.

A follow up study[7] examined the impact of the FairTax on low-income families. Four model families were chosen. The study showed a tax cut for three of the four low-income families, with the only tax increase amounting to a total of $12.

The GSU FairTax study mentioned above resulted in a revenue neutral (zero revenue shortfall) state sales tax rate of 6.42% (vs 4% today). A similar study by the Beacon Hill Institute places the sales tax rate at 5.4%.

To emphasize, the GSU study of the FairTax showed no negative impact on revenue. As mentioned earlier, other studies have shown that broadening the sales tax base would result in a more predictable and faster growing revenue stream.

Finally, the fiscal impact of the most recent comprehensive tax reform bill in 2011 was projected to range from a loss of $7 million to a gain of $11 million, about as close to revenue neutral as you can get.

So the takeaway is that pro-growth tax reform that lowers the income tax rate can be designed in a way that is fair to all taxpayers, does not put the state’s bond rating in jeopardy, does not result in double digit sales tax rates and does not cause a large reduction in revenue.

The minimum goal of tax reform should be to lower Georgia’s personal income tax rate to equal or lower than North Carolina’s rate. This is a relatively small change that could be very simple to explain.

One long-term problem that could be addressed with tax reform is Georgia’s declining sales tax base, as pictured below. A broader base would capture more services — the part of our economy that is growing more rapidly. 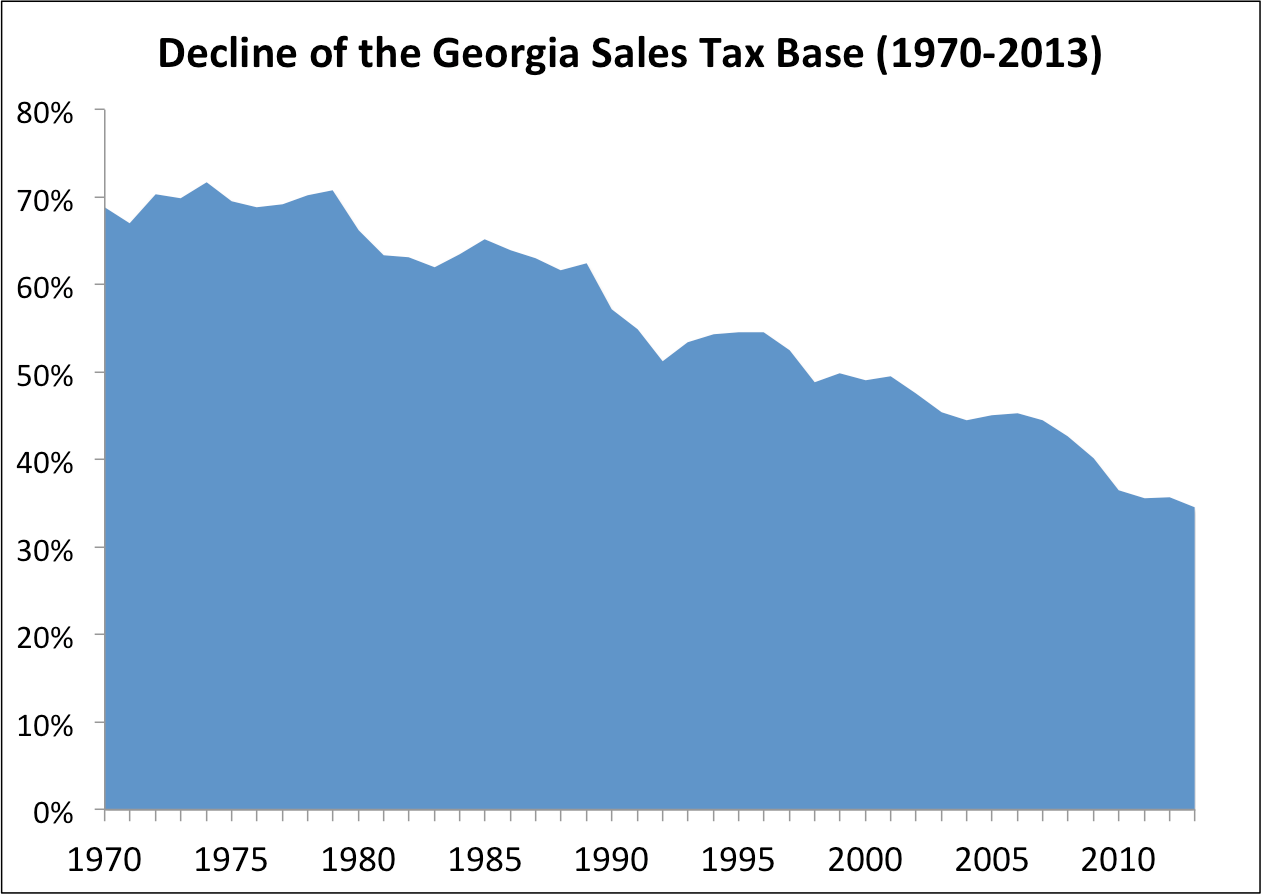