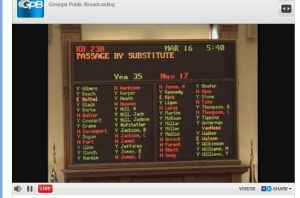 The Senate voted along party lines March 16 on tax reform for Georgia.

The Georgia Senate deserves a hearty congratulations for approving a pro-growth tax reform Wednesday (March 16) that would reduce Georgia’s marginal personal income tax rate for the first time since it was implemented in 1937.

To be the best place to do business in the nation, Georgia needs a more competitive tax code. In the Southeast, only South Carolina’s top income tax rate of 7 percent is higher; nationally, 28 states have lower marginal rates.

One, keep it simple. Instead of a nearly 100-page bill full of multiple tax increases, decreases and technical language, this six-page bill adds just 10 lines to the code and changes four numbers.

The tax code is simplified as well: No more tax tables, no more bracket creep as you earn more money, and your taxes are easy enough to calculate on your phone and fill out on a postcard.

Two, get the numbers right. Instead of a last-minute cobbling together of ideas with uncertain and conflicting fiscal notes, this proposal has been studied and analyzed for two years. Tax reform is hard enough; throw in uncertainty about the economic impact and it is impossible.

The legislation builds off the solid recommendations of the 2010 Special Council on Tax Reform and Fairness for Georgians. National groups have also praised the plan. The Tax Foundation analyzed the proposal and predicts it would significantly improve Georgia’s ranking to 18th overall on the State Business Tax Climate Index, up from the current ranking of 39th.

Most economists would agree it is a “pro-growth” tax reform plan. That means higher sales for small businesses, and higher incomes and more jobs for individuals and families. In North Carolina, which shifted from a 7.75 percent income tax rate to a 5.75 percent flat tax in 2013, median household income grew from 2012 to 2014 by $5,231, or $2,500 more than the national average. As middle-class incomes have stagnated over the last decade, this would be a welcome change for Georgians.

Nevertheless, there are always critics.

The worn-out class warfare card has already been played, despite the fact that under this proposal the average family of four that itemizes would pay no tax on the first $34,000 of income.

Georgia State University’s analysis broke out Georgia taxpayers into 20 different income groups and found this proposal either lowered or had no change on the median and average taxpayer in EVERY income group.

In reality, the income tax is not a tax on the wealthy; it’s a tax on becoming wealthy. The wealthy can hire professional advisors to help them find loopholes and tax shelters. They can purchase non-taxable investments, time their income streams or just spend six months of the year in Florida. It’s the working class that gets stuck paying the bulk of income taxes, which limits their ability to accumulate wealth.

Some claim the tax cuts are too great, even though the cost is less than the annual cost of Georgia’s film tax credits. As opposed to these and other targeted tax credits, this law would apply to everyone instead of just one industry.

Some argue the bond rating agencies won’t be happy. Yet Standard & Poor’s writes that North Carolina’s “favorable” economic climate has “helped spur strong domestic in-migration, which has been good for population and economic growth.” The tax reforms enacted by North Carolina in 2013 and 2015 were far bolder than the Georgia proposal, reducing both their corporate and personal income tax rates dramatically at a projected loss of revenue of $500 million. Even so, North Carolina has retained its AAA bond rating.

Finally, critics conveniently overlook the fact that more than half of all business income is taxed through the individual income tax, not the corporate income tax. This is because more than nine out of 10 businesses are organized as “pass-throughs” – either Partnerships, Sole Proprietorships or S Corporations. Reducing the personal income tax affects more than 800,000 small businesses in Georgia. Much of this revenue is likely to be reinvested in the businesses, increasing jobs and employee pay.

Georgia has the opportunity to take a small, but meaningful step toward tax simplification and great economic growth. Let’s hope that six years of diligent work won’t go down the drain.

© Georgia Public Policy Foundation (March 18, 2016). Permission to reprint in whole or in part is hereby granted, provided the author and his affiliations are cited.