The American Lung Association emphasizes the bad news and mentions the good. Its State of the Air 2018 report (using 2014-2016 data) claims that “ozone pollution worsened significantly.”

The two pollutants most blamed for the “unhealthy” air have decreased. Ozone (4th maximum 8-hour concentration) decreased 27 percent from 2000 to 2017, while tiny particles (PM2.5) dropped by 50 percent.

Respiratory disease causes, changes in the Environmental Protection Agency’s regulations and environmental advocates’ claims have produced an absolute maze of the role of air pollution in respiratory disorders. 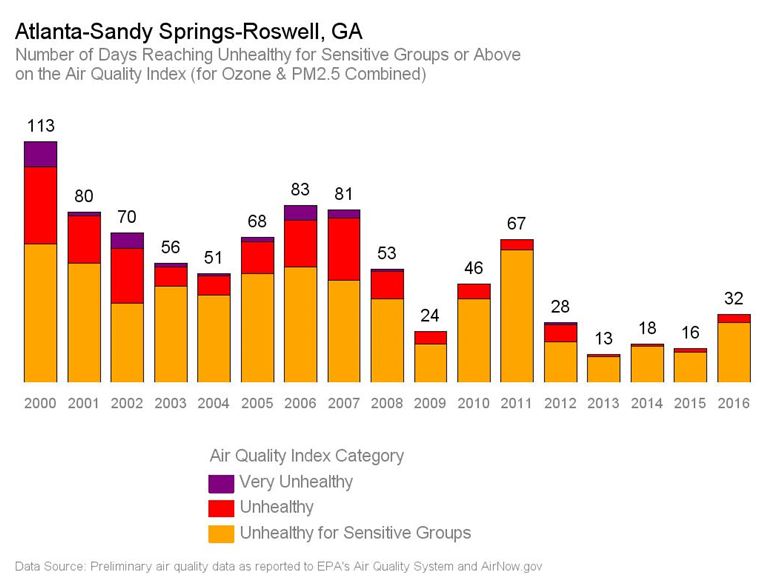 he EPA has, for 40 years, ordered increasingly stringent reductions in the amount of ozone and particles allowable in the air, in large part to reduce asthma, even though there is no evidence it has helped. The prevalence of lifetime asthma among children has hovered around 15 percent for decades.

From 1979 to 1997, the maximum allowable level for ozone was set at 120 parts per billion (ppb), averaged over one hour. During this period, maximum one-hour ozone concentrations for the nation decreased 20 percent. Meanwhile, the rate of doctor visits for asthma increased 25 percent.

In 1997, with the new limit, the population in counties exceeding the standard rose 2.5 times to 101.6 million. A couple of years later the standard for particles in the air also was made more stringent. Since then, the numbers living in “Non-Attainment” areas for ozone and particles varied from about 125 to 175 million without much pattern.

Ozone levels in Atlanta are down 25 percent since 2000. But asthma sufferers’ ER visits are up 18 percent since 1992-1995. If ozone was reduced and serious asthma attacks increased, what will further ozone reductions do?

About the unexpected opposite trends of ozone and asthma, the EPA conveniently hedged its bets in a 2003 publication: “While on the surface, this appears to suggest that air pollution is not related to the incidence or prevalence of asthma, there are too many complexities and uncertainties to draw this conclusion.”

In studies of the connection between ozone and asthma in large populations, which the EPA uses to justify setting tougher standards, it is not just ozone and particles triggering asthma. All of these other, more important triggers confound the connection.

There are still other confounding facts:

Imagine that: a reprieve during the height of the ozone season! The air pollution-asthma riddle has no end of contradictions.

© Georgia Public Policy Foundation (May 11, 2018). Permission to reprint in whole or in part is hereby granted, provided the author and his affiliations are cited.