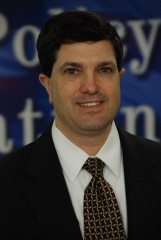 When we wake up on Wednesday after Election Day, there will be less uncertainty in America. But will there be greater confidence? The election will not solve fundamental issues such as transportation, education and health care. In fact, it will create new questions. Successfully addressing these challenges will require strong leadership at the state and national level.

Leadership is not just about ideas and policy. It’s about taking the initiative to bring people together for a common goal. This is important: America appears more politically polarized than ever. Imagine if this nation could function consistently at the level of unity shown after tragic events. There was no Republican versus Democrat in the wake of 9-11. Do you remember the feeling when Ray Charles sang, “America the Beautiful” at the World Series that year? There is no “us versus them” when tornadoes, floods or hurricanes strike our communities.

Think this is too Pollyanna? Consider last year’s sweeping criminal justice reforms. This major legislation passed the Georgia General Assembly unanimously. Other than resolutions praising Miss Georgia or some hometown hero, nothing passes Georgia’s Legislature unanimously. There is indeed hope. Such leadership must be demonstrated at the national level.

Regardless of election results, these United States face a national debt on a sure course to bankrupt and devastate our great nation unless it is addressed. That will mean significant cuts to federal programs – no matter who is elected. It’s time to begin preparing, but it’s also an opportunity to implement new approaches instead of simply replacing federal dollars with state dollars.

One of my favorite professors in college described government as a safety valve that is demanded when our other institutions – families, businesses, philanthropies and churches – fail. This is what is often referred to as “civil society.”

Lawrence Reed, president of the Foundation for Economic Education, has noted that when the French social commentator Alexis de Tocqueville visited a young, bustling America in the 1830s, “he cited the vibrancy of civil society as one of this country’s greatest assets. He was amazed that Americans were constantly forming ‘associations’ to advance the arts, build libraries and hospitals and meet social needs of every kind. If something good needed doing, it rarely occurred to our ancestors to expect politicians and bureaucrats, who were distant in both space and spirit, to do it for them.”

As recently as the early 1900s, mutual aid societies and fraternal organizations provided “virtually every major service of the modern welfare state including orphanages, hospitals, job exchanges, homes for the elderly and scholarship programs,” according to University of Alabama professor David T. Beito.

Just like the response to a natural disaster, these institutions of civil society bring diverse groups of people together. If you have ever volunteered to build a Habitat for Humanity house, gone on a mission with your church or worked on a public service project with your local civic club, you have experienced it.

Steve Jobs encouraged us to “think different.” Our elected officials need to “think different” to engage all of our resources in solving these important challenges. One-size-fits-all, top-down solutions don’t work. And we can’t afford them anyway. It’s time for creative policies that combine personal responsibility, civic engagement and public-private partnerships. It’s time to return to a society of interacting with each other and not depending on government.

This nation requires leadership to resolve its challenges, not just management to shuffle the deck chairs on the Titanic. If Georgians and Americans expect better schools, affordable access to health care and a return to a thriving economy, we must demand more of our elected officials – and expect more from ourselves.

Kelly McCutchen is president of the Georgia Public Policy Foundation, an independent, state-focused think tank that proposes practical, market-oriented approaches to public policy to improve the lives of Georgians. Nothing written here is to be construed as necessarily reflecting the views of the Georgia Public Policy Foundation or as an attempt to aid or hinder the passage of any bill before the U.S. Congress or the Georgia Legislature.

©Georgia Public Policy Foundation (November 2, 2012). Permission to reprint in whole or in part is hereby granted, provided the author and his affiliations are cited.