The main cooling pollutant is sulfur, mostly as sulfur dioxide (SO2), from burning wood and fossil fuels. Sulfur and other pollutants mixed in the air are referred to as aerosols, and they reflect the sun’s rays away from the earth. Water, as vapor and droplets in clouds, is a major component of these aerosols.

The rapid increase in fossil-fuel use near mid-20th century intensified atmospheric aerosols that reflect sunlight. As a result, the earth cooled in many areas, especially the Northern Hemisphere. A 1999 report by scientist James Hansen and co-workers stated that the mean U.S. temperature “fell by about 0.7 degrees C. (1.3 degrees F.) between 1930 and the 1970s.”

Decades of cooling, beginning about 1940-1950, are now attributed to “global dimming,” the reduction of sunlight reaching the earth because of air pollution. Cooling of the United States occurred in spite of an increase of about 10 percent in carbon dioxide concentration from the 1930s to the 1980s. 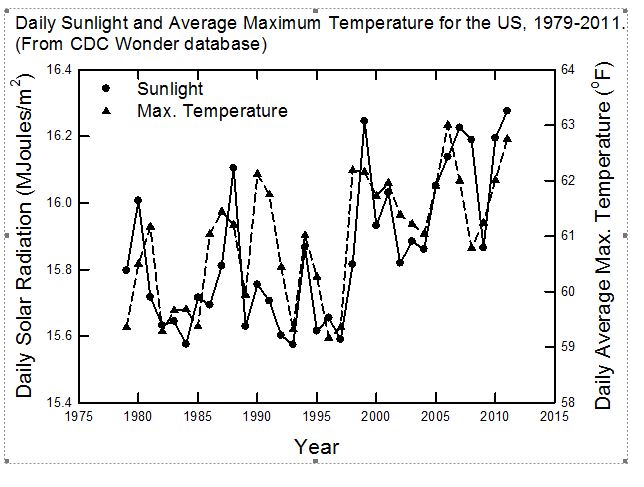 But air pollution has been greatly reduced in developed countries over the past three to four decades. Sulfur dioxide, for example, has decreased 84 percent in the United States since 1980.

This decreased pollution should have increased sunlight reaching Earth’s surface, producing “global brightening”. And it did. Since about 1990, reports of increasing solar radiation at Earth’s surface have come from North America, Europe, Australia, Japan, even Russia (where declining industrial activity may have been responsible).

Increased solar radiation does more than warm the earth. A recent scientific article reported that corn yields have increased by an average of 16 bushels per acre in 10 Midwestern states since 1984 due to solar brightening. This increase is more than the average of total yields for the state of Georgia before 1950.

Said one of the authors, “Without solar brightening, we would need to expand the area needed for corn production from 90 million acres to 135 million acres to produce the yields seen today.”

A good example of global brightening and temperature increase is from the Centers for Disease Control and Prevention website (https://wonder.cdc.gov/), where the correspondence between sunlight and temperature from 1979 to 2011 is striking.

Surely the influence of sunlight on temperature is as important as CO2. But the complications of climatology mean that simple answers, like CO2 causing global warming, are inadequate.

One would expect three times the radiative effect of a doubling of CO2 to have greatly increased the surface temperature. But, according to the report, “oddly, the temperature trend is flat.”

In other words, the “global warming hiatus” since the late 1990s occurred even with the increase in sunlight energy striking the earth and continued increases in CO2.

The report concludes the “solar brightening” is due to a decrease in cloud cover, with “aerosols having only a minor effect.” These are two unexpected conclusions: Increased global brightening is not due primarily to decreased pollution (aerosols), and more sunlight didn’t warm the earth.

Certainly, local decreases in cloud cover are not unusual. But this 16-year study involved seven stations scattered from Pennsylvania to Nevada. The report also explains the lack of an increase of temperature by saying “circulations associated with ENSO (El Niño/Southern Oscillation) events may be responsible for manipulating … the excess surface energy available.”

As climate experiments go, this is a small one. It is well done and well reported. But it illustrates the complications in analyzing and predicting behavior of this “vast machine” called climate.

Increasing carbon dioxide, global brightening, El Niño, less cloudiness. How do you explain climate change – or a lack of temperature change – when the main drivers of change intensify? Of this we can be certain: These and many more climate variables interact to make future climates unpredictable or, at best, predictable with very little accuracy.

© Georgia Public Policy Foundation (May 5, 2017). Permission to reprint in whole or in part is hereby granted, provided the author and his affiliations are cited.