The regional transportation sales tax referendum failed two years ago across most of Georgia and in metro Atlanta. So it’s encouraging to see movement again, in the form of a joint study committee on transportation funding that met in Atlanta August 5 for the first of seven meetings around the state before the 2015 legislative session.

The Georgia Public Policy Foundation has long maintained that transportation policy needs to be about congestion relief and improving mobility: Get freight and travelers from point A to point B as quickly, efficiently and cost-effectively as possible.

It may surprise Georgia’s beleagured commuters to hear that Sullivan, who is also chairman of the American Council of Engineering Companies (ACEC) told the committee, “This is not about transportation infrastructure.”

Golden told the Joint Study Committee on Critical Transportation Funding Infrastructure that, based on present resources, there is a $74 billion funding gap in Georgia’s Statewide Transportation Initiative for 2005-2035. (That’s the “financially unconstrained scenario” of $160 billion “want-to-have” projects, not necessarily “need-to-have” projects.)

“We continue to be one of the states with the highest dependence on the federal program. … We’ve got to break away from that.”

Georgia, once a “donor” state on gas taxes, now gets $1.14 from the federal government for every dollar it sends to Washington. That sounds great until you take into account Washington is spending uncontrollably; there is gridlock over long-term transportation funding; a federal deficit and the tendency of the federal government to tie up projects in bureaucratic strings that raise costs – up to 40 percent, according to Golden.

The committee was reminded that Georgia ranks 49th in the nation per capita on transportation spending.

Being nearly last in spending is not necessarily a bad thing: The Reason Foundation’s 2013 Annual Highway Report, for example, ranked Georgia’s highway system 12th in the nation in overall highway performance and efficiency.

Notwithstanding Georgia’s frugality, the committee’s establishment reinforces the need for the state to explore funding opportunities. The interstates are over a half-century old and, like many-a Baby Boomer, are in need of some sprucing up. Highway needs range from a touchup to a major do-over to keep up with the latest technology. Metro Atlanta’s congestion, the I-75/16 interchange in Macon and the port area’s increased traffic needs are challenges that require dollars. 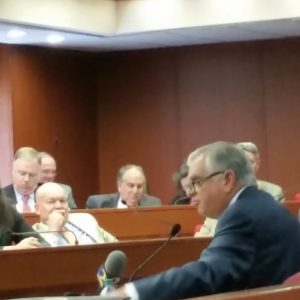 In stark contrast to Golden’s argument that Georgia must get away from federal dependence, LaHood recommended to the committee that Georgia implement a 10 cents increase in the gas tax, index it and look to Washington.

“We need to fix up our infrastructure in America, and we need Washington to do it,” LaHood insisted. “You cannot do what you want to do in this state with your own resources. The idea of giving all the money back to the states, if that had happened, we wouldn’t have an interstate system.”

“We can talk about vehicle miles traveled, tolling, public private partnerships – all good ways to fund transportation – but second only to having a big pot of money, where you set your priorities, you send the money to Washington, the money comes back to help you do what you want to do. … That’s what will keep America growing.”

It won’t. To send a bigger pot to Washington is to squeeze blood out of a stone, thanks to increased fuel efficiency, alternate-fuel vehicles and federal interference eroding funds and hiking costs. Plus, it grows federal government and diminishes Georgia’s ability to prioritize projects. The best government is that which is closest to home.

Georgia’s priority in funding should be more prudent use of existing funds, including dedicating the $180 million from the “fourth penny” of the state sales tax that goes into the general fund annually and enabling counties to implement a fractional penny sales tax on their existing taxes. Work to ensure that the local governments’ sales tax on gas – $518 million in FY2013 – serves local transportation projects; facilitate regional coalitions on projects; increase user fees through tolled lanes, and embrace outsourcing.

What is Washington sending Georgia? Streetcars. Here’s your sign.

Here is the tentative schedule for the remaining transportation funding hearings around the state, according to committee member Edward Lindsey:

Find the Foundation’s transportation proposals for Georgia in Guide to the Issues  2014.