The report drew criticism in a response from Kevin Welner, professor of education at the University of Colorado Boulder. We do not find these criticisms to be valid.

Welner described as “speculation” the 90% switcher rate we used, that is, the percent of scholarship students who would have been enrolled in a public school if the scholarship program did not exist. In fact, we cite findings from 27 different observations across time from six different school choice programs:

Lueken (2020) has surveyed the evidence from six different school choice programs from around the nation that assigned scholarships via lottery. In each of these six scholarship programs, many more families sought to access these scholarships relative to the number of scholarships permitted by law. A variety of researchers studied these six programs and have created 27 different observations (across time) of the percent of families who did not win the lottery – families who applied for a scholarship via lottery, but ultimately did not win a scholarship – who then enrolled their children in a public school. Lueken (2019) created a weighted average of switchers from these 27 observations of the tens of thousands of families who did not win a random scholarship lottery across the six school choice programs over a few years of observation. He reports that in the studies of these six school choice programs, on average, 91 percent of families who were not awarded a scholarship via lottery enrolled their children in public schools (thus, these students would have been truly switchers and attended a private school only if they had received a scholarship). The remaining 9 percent enrolled their children in a private or homeschool setting. The median of these observations was 90 percent. In the interest of caution, we use this lower 90 percent figure in our analysis below and assume that 90 percent of students who applied to the QEE program would have attended a public school in absence of the scholarship program.

Welner also cites a 2001 study of an Arizona program that has zero requirements on scholarship eligibility. Georgia’s program has eligibility requirements (prior attendance in a public school, waived only in limited cases). Thus, the switcher rate in Arizona’s program is not a reasonable guide for Georgia. Further, on pages 15-16 in our report, we provide data on changes in enrollments in public and private schools in Georgia and nationally: 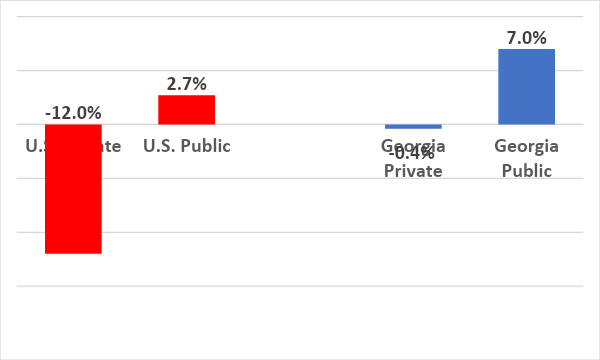 Sources: https://www.census.gov/data/tables/time-series/demo/school-enrollment/cps-historical-timeseries.html https://nces.ed.gov/programs/digest/d18/tables/dt18_203.20.asp?current=yes; and data files provided to the authors by the Georgia Independent School Association.

And, about this additional evidence, we wrote on page 16:

To the extent that Georgia’s QEE Program has aided in keeping private schools from closing – and thereby keeping some non-scholarship students from enrolling in the public education sector – then this tax credit program is providing an additional fiscal benefit to Georgia taxpayers. In this report we do not attempt to quantify this fiscal benefit.

This evidence suggests the program is giving scholarships to switchers and we are underestimating fiscal savings from Georgia’s tax credit scholarship program.

Welner also alleges our estimate of the variable cost of educating students in public schools is “highly inflated.” As shown on pages 40-45 of our report (an appendix that considers the evidence), our estimate is based on actual expenditure reductions by Georgia public school districts that experienced enrollment declines. Three of the four studies on this topic generate almost-identical estimates; the fourth study estimated a marginal cost per public school student significantly higher than ours that, had our analysis used it, would have estimated dramatically higher fiscal savings. Thus, our approach is indeed cautious in this respect.

Welner’s argument that total variable costs of educating state public school students is something like $1,272, and the remaining $11,000-plus spent per student are fixed costs, implies that the state can save tens of millions of dollars per year by barely funding enrollment growth. That is, instead of giving local public school systems over $5,700 per new student in state funds, the state should fund enrollment growth at Welner’s significantly lower amount. As we wrote on page 44 in our report,

If all or virtually all public school expenditures represented fixed costs, then public school systems would not need additional state funds for enrollment growth when they gained students, because all their costs are fixed.

Based on the evidence, we do not believe that almost all public school costs are fixed, and we have never heard public school officials suggest they do not need much state funding for enrollment growth.

Welner sought more data on graduation rates and college attendance rates. We furnish this data below. We did not originally report high school graduation rates for various racial groups because all groups of students participating in GOAL outperform their public school counterparts, as seen below.

As noted on pages 19-20 in our report, some public school students who are not truly low-income are classified as such. That issue is not present in the GOAL data, another reason our analysis is cautious.

Welner is worried about “attrition bias.” Yes, some students change schools during their high school careers. Some move among and between public and private schools and some move out of state. The high school graduation rate for GOAL scholarship students was calculated with the exact methodology for public schools, yielding an apples-to-apples comparison.

We stand by our report’s findings that Georgia’s tax credit scholarship program saves taxpayers a substantial amount of money and that participating students display significantly higher rates of educational attainment, and we encourage readers to access our detailed report.

This full version of the response by Scafidi and Erickson is available here. Read their Atlanta Journal-Constitution op-ed and the Foundation’s news release; read Welner’s response here and the full study here.