Governor Nathan Deal has raised the ante on civil asset forfeiture reform next year by formally asking the new Georgia Council on Criminal Justice Reform to bring forward its own recommendation – and he means before the General Assembly returns in January.

House Bill 1 would have limited the power sheriffs and district attorneys have to seize the assets of people who have been convicted of no crime, convert those assets to cash, and then use the cash essentially however they want to supplement their public budgets.

The legislation was angrily opposed by sheriffs in committee hearings and by district attorneys in more civil dialogue.  HB 1 passed committee but never received a House floor vote as sheriffs packed the Capitol in visible – some might say intimidating — opposition to the bill.   Technically, HB 1 remains alive and could be called to a floor vote or a new bill could be drafted.

“We by no means intend to be running counter to the Speaker’s work group,” said Governor’s Office Deputy Executive Counsel Thomas Worthy.  “Probably it’s more perfect to say we will be running parallel to that.”  Worthy and Court of Appeals Judge Michael Boggs are co-chairs of the Criminal Justice Reform Council, as they were in 2012.  Boggs noted, “There are different schools of thought on that.  There are some politics involved and we’ll just deal with it.” 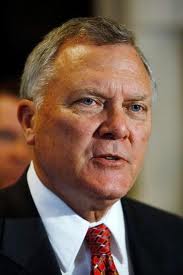 The Criminal Justice Reform Council membership has been significantly rebuilt since last year which reflects its new focus.  Gone are prosecutors and folks with expertise on who should be behind bars and how they should be managed inside.  The Council is smaller – down from 21 to 15 members — all appointed by Governor Deal.  New members were appointed because of their expertise in employment, housing and community-based programs.

Members include executives from Home Depot and Georgia Power, a pastor with experience in community programs and the executive director of a non-profit housing support association.  Several members are from outside the Atlanta metropolitan region.  The Governor’s Office for Children and Families executive director was appointed.  A new Governor’s Office of Transition, Support and Re-Entry was established to coordinate goals and monitor accountability.

The 2011 Council focus on adult reforms emphasized incarceration of violent or repeat serious offenders, and the expansion of accountability courts and treatment for non-violent offenders who would benefit more from mental health or drug counseling than incarceration.

The 2012 Council recommended ending lock-up detention for juvenile status offenders, such as school truants, whose actions would not be crimes if they were adults.  The Council pushed for and the Legislature adopted recommendations to expand community-based programs.

“We’ve addressed what we do when (adults or juveniles) are in the system,” Judge Boggs said.  “We’re trying to address what we do before they get into the system with the juvenile courts.  Think of this as a three-legged stool.  Now what are we going to do when they get out?”