I made the dreaded annual appointment with the dentist yesterday, and the scheduler asked me if I had a preference for a particular hygienist.
“I can’t remember the name of the lady who did it last. Could you check for me?”
“Please hold while I check. … It was ‘Suzie.’”
“Thank you for checking. Anybody but her.” 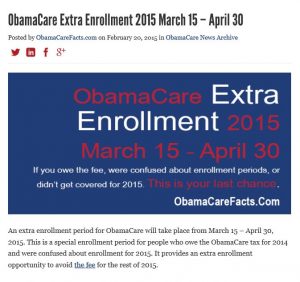 Confused? Make it work for you! Just in case you thought deadlines and suggested guidelines are, you know, different, you get a do-over! A special enrollment period for coverage under the Affordable Care Act will take place from March 15 to  April 30 for people who owe the ObamaCare tax/fee/penalty for 2014, “and were confused about enrollment for 2015,” providing an extra enrollment opportunity to avoid the fee for the rest of 2015. Source: ObamaCarefacts.com

House Republicans have released their latest budget, in which reforms to Medicare and Medicaid and the repeal of ObamaCare play major roles in cutting federal spending by $5.5 trillion over the next 10 years. They propose that future recipients of Medicare are offered voucherlike premium support to pay for private insurance rather than government-provided health care. They also propose reducing government spending on Medicaid over 10 years, with the money turned into block grants to state governments, which in turn would have much more flexibility in deciding how it is allocated. The House Budget Committee projects that will result in $913 billion in savings over the next decade.

Fraud: CBS News reports that fraud in Medicare, which provides health care to 46 million elderly and disabled Americans, cost taxpayers $60 billion of its more than $550 billion budget in 2014. Medicaid fraud control units recovered nearly $1 billion from criminal cases and more than $1.5 billion from civil cases in fiscal year 2013, the latest data available from the Office of the Inspector General at the Department of Health and Human Services.

Nuclear over nothing: It was four years ago that the Fukushima nuclear incident was caused by the earthquake and ensuing tsunami that killed 15,000 in Japan. And the government says it was not the disaster that critics hyped it to be, Will Boisvert writes. Thyroid cancer rates in children in Fukushima prefecture are lower than those found in other parts of the country, the Japanese government found, and much of the evacuation zone is safe for residents to return. “Radioactive contamination works like other mild toxins – alcohol, car exhaust, trans fat – that we live with every day: a huge dose can kill us; a modest dose poses modest risks; a tiny dose is innocuous,” writes Boisvert. Source: Breakthrough Institute

Dealing with dementia: British government officials this week announced a $100 million Dementia Discovery Fund. In hopes of speeding up research in treating and preventing dementia, the project combines the resources of major pharmaceutical companies such as GlaxoSmithKline, Johnson & Johnson, Eli Lilly and Co., Pfizer and Biogen Idec.
About dementia: Dementia, of which Alzheimer’s is the most common form, affects close to 50 million people worldwide and is set to reach 135 million by 2050, according to non-profit campaign group Alzheimer’s Disease International. There is still no treatment that can slow the progression of Alzheimer’s. Source: Reuters

Fast-tracking drugs: The U.S. Food and Drug Administration (FDA) handed out a decade-high number of approvals for novel drugs in 2014, Veronica Farrell-Lecomte of Novella Clinicle reports. She cited the FDA’s new Expedited Pathway programs as the reason; last year, 66 percent of approved drugs earned clearance via one of the four acceleration programs. Drug developers and patients alike have long clamored for faster approvals and increased access to new treatments, especially for drugs targeting rare diseases and other unmet clinical needs.

That’s one dented can: Writing for the National Center for Policy Analysis, Devon Herrick reminds us the Medicare Sustainable Growth Rate (SGR) formula was passed as part of the Balanced Budget Act of 1997 to reduce the growth in Medicare spending. Designed to collectively penalize physicians for exceeding the benchmark expenditures established by Congress, it automatically reduces physician payments under Medicare by a proportion that will lower spending back to the designated growth rate. “However, the SGR has not reduced spending primarily because Congress has continually postponed the cuts year after year rather than reform Medicare in sustainable ways. Since 2003 Congress has postponed the cuts 17 times. Beginning in April, physician fees will be cut by 21.2 percent if Congress does not kick this can down the road an 18th time. Congress has not repealed the SGR mostly because it would cost $140 billion over 10 years and require offsets.”

Similar but not the same: Yes, Virginia, vaccinations, inoculations and immunizations are different. Pediatrician Roy Benaroch explains it in KevinMD.com:

Inoculation initially referred specifically to the historical practice of rubbing the skin of a healthy person with a little bit of crust from a smallpox victim. It was known that this could often induce a mild case of smallpox, which would protect the person from a full-blown, deadly case later. These procedures were fairy widely known especially in England in the 1700s, and remained in widespread use for hundreds of years. The word inoculate comes from the Latin root for ‘eye,” referring to the practice of grafting a bud from one plant to another.

Edward Jenner later started using scabs from cowpox to “inoculate” a milder disease, which was close enough to prevent smallpox, too. It’s thought that his inspiration was the fair, unblemished skin of English milkmaids – they universally caught cowpox as an occupational hazard, so rarely caught the disfiguring smallpox. “Vaccine” comes from the Latin word for cow, either referring to cowpox or perhaps to those fair-skinned milkmaid workers. For a while, the term “vaccination” referred only to using cowpox crusts to prevent smallpox, but later the term became more generalized to include the procedures developed by Louis Pasteur to prevent chicken cholera and anthrax.

Immunization was a later term that broadly referred to both using live infectious particles to induce active immunity, or using non-infectious toxins or other proteins. Typically, now, most of us use the terms vaccine, vaccination, and immunization pretty much interchangeably.

“As more technologically savvy physicians enter the medical field, perhaps our focus should not be on how we can use the [electronic health record] to fit into the traditional model of care but rather how we as physicians can transform our clinical practices to maximize the potential of information we can gain from embracing EHRs as a part of a patient’s presentation.” – Dr. Kerri Vincenti

“[E]ven the absolute best vaccines don’t work all the time. Two doses of MMR gives 99 percent of recipients lifelong immunity from measles, but if you’re at Disneyland along with 40,000 other visitors that day, it means about 400 vaccinated people (1 percent) are not immune. That’s not a slam on the vaccine – it’s just that any medical intervention is imperfect.” – Dr. Roy Benaro