Allergies are nothing to sniff at – especially if you’re starting to have trouble breathing! 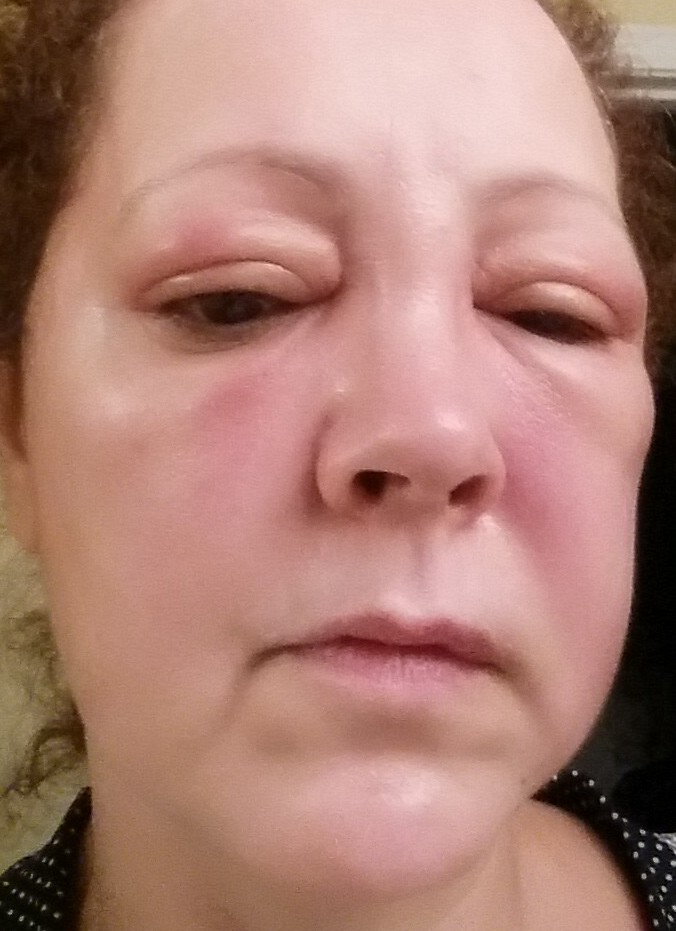 Five hours after I was stung by a wasp, my face was still swelling!

I usually try to show my best side in photographs. But, as my sacrifice to good health, to the right is one of my very swollen face a few hours after I was stung under the eye by a wasp Saturday while gardening. I quickly swallowed a couple of antihistamines and sat down to wait. About 45 minutes later, I was at the Walgreen’s MinuteClinic, my face swelling visibly despite a cold compress over my eye. By the time the nurse practitioner came out to tell me she couldn’t deal with my condition, my breathing was growing just a little shallow. She directed me across the road to the doc-in-a-box, and when I got there I was more than a little alarmed.

I was immediately escorted to an examination room, hooked up to a heart monitor and given shots of Benadryl and epinephrine. They kept me under observation for about an hour to ensure the drugs were working and my breathing improved. Epinephrine helps but it can get your heart racing: By the time I was done and we were picking up my prescription for prednisone my heart rate was 103 beats per minute (usually around 70!). I got home and fell asleep (Benadryl). When I woke up a couple of hours later, my face was so swollen I could barely see.

Fortunately, three days later the swelling is mostly gone. Lesson learned: I’m carrying around an epi pen now. I should have gotten one a long time ago: I don’t get stung often, but I WAS aware that each time I was stung, my allergic reaction increased.

I was impressed, too, that the doc-in-a-box called Monday morning to ask how I was feeling. Quality customer service and quality patient care provide a winning combination that brings repeat business. Although … the doc-in-a-box is part of the same hospital chain that hasn’t bothered to respond to the customer survey I completed about an earlier, dissatisfactory visit to another of its facilities. So it’s not totally off the hook.

About insect stings: Did you know? About 2 million people in the United States are allergic to bee stings and about 100 Americans a year die of that allergy, usually after going into anaphylactic shock. The Mayo Clinic explains that people who have gone into anaphylactic shock after one sting are 30-60 percent more likely to show the same reaction in the future. A bee will die after stinging you; wasps, on the other hand, don’t lose their sting and can sting you multiple times without dying.

Where were you born? If you’re older than 75, odds are you were born at home. That’s because, until about 75 years ago or so, most babies were born at home. Now it’s around 1 percent in the United States, although much higher in many Western European countries. The shift to hospital births paralleled the growth of hospitals, pediatrics and obstetrics, writes Dr. Christopher Johnson, a pediatric intensive care physician. With that shift, women’s autonomy over their health care decisions has declined, too. “There has also been an unsurprising jump in the proportion of Caesarian section deliveries, an operative procedure, and various other medical interventions in labor and delivery.” So which is safer? He concludes: “A key finding to me is that the outcomes for babies delivered at home by certified nurse-midwives were no different than for those born in the hospital. So proper training matters – a lot. One key thing a trained midwife should offer is the knowledge of which pregnancies are higher risk and unsafe to deliver outside a hospital.” Whether home or hospital, the bottom line is a physician needs to perform a routine examination of your newborn, he says. (I was born at home, with a midwife in attendance.)

So … It’s not their fault they won’t wake up? High schools and middle schools should start at 8:30 a.m. or later to better sync schedules with students’ natural sleep cycles, the American Academy of Pediatrics says in a new policy statement. At the start of puberty, sleep-wake cycles shift two hours later, making it difficult for students to wake up as early as they did when they were younger, the Academy says. “Studies show that adolescents who don’t get enough sleep often suffer physical and mental health problems, an increased risk of automobile accidents, and a decline in academic performance,” the statement says. “But getting enough sleep each night can be hard for teens whose natural sleep cycles make it difficult for them to fall asleep before 11 p.m. — and who face a first-period class at 7:30 a.m. or earlier the next day.” The problem, of course, is the cost. Systems divvy up the school day to divvy up the school buses, for example. Montgomery County, Md., school district decided this year against a new bell schedule that would have moved high school start times 50 minutes later, citing “implementation costs of more than $20 million and mixed feedback from the community.” – Source: Education Week

Heavily invested in a weighty issue: The University of Nebraska-Lincoln has received an $11.3 million grant from the National Institutes of Health to establish a research center focused on obesity, GenomeWeb reports. Perhaps the center should focus on eyeglasses: A study reported Aug. 25 in the journal Pediatrics found that “parents have become less able to realize when their child is overweight or obese.” It found that parents interviewed between 2005 and 2010 were 24 percent less likely to spot a weight problem in their child than parents interviewed between 1988 and 1994, the researchers said. According to senior study author Dr. Jian Zhang, an associate professor of epidemiology at Georgia Southern University in Statesboro, “Parents incorrectly believe their kids are healthy, they are less likely to take action, and so it increases the likelihood that their kids will become even less healthy.”

It’s not that difficult: In the Internet era of self-diagnosis, every virus is Ebola, every sniffle pneumonia and every cut infected by flesh-eating bacteria. But even physicians sometimes get carried away. Writing in KevinMD.com, Dr. Maria Yang reminds us that not every case is one for television’s “House” and his team. She shares the, “Four adages I learned in medical training that I still speak of today:”

“While providing patients with information is important, this isn’t what motivates people to make lasting changes and adhere to them. Rather, it’s a sense of community. There’s an innate human understanding that anything that can connect us is really healing. Indeed, if you look at the inverse, studies show that people who report feeling lonely or isolated are ten times more likely to die prematurely.” – Dr. Dean Ornish, “How to Move the Needle on Wellness”