My opportunity to participate as a team volunteer in a Remote Area Medical mission was lost last week when the mission, scheduled August 13-17, had to be canceled at the last minute because – as I posted on my Facebook page – there was unrest in the region.

That’s right. The program organizers were apparently unable to guarantee the safety of volunteers on the trip to East St. Louis, about 10 miles from Ferguson, Mo., where protesters were marking the anniversary of Michael Brown’s death.

It’s a tragedy that hundreds of low-income residents missed the opportunity for free, basic medical care brought right to their doorstep, all because a few chose to mark an anniversary with violent protests. So much for #blacklivesmatter: East St. Louis is 98 percent black.

I hope I’ll have another chance to participate soon.

Healthy, wealthy and wise: Employers have powerful incentives to improve individual health: It lowers health care costs and improves workforce morale and productivity. The “wearable” fitness devices, along with the apps, encourage a workplace team approach to wellness and a little friendly competition in achieving health and fitness goals. Read the article by Rod Reasen, CEO of Healthiest Employees, “Wearables and Employers: A Match Made in Heaven?” written for the Institute for HealthCare Consumerism. He shares the Employer Guide to Wearables, a review of more than 20 devices, and outlines an employer checklist for device purchases. TechRadar, meanwhile, just released its review of 10 Best Fitness Trackers 2015, ranging from the $8.79 Jawbone Up24 to the $250 Fitbit Surge. 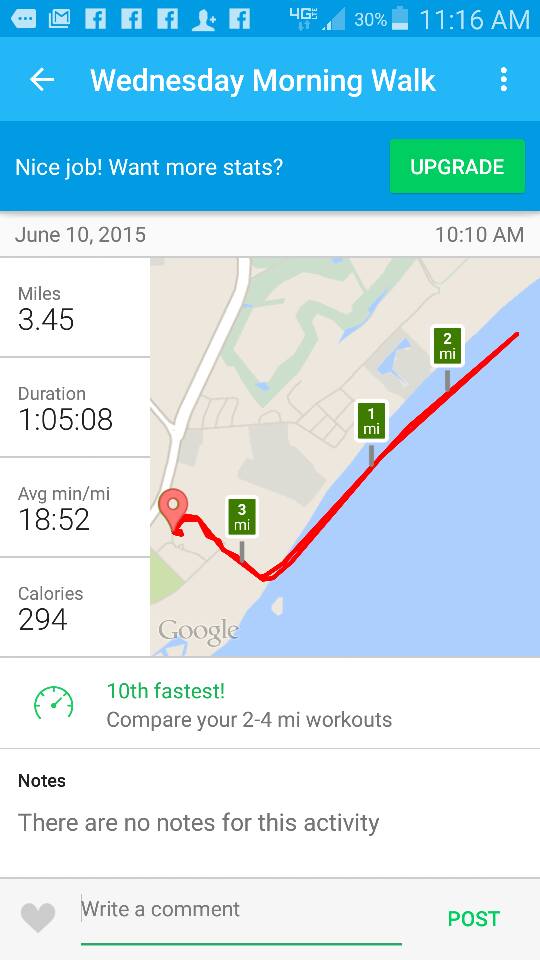 Runkeeper does a lot, but it won’t keep up with the tides, as this screenshot shows from my recent walk on the beach at Hilton Head Island, S.C.

There’s an app for fitness: Fitness apps can help you achieve personal goals, whether it’s to train for a road race, lose weight, build muscle or control calories. In June, PC magazine shared its list of The 25 Best Fitness Apps. One interesting app is Charity Miles, which is free and earns money for charities every time you run, walk or bicycle. You choose from its list of charities. You can also choose by your exercise-preference, like Cyclemeter (which also tracks walks and runs); Jefit Workout ($4.99 for the pro version) to track your sets and reps at the gym; and my new favorite, The Johnson and Johnson Official 7 Minute Workout! PC Magazine rated MyFitnessPal an excellent choice. Spotify ($9.99 per month) provides playlists and special features designed for workout, like a running feature that detects your tempo and plays songs whose beat matches it.) And Zombies, Run! ($3.99, free on iTunes) is an exciting audio adventure in which you run missions – and escape zombies – along the way.

I have a Fitbit and I use the Runkeeper app on my Galaxy S5 when I exercise (walking). This morning, however, I tried the 7 Minute Workout, (nine minutes with warmup!) and I’m quite impressed. A far cry from the treadmill, thanks to the new apps. The journey of 10,000 steps a day has never been this much fun!

Cadillacs and health care: The Affordable Care Act came with a tax intended to discourage employers from offering their workers more expensive health insurance by … making it unaffordable. The premise was that it would encourage plans with fewer benefits, because employers would “shift a greater cost of health care expenses onto employees, causing them to be more judicious about asking doctors whether appointments or tests are necessary and ultimately reducing strain on the health care system,” according to U.S. News and World Report. When the tax takes effect in 2018, employers who offer plans costing $10,200 for an individual and $27,500 for a family will have to pay a 40 percent excise tax on the amount above that limit. According to consulting firm Mercer, a third of employers will face the tax in 2018, almost 60 percent will face it by 2022. The tax affects not just the cost of premiums, but also of health savings accounts and flexible spending accounts. With 60 percent of Americans receiving health care through an employers, this is already affecting many employees as companies shift to higher deductibles and out-of-pocket costs. Numerous bipartisan efforts are under way to fight the tax, in the states and in Congress; even the unions are fighting this aspect of ObamaCare.

No money? No problem: Twenty-two of the 23 federal insurance cooperatives created under the Affordable Care Act are losing money and could have difficulty repaying millions of dollars in federal loans, an internal government audit has found, Most of the insurance co-ops enrolled fewer people than they had predicted, according to the inspector general at the Department of Health and Human Services. Even as overall enrollments for insurance have increased, many of the co-ops are still losing money, a review of 2015 data by federal health officials shows. The Kentucky plan lost $50 million last year, more than any other insurance co-op, as it paid out $1.25 in claims for every dollar it collected in premiums. “We attracted many consumers with serious illnesses,” a Kentucky spokeswoman said. “One of our most popular plans had low premiums, low out-of-pocket costs and a large network of providers.” Overall, co-ops have received $2.4 billion in federal loans to help pay start-up costs and to meet state solvency requirements.

What you don’t know: An anonymous essay published in the Annals of Internal Medicine on Monday reveals unsettling behavior among physicians, according to U.S. News & World Report. The author details physicians behaving unprofessionally, including a disturbing incident a medical student shared with him, describing how an attending physician made lewd comments as he prepared a woman for a hysterectomy. In an accompanying editorial, editors wrote, “It is our hope that the essay will gnaw on the consciences of readers who may recall an instance of their own repugnant behavior. … After finishing it, readers guilty of previous offense will hopefully think twice before acting in a manner that demeans patients and makes trainees and colleagues squirm.” Source: Becker’s Hospital Review

DPC vs. concierge medicine: Direct primary care and concierge practices tend to be lumped together under the umbrella of “membership” medicine, writes Dr. Rob Lamberts. But they are different. Find out more in the article he wrote in KevinMD.com.

Licensing costs: At the Georgia Public Policy Foundation, we often discuss how onerous professional licensing requirements hurt the people who need jobs most. Physicians face a challenge with the American Board of Internal Medicine’s (ABIM’s) maintenance of certification (MOC) program, which was “significantly expanded” in 2014. Now, doctors must get 100 MOC points every five years, do at least one MOC activity every two years. The program fees were raised and failure rates for recertification increased, according to a new study from the Annals of Internal Medicine. “The team of researchers from UCSF concluded that the MOC program will cost doctors $5.7 billion over 10 years and most of that amount comes from the 33 million hours that they estimate doctors will spend on MOC activities,” writes Dr. Tara F. Bishop in KevinMD.com.

“Of course, vaccine skeptics counter that measles is rarely fatal. If a parent decides not to vaccinate their kids, they’re not putting anyone at serious risk. Right? Wrong. Try telling that to the family of a Washington woman who died from measles this spring, the first such death in the United States in a dozen years. She was in a hospital receiving treatment for other conditions, and was on immunosuppressant drugs. She was exposed to measles when another patient infected with the disease came into the hospital.” – Christopher Ingraham

“If patients want to benefit from much better care, if they want a doctor that is not frustrated and can spend time with them listening, if they want their total costs of health care to decline rather than rise, then they will need to educate themselves and then advocate – to legislators, to insurers, to employers and to their doctors. Concerted patient action will force the issue and make change occur.” – Dr. Stephen C. Schimpff