Senate Finance Committee Chairman Judson Hill recently introduced two tax reform bills. The first proposal would replace Georgia’s six tax brackets with one tax bracket of 5.4 percent (a reduction of 10 percent from the current top rate of 6 percent), increase personal and dependent exemptions by $2,000 each, and eliminate itemized deductions other than charitable deductions, medical expenses and up to $25,000 of mortgage interest. In addition, the corporate net worth tax is eliminated. [Update: Analysis of this bill by the Tax Foundation indicates it would improves Georgia’s ranking to 18th overall on the State Business Tax Climate Index, up from the current ranking of 39th.]

The second bill, a proposed constitutional amendment, would reduce the personal income tax rate to 5.2 percent and then to 5.0 percent contingent on state revenues and the Rainy Day Fund meeting specific targets.

How does Georgia’s top marginal personal income tax rate compare to other states? In the Southeast, only South Carolina’s top rate of 7 percent is higher than Georgia. Nationally, 28 states have lower marginal rates.

Although similar to the recommendations of the 2010 Special Council on Tax Reform and Fairness for Georgians and the tax reforms implemented in North Carolina, these proposals are more limited in scope.

The IRS publishes personal income tax data for each state here. Based on that information, it is possible to calculate the average mortgage interest deduction and average charitable gift deduction for Georgia taxpayers by income. A breakout of medical expense deductions is not available at the state level, so these must be estimated using federal data. The average mortgage interest deduction for the highest income category (adjusted gross income of $1 million or more) is below the proposed cap of $25,000.

So under this proposal, an average family of four that itemizes would pay no tax on the first $34,000 of income. (Median household income in Georgia is around $49,000. The total deductions and exemptions from the third and fourth columns in the tables above under this proposal are $34.121 and $34,559, respectively.)

The chart below shows the immediate effect on all taxpayers by income group. The vertical axis represents the change in taxes paid and the horizontal axis represents average income in thousands of dollars. The average change in taxes is either zero change or a tax cut for every income category, even before the rate drops to 5.2% or 5.0%. It’s important to note that nationally more than half of all business income is taxed through the individual income tax, not the corporate income tax. This is because most businesses, 94 percent in 2011, are organized as “pass-throughs” – either Partnerships, Sole Proprietorships or S Corporations. So reducing the personal income tax impacts more than 800,000 small businesses in Georgia. 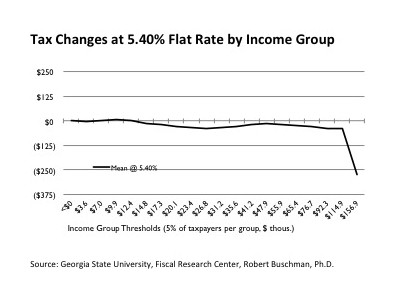 Two tax reform proposals to lower Georgia’s income tax rate were introduced last year and could be approved this year.

House Bill 435, sponsored by Reps. B.J. Pak and Brett Harrell, would broaden the personal income tax base by limiting itemized deductions and reduce the tax rate from 6 percent to 5.25 percent. Itemized deductions would be limited to charitable contributions (with no limit) and mortgage interest of up to $20,000.

House Bill 445, sponsored by Rep. John Carson, would reduce the personal and corporate income tax rates from 6 percent to 4 percent over time. The bill has several components:

There is a concern that tax reform can harm bond ratings. Obviously, a dramatic reduction in tax revenues would impair a state’s ability to pay back debt, but sound tax reform can actually strengthen the fundamentals that determine a state’s bond rating. Broadening the sales tax base, for example, can enhance growth and lower volatility. Reducing reliance on income taxes can also be a positive. One rating agency, Standard & Poor’s, stated Washington State’s “sales tax-based revenue structure that exhibits sensitivity to economic cycles, but to a lesser degree than those of states that rely primarily on personal and corporate income taxes.” (Washington State does not have an income tax.) Finally, bond rating agencies prefer states to have the flexibility to raise taxes if necessary. Due to a constitutional amendment passed in 2014, Georgia’s personal income tax rate is capped at 6 percent. Therefore, reducing the income tax rate below 6 percent would return that flexibility.

Below is the latest summary of bond ratings from Standard & Poor’s. Notice that North Carolina retained the highest bond rating even after a dramatic round of tax reforms in 2013. 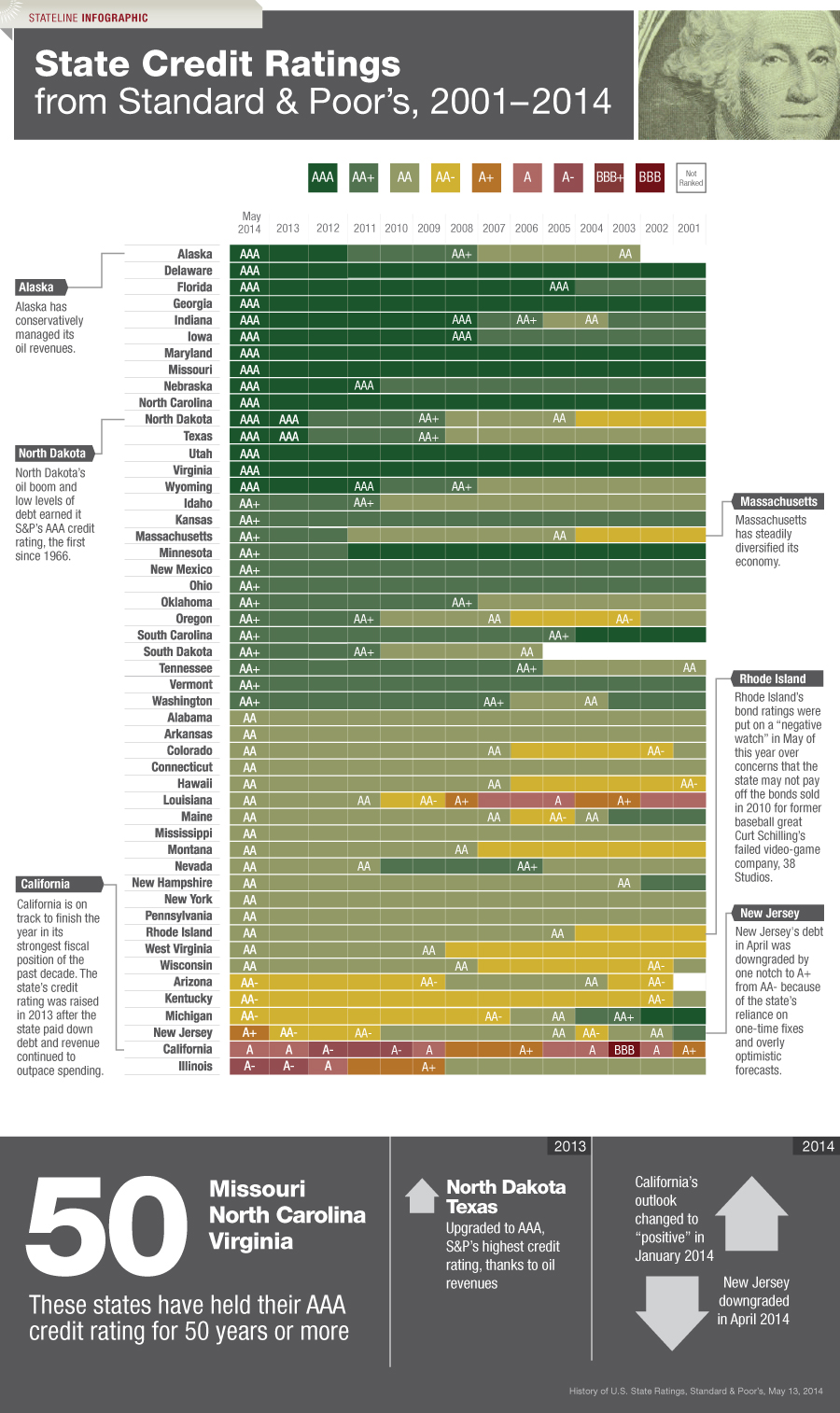