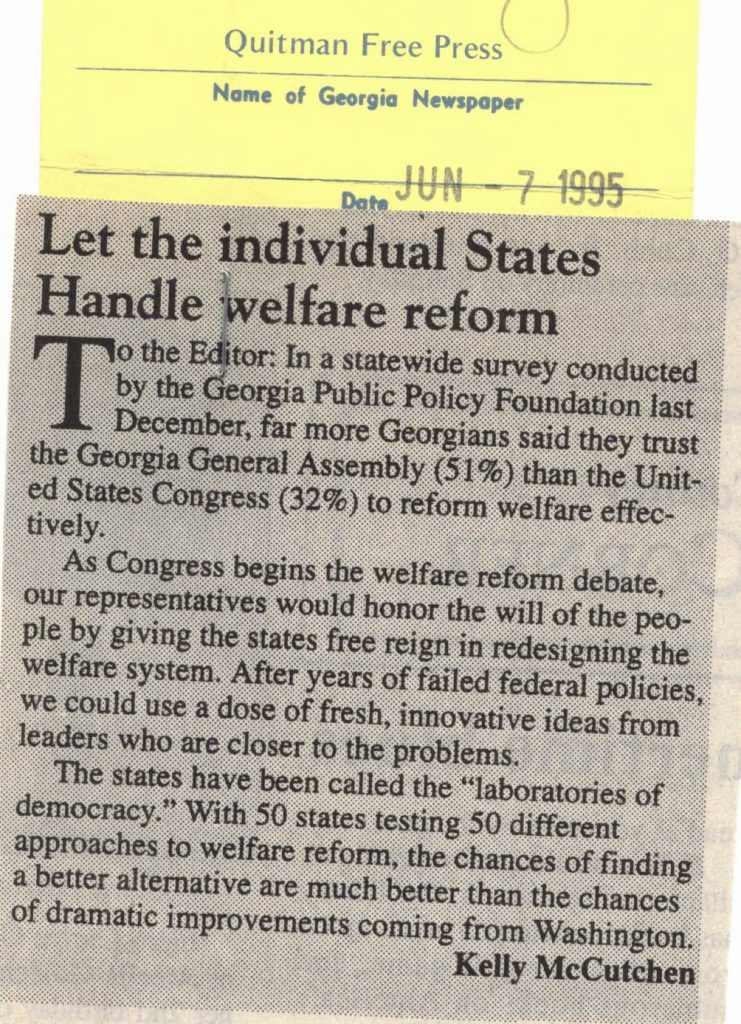 Federalism, a state of independence: The Georgia Public Policy Foundation has a history of defending the ability of Georgia to solve its own problems instead of being handed top-down, one-size-fits-all mandates from the federal government. In 2021, as the Foundation celebrates 30 years of “Changing Georgia Policy, Changing Georgians’ Lives,” this 1995 Letter to the Editor of the Quitman Free Press shows the challenge is far from over.

“In March, Energy Secretary Jennifer Granholm announced $30 million in grants for research to ‘ensure American businesses can reliably tap into a domestic supply of critical elements and minerals, such as lithium, cobalt and nickel, needed to produce clean energy technologies.’ But if mining projects get blocked by environmental regulations, no amount of government support will matter.” – Shawn Regan

Get ready for redistricting: By law, states must redraw their congressional and legislative district boundaries every 10 years following the U.S. Census. The state House and Senate committees in charge of redistricting will hold a joint virtual town hall meeting next week to start gathering feedback from Georgia residents. The June 15 meeting, which will run from 5-7 p.m., will be the first chance for citizens to weigh in on the results they would like to see from the process. The committees are expected to hold additional hearings during the next few months across the state.

Pandemic positives! The popular restaurant-grocer hybrid is here to stay and signals a more permanent shift toward restaurant-quality take-home items.

Who lives in a tax shelter under the sea? A study by the the Centre for Research on Multinational Corporations found that ViacomCBS (owners of the popular Transformers and Spongebob Squarepants franchises) used tax shelters to avoid paying roughly “$3.96 billion worth of US corporate incoming tax since 2002.”

Can’t find lumber? The National Association of Home Builders (NAHB) estimates that “the surge in lumber prices has added nearly $36,000 to the average price of building a new single-family home.” They are unsure when the price will return to normal levels, but don’t expect it to be this year.

Yikes: According to GoBankingRates, this metro Atlanta city will be completely unaffordable by 2026.

Back to school. Really. Atlanta Public Schools are planning on in-classroom instruction for the 2021-2022 school year.

Bitcoin blunder: Federal authorities were able to seize the majority of the payment Colonial Pipeline sent to hackers following last month’s shutdown. The FBI was able to reclaim the payment after discovering the bitcoin wallet that the hacking group owned.

Be with you in a minute! CVS Health announced Monday it has finished installing time-delay safes at all 355 of its Georgia pharmacy locations, including those in Target stores. The safes, now in use in 18 states and the District of Columbia, have driven significant declines in robberies at CVS pharmacies. The time-delay function, which cannot be overridden, electronically delays the time it takes for pharmacy employees to open a safe, deterring would-be robbers trying to get in and out of stores as quickly as possible.

Remote care: Atlanta-based Wellstar Health System took advantage of its remote patient monitoring program during the pandemic. The system began its telehealth program in 2015, with a telestroke platform that expanded to remote patient monitoring for congestive heart failure. Readmissions were reduced by shrinking the window in which patients and providers connect after discharge. A Wellstar program that sent pulse oximeters to COVID-19 patients and monitored them for two to three weeks resulted in no readmissions.

This month in the archives: In June 20 years ago, the Foundation published, “American Dream Boundaries: Urban Containment and Its Consequences.” It noted, “After decades of efforts to improve the economic status of lower income citizens, especially minorities, smart growth’s unintended but inevitable promise appears to be to nullify some or all of the progress. And of course, it is not just people who are denied economic advancement who are injured, it is entire communities, in which economic growth is less than it would otherwise be.”

Visit georgiapolicy.org to read the Foundation’s latest commentary, “How Georgia is ‘Amazon-izing’ Healthcare and Fixing What’s Wrong with the Affordable Care Act” by Randy Pate