Earlier this month, on June 14, Dutch company Philips announced a U.S. recall of CPAP machines. Millions of them.

It’s interesting how few people know what a CPAP machine is, and how many people actually use them. Until you know someone who uses one. Then, suddenly, you notice them everywhere. Stand in an airport and you’ll watch scores of people carrying this essential little case onto their flight, most of them men. This is considered a medical device and allowed as an extra carry-on bag.

So what is a CPAP device? CPAP stands for Continuous Positive Airway Pressure. Essentially, the machine keeps people with sleep disorders breathing by forcing air into their passageway while they sleep.

Up to 70 million U.S. adults have a sleep disorder, and the most frequent is obstructive sleep apnea. That’s when someone’s upper airway collapses while they’re sleeping and they stop breathing, numerous times a night. You may not realize it until your sleep partner or house mate alerts you to it, in a conversation that usually goes like this:

What? I was sleeping!

You stopped snoring. I came to check on you because I thought you’d died.

More men than women have the disorder. And if you just stopped breathing without consequences, that’s one thing.

The problem is it interferes with your sleep, resulting in tiredness and sleepiness during your waking hours. This could prove dangerous if you’re a truck driver, for instance, and you doze off while driving, or even lose focus for a moment.

But wait. There’s more! Obstructive sleep apnea has also been identified as causing hypertension, cardiovascular disease and stroke, among other scary ailments.

If you live alone, all you may notice is that you’re tired all the time. But your housemates, roommates or relatives may notice your loud snoring and sudden silence – when your airway collapses and you stop breathing. Then a huge start as you start breathing again and gasp to catch up. 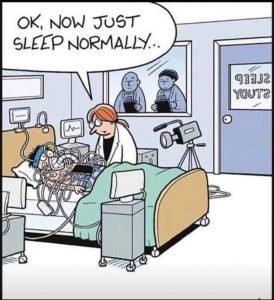 People are generally diagnosed after participating in a sleep lab, where you’re hooked up to all kinds of sensors and that count how many times you stopped breathing.

The risk increases with age, obesity, menopause, family history and, of course, for men.

Considering how many people have it, why is it such a silent epidemic?

First, it’s a nocturnal syndrome for the most part, and generally you’re with just one other person at night. Second, a CPAP machine is not a very attractive device; for most who wear it, it looks like they’re going snorkeling and they’re not likely to admit using it unless the time comes that someone is actually in the room with them. And if they’re embarrassed, they may not take it with them on vacation, business trips or when they visit family for the holidays – a high-stress period. Is that perhaps the combination of reasons heart attack deaths are more prevalent during the holidays?

Philips even even acknowledges the embarrassment in its sales material:

The DreamStation travel case gives patients a convenient, compact, and discreet way to travel with their DreamStation sleep therapy system and supplies.

In other words, while millions wonder what a CPAP device is, millions more are worrying how the recall will affect them.

The risk is in the polyester-based polyurethane (PE-PUR) sound abatement foam component, which could break down and be inhaled by device users and emit chemicals. This deterioration is exacerbated by unapproved cleaning methods – like using ozone – as well as high heat and high humidity.

According to Philips, the risks could include headache, irritation, inflammation, respiratory issues, and possible toxic and carcinogenic effects.

But this may just serve as a wake-up call, so to speak, for many people or those near them, to pay attention to why they’re exhausted during the day, and why they seem to stop breathing at night.

For a list of affected devices, check here. Don’t stop using yours, however, before consulting with your provider or physician.

Checking Up On Health is compiled by Benita Dodd, vice president of the Georgia Public Policy Foundation.