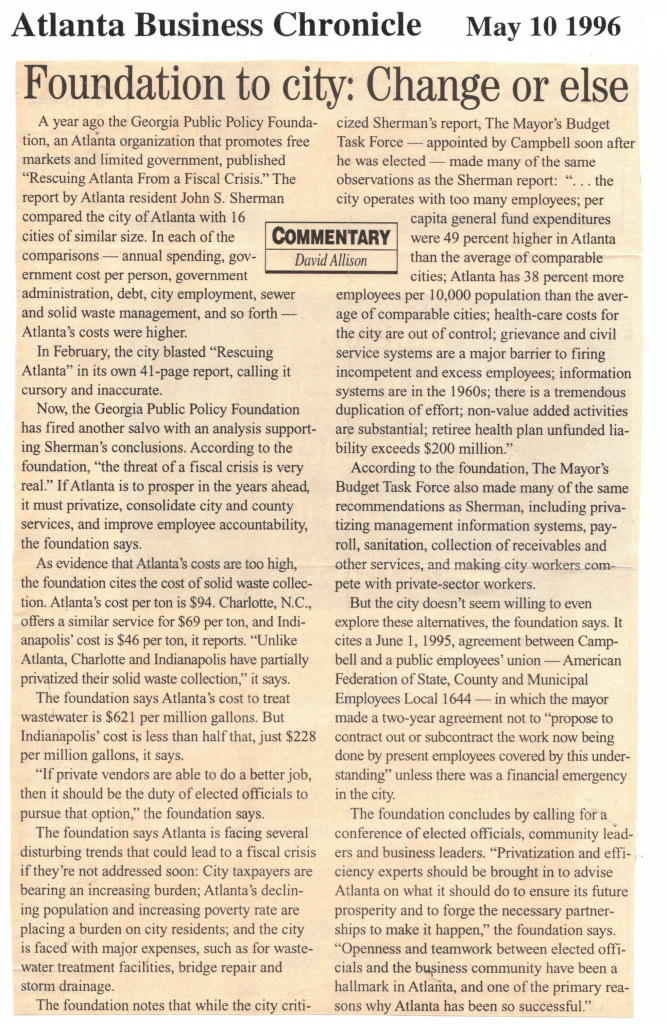 Outsource resource: As far back as 1996, the Georgia Public Policy Foundation maintained that for the city of Atlanta to prosper, “it must privatize, consolidate city and county services, and improve employee accountability.” The Foundation, which celebrates its 30th anniversary this year, continues to champion managed competition and outsourcing of services to improve efficiency of government services and give taxpayers bang for their buck.

CON Game: Read the fourth article in the Foundation’s Investigative Journalism Initiative, in which Matt Bolch examines what Certificate of Need regulations mean to healthcare in Georgia .

“When did America agree to be lectured at by comedians?” – Douglas Murray

“Of 56 categories in the last seven Gallup Polls, national security is ranked by less than half a percent of respondents as the most important problem facing the U.S., and yet its effect on whether we stand or fall is equal to that of all other problems combined. Even should we descend into nightmarish shambles as in the Civil War, with the defense of our sovereignty and independence, just as then, we can survive. Without it, we cannot.” – Mark Helprin

“Since the government conducted the first Census in 1800, the representation in Congress has been apportioned every decade according to its outcome. With rare exceptions, states have apportioned representation through geographic districts dividing up the states, making control of those districts’ geographies a way to sneak in a partisan advantage in congressional and state legislative elections.” – Michael Watson

Pipe down: The cyberattack this month on the Colonial Pipeline caused a major disruption to the nation’s energy supply. But a report by the White House Environmental Justice Advisory Council is recommending against “procurement, development or infrastructure repair that would in any way extend the lifespan or production capacity” of a fossil fuel project. Source: Energy and Environment Legal Institute

Telecommute tax: The Biden administration has urged the U.S. Supreme Court to turn away a New Hampshire lawsuit that challenges Massachusetts’ taxing of nonresidents who once worked in the state but now do their jobs from home. Should the justices let the case go forward, it could determine the fate of similar, permanent tax laws in New York and five other states. New Hampshire does not impose an income tax and argues its neighbor’s actions are unconstitutional. Source: Accounting Today

Cheers! The U.S. beer industry supports more than 53,869 “good paying” jobs in Georgia and contributes more than $8.6 billion to the state’s economy, according to a report on the industry’s economic importance. Brewers and beer distributors directly employ nearly 210,000 Americans, and “every brewing job supports another 31 jobs” in other industries, including farming, transportation and hospitality. The beer industry represents 1.6% of the U.S. GDP. Source: Metro Atlanta CEO

Found money: According to recent studies, there were about 70,000 unclaimed retirement accounts across the United States in 2016, totaling $38 million. Investment manager TIAA says an estimated 30% of U.S. workers have left a retirement account at a previous employer. The Government Accountability Office (GAO) estimated that between 2004 and 2013, around $8.5 billion was sitting in smaller lost retirement plans. Source: Don’t Mess with Taxes

Your tax burden: The U.S. government collects more than $5.3 trillion in taxes each year. What does the average American pay? A total of $525,037 in taxes throughout his or her lifetime, with $339,173 of it coming from a tax on earnings. Georgians’ burden is comparatively low at $380,875 in taxes, with $239,628.60 of that on earnings. Residents of New Jersey will pay the most in lifetime taxes, $931,000. Read more at Self, a financial technology company.

Forensics: The Georgia House Public Safety and Homeland Security Committee kicked off an examination into metro Atlanta’s soaring crime rates and potential solutions. Murders in the city of Atlanta are up 50% so far this year over the same period in 2020, while rapes have increased by 82%. Gov. Brian Kemp this week committed up to $5 million of the Governor’s Emergency Fund to support state efforts to bring crime in Atlanta under control. Source: Capitol Beat News Service

Reality checks: Six metro Atlanta cities will get significantly less in pandemic funding than they hoped from the federal government, according to The Atlanta Journal-Constitution. The differences are due to conflicting formulas in U.S. House estimates and U.S. Treasury Department allocations. Alpharetta expected $21 million but will get $6.6 million; Johns Creek went from $26.6 million to $7.1 million. Brookhaven’s funding was down 52% to $8.4 million; Smyrna will receive $8 million, 55% less than estimated. Stonecrest, accused of mismanaging previous funding, will get $9.7 million, 44% less than expected. The newspaper did not list the cities’ needs compared to their expectations.

New nonprofit: Former U.S. Sen. Johnny Isakson launched a nonprofit organization this week that will raise awareness and funding for neurocognitive diseases including Parkinson’s, Alzheimer’s and related dementia. Isakson announced his diagnosis with Parkinson’s in 2015 and retired from Congress at the end of 2019, midway through his third term representing Georgia in the Senate. Source: Capitol Beat News Service

COVID-19 update: Gov. Brian Kemp issued an executive order this week that prohibits the use of “vaccine passports” for entry into Georgia and said he would ban public schools from mandating that students, staffers and teachers wear masks. The Georgia Department of Public Health reports COVID-19 cases, deaths and vaccination rates on its website here. As of Wednesday, 289.2 million vaccine doses had been administered and about 131.9 million Americans are now fully vaccinated.

This month in the archives: In May 15 years ago, the Foundation published, “Congress Overdue for a Fiscal Spring Cleaning.” It noted, “This nation needs earmark reform, allowing members of the House to offer amendments to eliminate outrageous pork projects from spending bills. There is a need for a rainy-day fund that Congress could tap to pay for future emergencies such as hurricanes, fires or floods. The president needs line-item veto authority, and taxpayers deserve a commission to weed out wasteful, inefficient and outdated programs.”

Visit georgiapolicy.org to read the Foundation’s latest commentary, “A Day of Honor, a Sacrifice of a Lifetime,” by Benita Dodd.

Have a great weekend. Please stop a moment this Memorial Day to appreciate the sacrifice of those who paid the ultimate sacrifice for our nation.