Civil Discourse: For years, the Georgia Public Policy Foundation sponsored debates among Georgia’s political candidates, and – as this 1994 article on tax reform demonstrates – encouraged voters to seek out sound policy platforms. Founded in 1991, the Foundation celebrates its 30th anniversary this year! 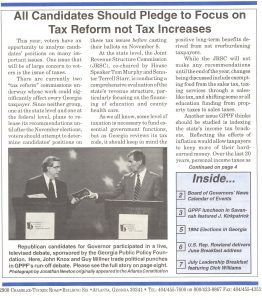 “America has a record 8.1 million job openings. The media call it a ‘labor shortage.’ But it’s not a labor shortage; it’s an incentive shortage.” – John Stossel

“Will people want more telehealth in the future? We can look at information technology (IT) trends for hints. Apple CEO Tim Cook said, ‘Our whole role in life is to give you something you didn’t know you wanted. And then once you get it, you can’t imagine your life without it.’” – Robert F. Graboyes

“A claim for equality of material position can be met only by a government with totalitarian powers.” – Friedrich A. Hayek

Cybersecurity in the pipeline: A May 7 ransomware attack led Alpharetta-based Colonial Pipeline to shut down service along its 5,500-mile East Coast pipeline, prompting a race among motorists to fill their vehicles and many gas stations to run out of fuel. State officials warned against “price-gouging.” The company said it paid $4.4 million to the hackers. Now the Biden administration has announced it will create a $20 billion fund for energy infrastructure to help governments “cyber modernize” their systems. It would be divided among cybersecurity, grid upgrades and clean electricity.

Chips are down: A global microchip shortage has auto dealers struggling to find new vehicles, manufacturers stockpiling thousands of cars awaiting the chips, and rental companies hiking rates as they run short of vehicles. It’s a seller’s market for used cars; dealers are willing to pay more to fill empty lots; new-car buyers are sometimes waiting weeks and even months for delivery, The Wall Street Journal reports. The microchip shortage is expected to last another 12-18 months.

A raise with that burger? McDonald’s is increasing pay by about 10% for the 36,500 hourly workers at its 660 company-owned restaurants in the United States. Hourly pay will be $11-$17 for entry-level nonmanagerial workers, and $15-$20 for supervisors. Of the 13,900 U.S. restaurants, around 95% are operated by franchisees, who say they are reviewing pay and benefits at their stores. Source: Wall Street Journal

Kids’ count: The numbers of children hospitalized with COVID-19 may be overstated because such counts include many asymptomatic patients who may have entered the hospital for a different reason, according to a study published in Hospital Pediatrics. A child admitted for a broken arm may test positive for COVID-19 yet be asymptomatic; the case is reported but perhaps not the reason for hospitalization. More than 600,000 children ages 12-15 have been vaccinated against COVID-19. Source: Medscape

Tele-vision: With rules relaxed during the COVID-19 public health emergency, 27% of Medicare beneficiaries had a telehealth visit with a doctor or other health professional between the summer and fall of 2020, according to an analysis by the Kaiser Family Foundation. Without federal action, when the public health emergency ends telehealth rules will revert to coverage only for beneficiaries living in rural areas.

Crime and Atlanta: Chicago has more residents and more crime than Atlanta but, adjusting for population, you’re more likely to be a victim of murder, shootings and aggravated assault in Atlanta than in Chicago, according to an analysis by WXIA-TV’s 11Alive News.

Free-range kids: Texas is the third U.S. state, after Utah and Oklahoma, to make reasonable childhood independence the law of the land. The law “is part of a bigger children’s services bill ensuring Texans that the state will not intervene and remove kids from their homes unless the danger is so great and so likely that it outweighs the trauma of entering the foster care system,” according to Reason.com. In 2014, an Austin mother whose 6-year-old child was playing outside was investigated after a passerby reported her to police.

Going nuclear: Existing nuclear power plants will be necessary in the Biden administration’s efforts to reduce greenhouse gas emissions, White House national climate adviser Gina McCarthy said this week. “In many areas continuation of the existing nuclear, as long as it’s environmentally sound and it’s permitted, is going to be absolutely essential” to buy time to develop renewable energy into a bigger part of the energy mix, she said. Source: Reuters

Offshore wind: Despite concerns about the economic and environmental impact, the Bureau of Ocean Energy Management and Environmental Protection Agency have signed off on the construction of Vineyard Wind, an 800-megawatt project about 12 miles off the coast of southern New England that would be the first truly utility-scale development in U.S. waters and will power “up to 400,000 homes.”

This month in the archives: In May 10 years ago, the Foundation published, “USDA’s Feeding Frenzy.” It noted, “USDA’s Agricultural Research Service has been the agency’s hallmark for most of its existence, but the food give-away programs use 80 times as much money. The cost of ‘nutrition assistance’ in USDA is equivalent to research and development in the Department of Defense and more than non-defense spending for those purposes by all other departments.”