Through the years, the Georgia Public Policy Foundation has presented the Freedom Award to  Georgians who have exemplified the principles of private enterprise and personal integrity. The photograph shows the 1995 recipient, Griffin Bell. The first recipient was U.S. Supreme Court Justice Clarence Thomas in 1993, two years after the Foundation was established. The most recent was Georgia businessman, philanthropist and motivational speaker Sunny K. Park, in 2020. This year the Foundation celebrates 30 years of Changing Georgia Policy, Changing Georgians’ Lives. 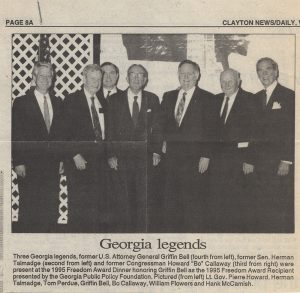 “Too often, we get caught up in the conversations going on on social media and cable news. When I went into these communities to do town halls, nobody brought up those issues on the chyron at the bottom of the newscast. They cared about making sure their kids were going to be able to be competitive and go to college. They wanted to make sure that the industry they’re working in was going to survive. They cared about having good roads. They cared about border security – for people who live on the border, it’s called public safety.” – Will Hurd

“The very basis for our freedom is that we are a Federation of Sovereign States. Our Constitution recognizes that certain rights belong to the state and cannot be infringed upon by the national government. This is the guarantee that small states or rural, sparsely populated areas will have a proportional voice in national affairs. Those who want to do away with the electoral college really mean they want the president elected in a national referendum with no reference as to how each state votes.” – Ronald Reagan

“Saying that less than 10 percent of Covid transmission occurs outdoors is akin to saying that sharks attack fewer than 20,000 swimmers a year. (The actual worldwide number is around 150.) It’s both true and deceiving.” – New York Times

Gas lines: Alpharetta-based Colonial Pipeline, which operates the main gas artery along the East Coast, restarted operations midweek after a shutdown due to discovering ransomware on its computer systems May 7. The shutdown led to panic buying, hoarding, long lines and shuttered gas stations that ran out of fuel. Gov. Brian Kemp temporarily halted the state fuel excise tax and issued an emergency order to expedite fuel shipments by tanker truck. The nation’s largest system, Colonial serves seven airports and 14 states, covers more than 5,500 miles and carries more than 100 million gallons of fuel per day. Source: CNet.com

Infrastructure: The cyberattack on Colonial Pipeline is “a glaring reminder that cyber vulnerabilities in U.S. energy and other systems are the real infrastructure problem that President Biden should be addressing,” The Wall Street Journal editorial board writes.

Policy matters: Through the pandemic, states with policies such as low or no income taxes and worker freedom have been more competitive than states with higher taxes and government spending, according to “Rich States, Poor States,” the 14th annual ranking of states’ economic outlook by the American Legislative Exchange Council. Georgia ranked 14th, behind neighbors Florida (No. 2), North Carolina (No. 5) and Tennessee (No. 12). Utah was No. 1 for the 14th year in a row; New York was No. 50.

Jobs: This week, Georgia joined Tennessee, Alabama and Mississippi in announcing they will withdraw from federal pandemic unemployment benefits. The $300 weekly unemployment checks will be extended through September 6 for states that do not withdraw. Montana, Arkansas, South Carolina, Missouri and Iowa also withdrew, citing good employment numbers and available jobs. Read our news release on Georgia’s announcement and Benita Dodd’s recent commentary on Georgia’s worker shortage.

Deadline: The income tax filing deadline for 2020 state and federal taxes is Monday, May 17. The state followed suit after the federal government extended the deadline, which is normally April 15. The grace period does not extend further, however: All  2020 income tax payments are due May 17.

Overwhelmed: A new IRS report on the 2021 tax-filing season reveals that more than 8.3 million individual tax returns and transactions had yet to be processed as of the end of 2020, a 1,200% increase in carry-over from the prior year compared to a normal year. It blamed pandemic-related office closures and staff shortages; thousands of positions remain unfilled.

COVID-19 update: More than 263 million COVID-19 vaccine doses have been administered and 116.6 million people are fully vaccinated out of the 334 million doses distributed, the Centers for Disease Control and Prevention reported this week. The Georgia Department of Public Health reports COVID-19 cases, deaths and vaccination rates on its website here. Georgia’s mass vaccination sites close May 21.

Medical Mondays: In this week’s Checking Up On Health post, Benita Dodd discusses the differences between nonprofit and for-profit hospitals.

This month in the archives: In May 15 years ago, the Foundation published, “Health Care: Why Incentives Matter.” It noted, “The state needs to be bold: Without fundamental reform such as removing tax inequities, removing barriers to competition and providing incentives for individuals to take ownership of their health, the norm will continue to be unmanageable increases in the ranks of the uninsured and in health costs.”

Visit georgiapolicy.org to read the Foundation’s latest commentary, “National Charter Schools Week a Reminder Georgia Has Much to Celebrate, More to Do,” by Tony Roberts.