Memory Lane: Education options for Georgia’s children have been a primary focus of the Georgia Public Policy Foundation since its early days, as seen in this article from 25 years ago. This year, as the Foundation celebrates its 30th anniversary, the state has come far since 1996: Nearly 70,000 students are enrolled in 96 public charter schools, and the General Assembly has approved legislation that improves student funding for charters. 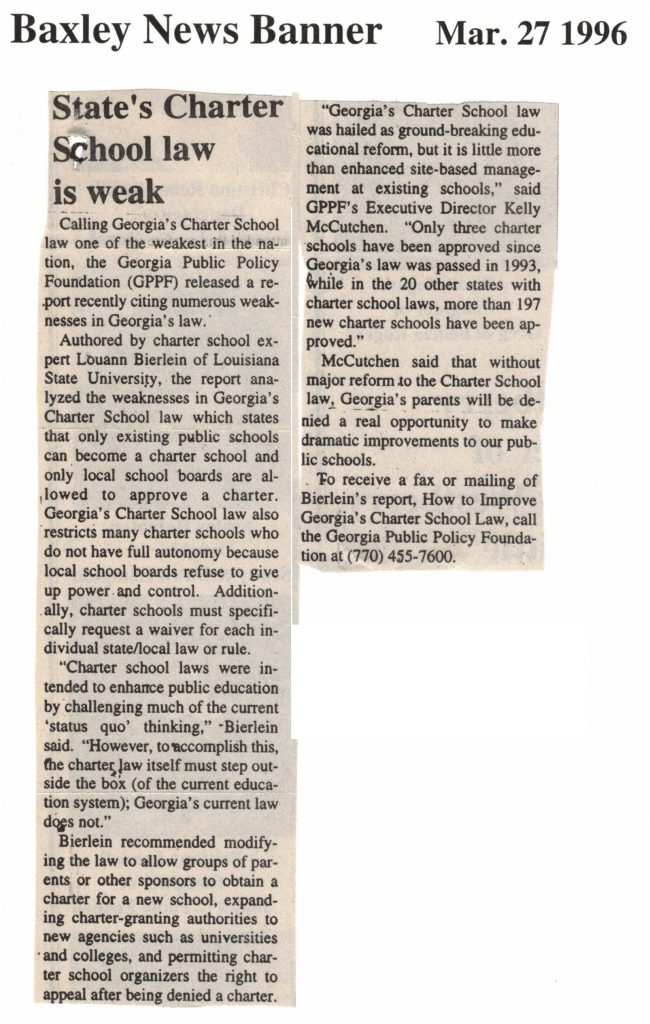 “He who knows only his own side of the case, knows little of that. His reasons may be good, and no one may have been able to refute them. But if he is equally unable to refute the reasons on the opposite side; if he does not so much as know what they are, he has no ground for preferring either opinion. …. Nor is it enough that he should hear the arguments of adversaries from his own teachers, presented as they state them, and accompanied by what they offer as refutations. … He must be able to hear them from persons who actually believe them; who defend them in earnest, and do their very utmost for them.” – John Stuart Mill

“In liberal circles these days there is a palpable horror of the uncurated world, of thought spaces flourishing outside the consensus, of unauthorized voices blabbing freely in some arena where there is no moderator to whom someone might be turned in. The remedy for bad speech, we now believe, is not more speech, as per Justice Brandeis’s famous formula, but an ‘extremism expert’ shushing the world.” – Thomas Frank

“Economic depression cannot be cured by legislative action or executive pronouncement. Economic wounds must be healed by the action of the cells of the economic body – the producers and consumers themselves.” – Herbert Hoover

Rules changing: Effective Thursday through the end of April, a new executive order by Georgia Gov. Brian Kemp relaxes many pandemic restrictions. It includes eliminating the ban on gatherings and ending shelter-in-place requirements. It also reduces distance requirements at restaurants, bars, movie theaters and fitness classes, and prohibits law enforcement from closing an organization for failure to comply.

COVID-19 update: The Georgia Department of Public Health reported the number of cases since the pandemic began totaled 859,388 as of Thursday afternoon, up from 853,273 last week. Deaths were at 16,996; last week the death toll was 16,664. The department updates the information daily at 3 p.m. Vaccinations are now available for anyone over age 16 in Georgia. Visit the website here.

By the numbers: Before Georgia’s pandemic restrictions were relaxed Thursday, the state ranked 24th in the nation for fewest COVID-19 restrictions. Analysts compared the 50 states and Washington, D.C., on 13 metrics ranging from a mask mandate to restrictions on large gatherings. Vermont had the most restrictions and Iowa was least restrictive, followed by Florida, Wyoming, South Dakota and Texas. Georgia also had the seventh-lowest unemployment rate. Source: WalletHub.com

Medical Mondays: In this week’s Checking Up On Health, learn how close the nation could be to herd immunity and what healthcare legislation passed during the recent Georgia legislative session.

Waiving accountability: The U.S. Department of Education has approved the Georgia Department of Education’s waiver of accountability requirements, including having to produce a College and Career Ready Performance Index (CCRPI) summary for the state, school districts and schools. Georgia’s request to waive state assessments for the 2020-21 school year was denied, but the spring Georgia Milestones results will not be summarized by school or district into a CCRPI score.

KO for Hong Kong: For the first time ever, Hong Kong did not appear on the Heritage Foundation’s Index of Economic Freedom for 2021. The annual report includes only “independent countries where governments exercise sovereign control of economic policies,” so Heritage excluded Hong Kong and Macau, where “developments in recent years have demonstrated unambiguously that those policies are ultimately controlled from Beijing.” The United States was No. 20; Singapore topped the list.

Who’ll pay? President Biden’s campaign pledge to tax “only” those wealthy individuals earning over $400,000 appears to be morphing. Now, the White House is suggesting the $400,000 threshold was for “families,” not individuals. “So if you’re a two-income household making $200,000 each, you could get whacked,” a Wall Street Journal editorial points out: “Millions of the Americans Mr. Biden wants to tax aren’t rich. They are successful Americans, typically at the peak of their earning lives, who might make $200,000 for a few years.”

A time for change: Public transportation is among those disrupted sectors unlikely to return to pre-COVID-19 conditions, according to a new study for the Reason Foundation by transit expert Steven Polzin. Ridership was declining before the pandemic, which accelerated the pace of change. After the pandemic, “demographic, economic, and particularly technological changes are likely to leave us in a far more dynamic travel behavior environment than has persisted for the past three-quarters of a century,” Polzin writes.

Intervention: The Consumer Financial Protection Bureau is proposing to effectively prohibit foreclosures through December, according to a Wall Street Journal editorial. It also threatens to penalize mortgage servicers and landlords who don’t act to prevent a surge in “avoidable foreclosures” and evictions when government forbearance programs end. “These crisis programs are distorting the housing market,” the Journal warns, noting demand is rising even as people remain in homes they are unable to afford.

This month in the archives: In April five years ago, the Foundation published, “Transit’s Future is in Innovation, not in Trains.” It noted, “Continuing to resort to 19th-century technology is unwise when a 21st-century generation prefers flexibility and innovative, personalized options like Uber, Lyft, Zip cars and other ride-sharing enterprises.”