Memory Lane: The more things change, the more they stay the same, as this news clipping from 1996 shows. The Georgia Public Policy Foundation, which celebrates its 30th anniversary in 2021, continues to campaign tirelessly for government to reduce regulations on businesses, especially small businesses. 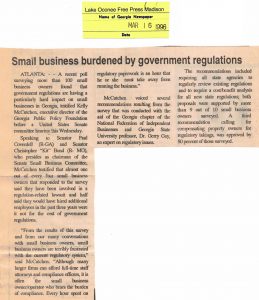 “For years you have hired people to do work around your house. Instead of paying them in full every year, you use the money to buy holiday gifts, so that you are popular with your friends. Each year you tell your household workers that your children will pay the balance you owe, when they grow up. Have your budgets been truly balanced?” – Sheila Weinberg

“The Georgia bill that was just signed into law by Gov. Brian Kemp has many provisions intended to protect the security and integrity of the election process, not prevent eligible individuals from voting or from succumbing to thirst while waiting in line to vote. You have to have both access and security in elections and the criticisms of Georgia are intentionally misleading, shortsighted, and show remarkable ignorance of how voting and elections are actually conducted.” – Hans von Spakovsky

“While we have likely lost hundreds of private schools, … tens‐​of‐​thousands remain. The key to their long‐​term health – and the health of a free, diverse society – is to do exactly what we see many states working toward right now: Give families control of education dollars, and let private schools live or die based on whether families choose them.” – Neil McCluskey

Citizen’s arrest: Legislation to overhaul the state’s citizen’s arrest statute passed the Georgia House unanimously after passing in the Senate; it heads to the Governor’s desk for his signature.

Second chances: President Biden issued a declaration proclaiming April Second Chance Month. “By focusing on prevention, reentry and social support, rather than incarceration, we can ensure that America is a land of second chances and opportunity for all people,” Biden declared in a statement. According to Prison Fellowship,  approximately one in three American adults has a criminal record, “which limits their access to education, jobs, housing and other things they need to reach that potential.” The Foundation has marked Second Chance Month since 2018; view the events on the Foundation’s YouTube channel from 2018, 2019 and 2020.

Driven to crime: More than 200,000 Georgians see their driver’s licenses suspended every year because they are unable to pay a fine, according to the Georgia Justice Project. “Out of necessity, 75% of people whose licenses are suspended continue to drive,” and 50,000 Georgians end up arrested each year – resulting in more fines, and perhaps jail time. Legislation that would have allowed for a waiver upon submission of a pauper’s affidavit did not come up for a vote during the session that ended Wednesday.

Learning pods: Legislation that would protect learning pods from regulation is headed to the Governor’s desk for his signature. Foundation President Kyle Wingfield commended the Legislature: “By ensuring that this innovative, flexible approach will remain unregulated, lawmakers are ensuring Georgia’s families will have options when they need them most.” Find out more about learning pods here.

Up on apps: Total app sales this quarter of $32 billion were 40% more than consumers spent in the first quarter of 2020, when the initial wave of pandemic lockdowns was just beginning. According to app analytics firm App Annie, consumers spent $9 billion than they did a year ago as people stayed at home and started seeking more entertainment through mobile games, video streaming and social apps.

More to come: The Wall Street Journal editorial board warns that the middle class is about to pay for the largest tax bill since 1968 as a result of President Biden’s agenda. This week, he proposed the largest corporate tax increase in decades. “Mr. Biden’s corporate tax increases will hit the middle class hard – in the value of their 401(k)s, the size of their pay packets, and what they pay for goods and services,” the editorial noted.

States’ rights: The Georgia Public Policy Foundation joined a coalition of organizations in signing a letter that urges Treasury Secretary Janet Yellen to respect states’ powers as federal money is handed out in the latest stimulus package. “States should have freedom to make their own tax policy in accordance with the preferences and needs of their citizens,” the letter states.

Reforms: Election integrity legislation signed by Gov. Brian Kemp continues to generate criticism, including from some Georgia-headquartered companies and President Biden. “There is nothing ‘Jim Crow’ about requiring a photo or state-issued ID to vote by absentee ballot – every Georgia voter must already do so when voting in-person,” Kemp responded in a statement.

COVID-19 update: The Georgia Department of Public Health reported the number of cases since the pandemic began totaled 853,273 as of Thursday afternoon, up from 845,560 last week. Deaths were at 16,664; last week the death toll was16,257. The department updates the information daily at 3 p.m. Visit the website here.

Family visits: Legislation to allow relatives an in-person patient visit at a medical facility was approved by the House on the final day of the session but tabled by the Senate.

Medical Mondays: In this week’s Checking Up On Health, get an update on federal COVID-19 policies, the effectiveness of Samaritan laws in preventing opioid deaths, and more.

This month in the archives: In April 25 years ago, the Foundation published, “Urgent Reform Needed for Georgia’s Abused, Neglected, Foster, and Adopted Children.” It noted, “Condoning and subsidizing serious abdications of personal responsibility by abusive and irresponsible parents is inexcusable. The innocent child victim deserves better!”

Have a great Easter weekend!