States have waiting for Georgia’s innovative Medicaid 1115 waiver to take effect and lead the exodus from ObamaCare. But there’s a new pharaoh in town, and he’s changed his mind about letting Georgia’s people go: Suddenly the thoughtful flexibility Gov. Brian Kemp believed was a done deal to give more low-income Georgians Medicaid coverage is no longer good enough.

Yep. The waiver approved by the Trump administration’s Center for Medicare and Medicaid Services (CMS) in October last year is now “pending,” according to the Biden administration’s CMS. Which, it appears, is one way to say to Georgia, “We’re looking for a way to block your escape.”

Georgia’s 1115 waiver implements a demonstration program, Pathways to Coverage, “for working-age Georgia adults who are ineligible for Medicaid to opt into Medicaid coverage by participating in qualifying activities like work and education, as well as meeting premium and income requirements.”

The CMS approval letter noted, “As this statutory text makes clear, two Medicaid objectives are to enable states to “furnish … medical assistance” – i.e., healthcare services – to certain vulnerable populations and to furnish those populations with rehabilitation and other services to help them “attain or retain capability for independence or self-care.”

It would apply to Georgians ages 18-64 with income up to and including 100% of the federal poverty level (FPL). It would begin July 1 and operate through September 30, 2025, and it would not affect Medicaid-eligible Georgians. More than 30,000 individuals were projected to receive coverage in Year 1, with nearly 65,000 Georgians receiving coverage, either through Medicaid or Medicaid premium assistance enrolling them in their employer’s insurance, during the five-year period. 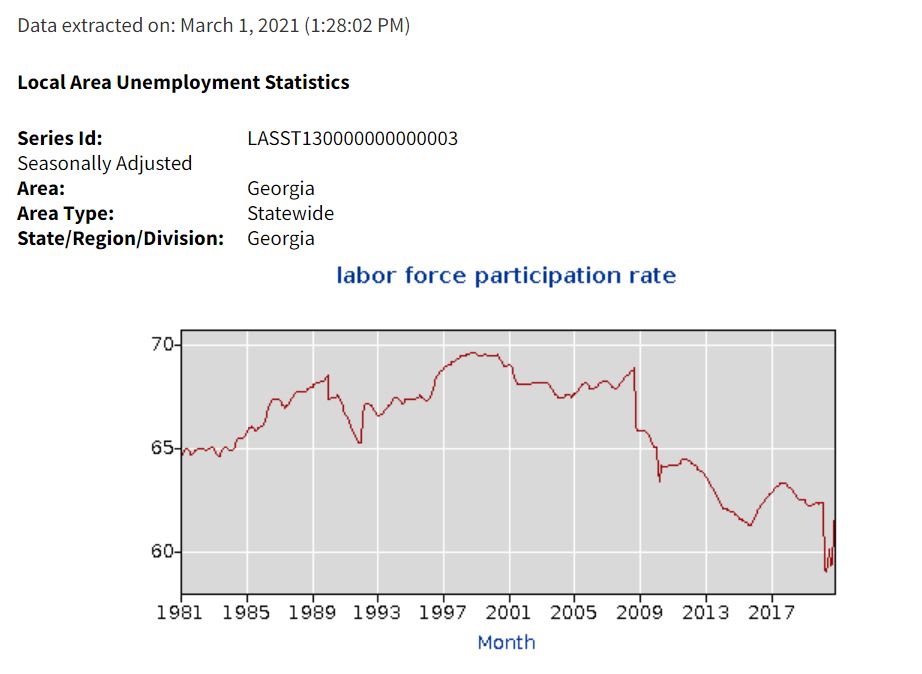 Mind you, Georgia’s unemployment rate is among the lowest in the nation, and the state has been open for business since April 2020, thanks to Gov. Brian Kemp. As mentioned earlier, the pilot project was set to begin in July. Apparently the Biden administration has a crystal ball, able to see in February that community engagement in Georgia will be infeasible in July.

Why is the work requirement so important? While Georgia’s unemployment rate is below 6% (as of December 2020), its labor force participation rate is also low. Just 61.9% of Georgia’s working-age population were employed or seeking work in November 2020. The national average stood at 61.5%. While that is probably pandemic related,  It has hovered around 63% since 2013 after the economic decline that began in 2008.

Part of that decline in the workforce is demographics, including the aging population, the “graying of America.” But the dignity of work should be encouraged, and to the extent Americans are capable of contributing to their healthcare costs, that also should be encouraged. So, too, should flexibility for states such as Georgia that want to encourage productivity – for taxpayer relief, for personal responsibility and for individual initiative.

Unfortunately, the Biden administration appears set on sending Georgia back to the drawing board.

Now the question I ask about any welfare reform proposal is: Will it help people become self-sufficient and lead a full life, or will it keep them down in a state of dependency? I’m afraid that several Members of Congress have suggested some proposals that, while claiming to require work-related activities, would make staying on welfare more attractive. Their misguided compassion would only bring more people into the welfare system, encourage them to stay on the welfare rolls longer, and discourage work.

Bad to worse: Not only is the Biden administration blocking states from innovation, it’s trying to buy them off with bigger subsidies. Unsubsidized enrollment in the Affordable Care Act dropped 45% between 2016 and 2019, according to the CMS. The $1.9 trillion “COVID-19 relief” bill moving through Congress includes provisions to subsidize more Americans’ healthcare premiums, A Wall Street Journal editorial points out: “Democrats would also remove the income cap for receiving subsidies … and reduce a person’s maximum contribution to 8.5% of income from 10%.” The cost? $34 billion over two years. But, as the editorial notes, “that is merely the beginning. The politics are such that the benefit will never be revoked. The more generous subsidies will be captured by insurers who will continue to raise premiums, and the specter of high costs will push lawmakers to intervene again. Rinse, repeat. Smaller businesses may move their workers onto the exchanges instead of offering their own insurance.

The worse? The House bill includes a 5 percentage-point hike in funding to states (like Georgia) that have declined to expand Medicaid, if they expand coverage to those able-bodied adults without children who have incomes above the poverty line.

Easing the healthcare cost burden on Americans is a great idea. Taking care of those who truly need help should be the focus of government assistance. But one does that by improving affordability, by lowering costs and facilitating innovation and flexibility. Spending more and passing those costs onto American taxpayers – current and future generations — in the guise of COVID-19 relief is unconscionable.

“Politicians love to play Santa Claus by handing out favors to voters, while depicting insurance companies as Scrooge when they raise insurance premiums to cover the costs of government mandates. This kind of political game has been played for generations in other areas besides insurance.” – Thomas Sowell

Compiled by Benita M. Dodd, vice president of the Georgia Public Policy Foundation. For more healthcare updates, sign up for the Friday Facts