Memory Lane: Expanding school choice has been front and center for the Georgia Public Policy Foundation since its inception, as this article from 1992 demonstrates. The Foundation, which celebrates its 30th anniversary this year, continues to fervently champion education options. 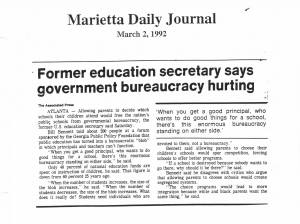 “Enlighten the people generally, and tyranny and oppressions of body and mind will vanish like evil spirits at the dawn of the day.” – Thomas Jefferson, 1816

“Friends and neighbors complain that taxes are indeed very heavy, and if those laid on by the government were the only ones we had to pay, we might more easily discharge them; but we have many others, and much more grievous to some of us. We are taxed twice as much by our idleness, three times as much by our pride, and four times as much by our folly; and from these taxes the commissioners cannot ease or deliver us by allowing an abatement. However, let us hearken to good advice, and something may be done for us: ‘God helps them that help themselves,’ as Poor Richard says.” – Benjamin Franklin, “The Way to Wealth”

“It isn’t what we don’t know that gives us trouble, it’s what we know that ain’t so.” – Will Rogers

What’s the difference? Most private schools have opened safely for in-person learning, along with hundreds of public charter schools, “independent of district administration to manage or support them in any way,” writes Jeanne Allen in Forbes.  “But most public systems remain closed. Why? … Well for starters, individual private schools and charters are making decisions locally, independently, without the bureaucracy or interests of unions and education groups to interfere.”

Give or take? A 21-state study of district-level fiscal data collected between 2000 and 2017 finds that, in most states, an increase in the percentage of students attending independent public charter schools was associated with a significant increase in their host districts’ total revenue per pupil; total spending per pupil; local revenue per pupil; and per-pupil spending on support services. Host districts’ instructional spending per pupil also remained neutral to positive. Source: Fordham Institute

Global chilling: The National Oceanic and Atmospheric Administration (NOAA) estimated that snow covered nearly three-quarters of the continental United States this week. At 73% coverage as of February 16, this is “the greatest extent on record in the database, which dates back to 2003.” Source: Slashgear

Trending down: The COVID-19 pandemic appears to be declining globally, with infections down everywhere except the Eastern Mediterranean region (Middle East), according to World Health Organization data. Cases dropped 16% last week to 2.7 million, the fifth consecutive week that infections dropped after peaking at more than 5 million the week of January 4.

Georgia COVID-19 update: As of Thursday afternoon, the Georgia Department of Public Health reported the number of cases since the pandemic began totaled 798,785, which is up from 783,821 a week ago. Deaths were at 14,358; last week the total was 13,672. The department updates the information daily at 3 p.m. Visit the website here.

Vaccines and variants: According to a Department of Public Health dashboard, the state had administered 1,606,622 vaccines by Thursday afternoon, 82% of the total shipped to the state by the federal government. The vaccines developed by Pfizer-BioNTech and Moderna appear to be highly effective against the more transmissible variant of the coronavirus first detected in Britain but less able to neutralize the strain now dominant in South Africa, The Washington Post reported, citing the New England Journal of Medicine.

Telehealth: The House Health and Human Services Committee approved a bill that would amend the Georgia Telehealth Act to allow a healthcare provider to practice telehealth from home. It also would prohibit insurers from requiring a deductible or an in-person consultation before covering telehealth services.

The importance of being open: Georgia ranked among the top 10 exporting states in 2020 for the first time. Georgia merchandise experienced the lowest rate of export contraction among all top 10 states, “despite headwinds from a global pandemic,” Gov. Brian Kemp announced this week. About 90% of Georgia merchandise exports are manufactured goods. Georgia’s second-largest manufacturing industry, aerospace products, remain the state’s No. 1 export, totaling $9.98 billion in 2020.

Foundation in the media: Georgia Health News and The Atlanta Journal-Constitution quoted Kyle Wingfield in articles about the Biden administration placing a hold on Georgia’s innovative Medicaid waiver proposal.

This month in the archives: In February five years ago, the Foundation published “Which Way Employment?” It noted, “The U.S. Labor Department calculates an ‘Economic Dependency Ratio,’ which is the number of people not in the work force (including the Armed Forces and children) per 100 people in the work force. That ratio was 92 in 1992. It rose to 102 in 2012, and is predicted to be 106 in 2022.” Updated estimates from September 2020 project it at 104.1 by 2029.