Memory Lane: Rogers Wade (right), then-president of the Georgia Public Policy Foundation, chats with U.S. Sen. John McCain of Arizona after McCain’s keynote address at the Foundation’s 15th anniversary celebration in 2006. Read excerpts here; view McCain’s speech at the event on the Foundation’s YouTube channel here. The senator and former prisoner of war died in 2018 at age 81. Wade is now Chairman of the Board of Trustees of the Foundation, which celebrates its 30th anniversary this year. 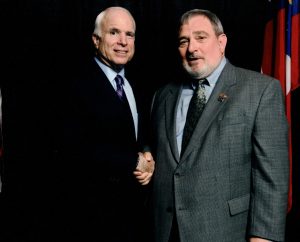 “There are persons who constantly clamor. They complain of oppression, speculation, and pernicious influence of wealth. They cry out loudly against all banks and corporations, and all means by which small capitalists become united in order to produce important and beneficial results. They carry on mad hostility against all established institutions. They would choke the fountain of industry and dry all streams.” – Daniel Webster, 1838

“We discover that the fortunes realized by our manufacturers are no longer solely the reward of sturdy industry and enlightened foresight, but that they result from the discriminating favor of the Government and are largely built upon undue exactions from the masses of our people. As we view the achievements of aggregated capital, we discover the existence of trusts, combinations, and monopolies, while the citizen is struggling far in the rear or is trampled to death beneath an iron heel. Corporations, which should be the carefully constrained creatures of the law and the servants of the people, are fast becoming the people’s masters.” – Grover Cleveland, State of the Union,1885-1888

“Changing the rules of a game right before it’s played normally inspires skepticism, if not cynicism. But a new Time magazine report celebrates a well-funded effort to change voting processes and the flow of political information before the 2020 elections. Time’s Molly Ball happily describes a ‘conspiracy’ among the progressive left, big labor, big business and the Washington establishment … .” – James Freeman

Unhealthy spending: While states and U.S. territories paid contractors about half of their Medicaid spending for healthcare and other services in 2018, Puerto Rico paid contractors almost all of its Medicaid spending – 97% of $2.5 billion – the Government Accountability Office reports. “We found that the Centers for Medicare & Medicaid Services (CMS) does not oversee contracting in Puerto Rico, where former officials face allegations of contract fraud,” the GAO notes, recommending that the CMS begin risk-based oversight of contracting in Puerto Rico.

Tracking vaccines: The federal government has created a dashboard to track development of the COVID-19 vaccines supported by Operation Warp Speed, the effort enabling multiple COVID-19 vaccine candidates to speed up development. View the tracker here. Of interest, it shows the Pfizer-BioNTech two-dose vaccine was tested on “healthy participants” ages 18-55, while Moderna’s vaccine is expected to be effective for “up to two years” after the second dose. Source: GAO.gov

COVID-19 status update: As of Thursday afternoon, the Georgia Department of Public Health reported the number of cases since the pandemic began was at 783,821, up from 763,077 a week ago. Deaths were at 13,672; last week the total was 13,048 deaths. The department updates the information daily at 3 p.m. Visit the website here.

Amended budget: The Georgia Legislature approved a midyear budget that would provide $1,000 bonuses to most state employees, give 10% raises to prison guards, and increase spending on public healthcare and education. The $1,000 bonuses will go to the 57,000 state employees who earn less than $80,000 a year; Gov. Brian Kemp had announced last month he would also use federal CARES Act money to provide one-time bonuses of $1,000 for teachers and school staffers. Notably, the amended budget increased spending by $654 million for the fiscal year ending June 30. Source: Staff and news reports

Legislation of note: The Georgia House approved legislation to extend until July 2022 the COVID-19 business liability protections passed during the 2020 legislative session; the bill heads to the Senate. The House Human Relations and Aging Committee heard testimony on a bill that would prohibit hospital and nursing home bans on visits with patients by designated family members or friends during a declared public health emergency.

Housing affordability: U.S. home prices are rising at an accelerating pace amid the strongest housing boom since 2006. The median sales price for existing homes in each of more than 180 metro areas tracked by the National Association of Realtors rose in the fourth quarter from a year earlier, the association said Thursday. Even as the pandemic reduced supply, demand surged because of record-low interest rates and the desire of many households to upsize for remote work. Home sales in 2020 rose 5.6%. Source: Wall Street Journal

City woes: Atlanta’s affluent Buckhead area is facing rising crime, including numerous shootings at its upscale Lenox Mall, street racing and assaults. Some dissatisfied residents are considering cityhood, the Atlanta Business Chronicle reports. Mayor Keisha Bottoms and the Buckhead Coalition oppose the efforts by the Buckhead Exploratory Committee; Bottoms said the crime-fighting effort requires partnership “not just in Buckhead but throughout the city of Atlanta.”

Redefine ‘crucial:’ An Atlanta Business Chronicle headline reports Cobb County’s self-taxing Community Improvement Districts (CIDs) are moving forward with “crucial projects.” The Town Center and Cumberland CIDs are relaunching a one-year bikeshare pilot program shut down after the program’s previous bike provider closed last May. Meanwhile, lenders foreclosed on the Town Center CID’s economic engine – Town Center at Cobb mall, which opened in 1986 – after owners defaulted on their loan and there were no takers for the $130,400,000 opening bid.

This month in the archives: In February 15 years ago, the Foundation published “Georgia Hairbraiders Entangled in Regulatory Excess.” It noted, “It takes a minimum of 12 hours of training to carry a firearm as a private security guard in Georgia. Basic training is only 120 hours for firefighters or 404 hours for police officers. It would take expert hairbraider Fatou Magassouba 1,500 hours of training to legally braid hair.” Today, a self-employed braider no longer needs an occupational license in Georgia – unless they want to wash the client’s hair, that is.

Have a great Presidents Day weekend! (Did you know the 46 presidents hail from just 21 states?)