Memory Lane: Zell Miller, who was governor of Georgia before becoming U.S. senator for Georgia, died March 23, 2018, at age 86. His birthday would have been February 24, and the privatization and outsourcing policies he implemented were championed by the Georgia Public Policy Foundation as one of its first initiatives in 1991. This 1991 editorial by the Atlanta Journal is a reminder of how far Georgia has come – and how important the Foundation’s research continues to be as we celebrate 30 years of policy over politics in Georgia. 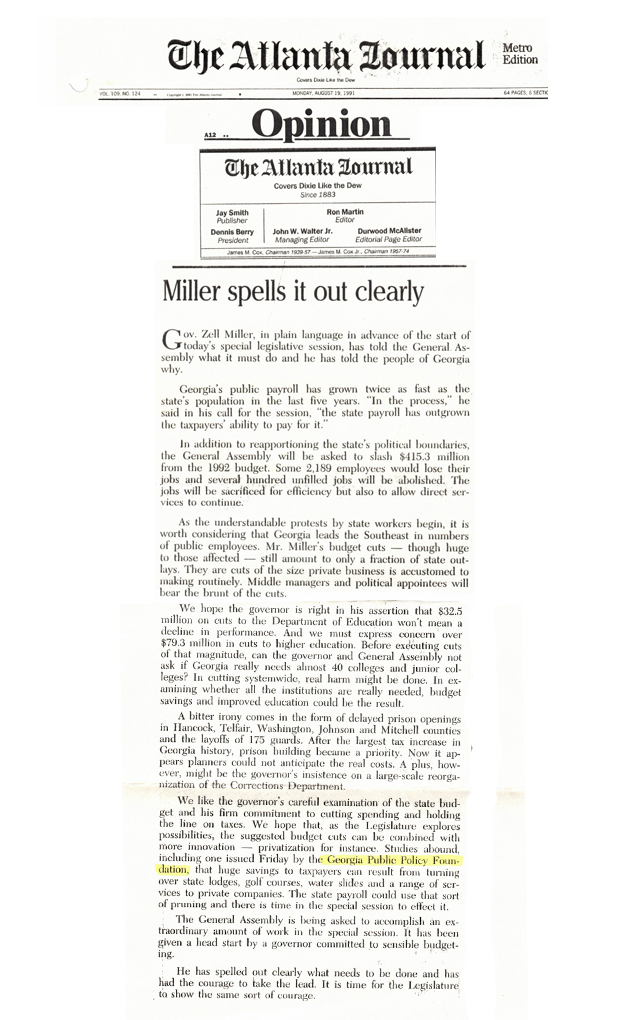 “My son, a former U.S. Marine, who has slowly built a one-man grading business, becomes visibly upset when talking about potential student-loan forgiveness. He asks: ‘Even though I chose not to attend college, why couldn’t the government have given me a $50,000 forgivable loan to help me get a start?’ I don’t have an answer.” – John Williamson, Ellijay, Ga., Wall Street Journal, February 20, 2021

“When a new source of taxation is found it never means, in practice, that the old source is abandoned. It merely means that the politicians have two ways of milking the taxpayer where they had one before.” – H.L. Mencken

‘Standardized’ tests: The Biden administration announced this week that state education departments must administer standardized testing this year but will have “significant flexibility” in how tests are administered and the results used. The flexibility includes extending the testing window and tests to the summer or fall, remote testing and shortening tests. Results can be used as “information for parents and educators to target resources and support, rather than for accountability purposes this year,” according to guidance issued.

$15 vs. 1.4 million: Raising the minimum wage to $15 an hour would lift 900,000 people out of poverty but push 1.4 million people out of work, according to a new Congressional Budget Office report. Also, “For families that experienced a decline in business income or saw no change in their labor income but faced higher prices for goods and services, real income would fall.”

Shocking growth: Registrations of electric vehicles (EV) in the nation reached “record market share” in 2020, accounting for 1.8% of registered vehicles, according to an article in ChargedFleet.com. New EV registrations varied from 11% in the San Francisco area to 1.1% in the Southeast and 0.8% in the Midwest. Industry analysts IHS Markit predict EVs will have 10% of market share by 2025.

Low energy: The nation saw energy consumption plummet 7.8% in 2020, the largest year-on-year decline in at least three decades, according to a new report. Energy demand from the transportation sector fell hardest, slipping 14.4% as Americans commuted and travelled less. Electricity demand declined just 3.8%, with the commercial and industrial consumption drop partly offset by the increase in domestic use as Americans stayed home. Source: Energy Live News

Food for thought: South Dakota Gov. Kristi Noem is seeking to codify emergency telehealth measures contained in two 2020 pandemic executive orders. They eliminated the requirement for an in-person exam before a provider begins telehealth treatment with a new patient; allowed providers to prescribe certain medications via telehealth; allowed phone consultations for some services, and allowed the state to recognize medical licenses from states included in the Uniform Emergency Management Assistance Compact (EMAC), Additionally, this week Noem has signed into law universal occupational licensing recognition for some professionals from other states.

Home care: A bipartisan bill introduced in the U.S. Senate this week would allow Medicare recipients to continue to use telehealth from home even after pandemic healthcare waivers end. Existing “geographic and originating site” rules allow telehealth services if Medicare patients live in an area defined as having a shortage of health professionals. They also must use telehealth services from an existing medical clinic or doctor’s office, meaning they must travel to a doctor’s office to use a webcam to chat with a doctor in a different office. Source: Reason.com

National COVID-19 news: The nation’s COVID-19 death toll reached 500,000 Wednesday, according to data from Johns Hopkins University, with about 200,000 deaths occurring since mid-December. As vaccine shipments ramped up, the U.S. Food and Drug Administration staff endorsed Johnson & Johnson’s one-shot vaccine, clearing the path for an emergency use authorization as soon as this week; the company expects to have 20 million doses ready by the end of March

Georgia COVID-19 update: As of Thursday afternoon, the Georgia Department of Public Health reported the number of cases since the pandemic began totaled 812,612, which is up from 798,785 a week ago. Deaths were at 14,989; last week the total was 14,358. The department updates the information daily at 3 p.m. Visit the website here.

Can’t see the profits for the forest: Georgia’s forestry industry produces more than $36.5 billion in total sales and supports more than 141,000 jobs. The Wall Street Journal reports timber growers across the South are gaining nothing from soaring prices for finished lumber. Saw mills are harvesting the profits, the newspaper reports. “Saw mills are running as close to capacity as pandemic precautions will allow and are unable to keep up with lumber demand, but … so many trees have been planted between the Carolinas and Texas that mills are paying the lowest prices in decades for logs.”

Voting: Election activity took place in both chambers this week. The Senate passed four bills relating to election processes on Tuesday. SB 40, which allows for the opening and tabulation of absentee ballots eight days prior to Election Day, passed the Senate unanimously. Three additional bills, SB 67, SB 184 and SB 188, passed along mostly party lines. The House Special Committee on Election Integrity passed an elections omnibus bill HB 531 out of committee on Wednesday along party lines.

Education: The House Education Committee voted to advance HB 60 for a vote on the House floor, which would establish educational scholarship accounts. The Senate Education Committee advanced SB 47 to the Senate for a floor vote, which would expand the Georgia Special Needs Scholarship Act by replacing the 11 existing qualifying conditions with 21 classes of conditions.

Licensing: The House also voted 163-0 to pass HB 268, the Occupational Therapy Licensure Compact Act. This bill would allow currently licensed occupational therapists in other states to practice in Georgia.

Telehealth: On Monday, the House passed the Georgia Telehealth Act (HB 307) by a vote of 158-0. This legislation allows healthcare providers to practice telehealth from home. It also would prohibit insurers from requiring a deductible or an in-person consultation before covering telehealth services.

This month in the archives: In February five years ago, the Foundation published “Government Trails, Technology Triumphs in Transportation Policy.” It noted, “American ingenuity continually provides better, more cost-effective options in transportation policy. If only government would step aside, Americans would prove you need not ‘build your way out of congestion.’”

Visit georgiapolicy.org to read the Foundation’s latest commentary, “Get on Board with Buses for Transit Equity,” by Baruch Feigenbaum.