Memory Lane: The debate about education funding is not new, as demonstrated in this clipping from a 1992 editorial in The Augusta Chronicle. As the Foundation celebrates its 30th anniversary in 2021, each Friday Facts will include a little trip down Memory Lane from our three decades of “Changing Georgia Policy, Changing Georgians’ Lives.” 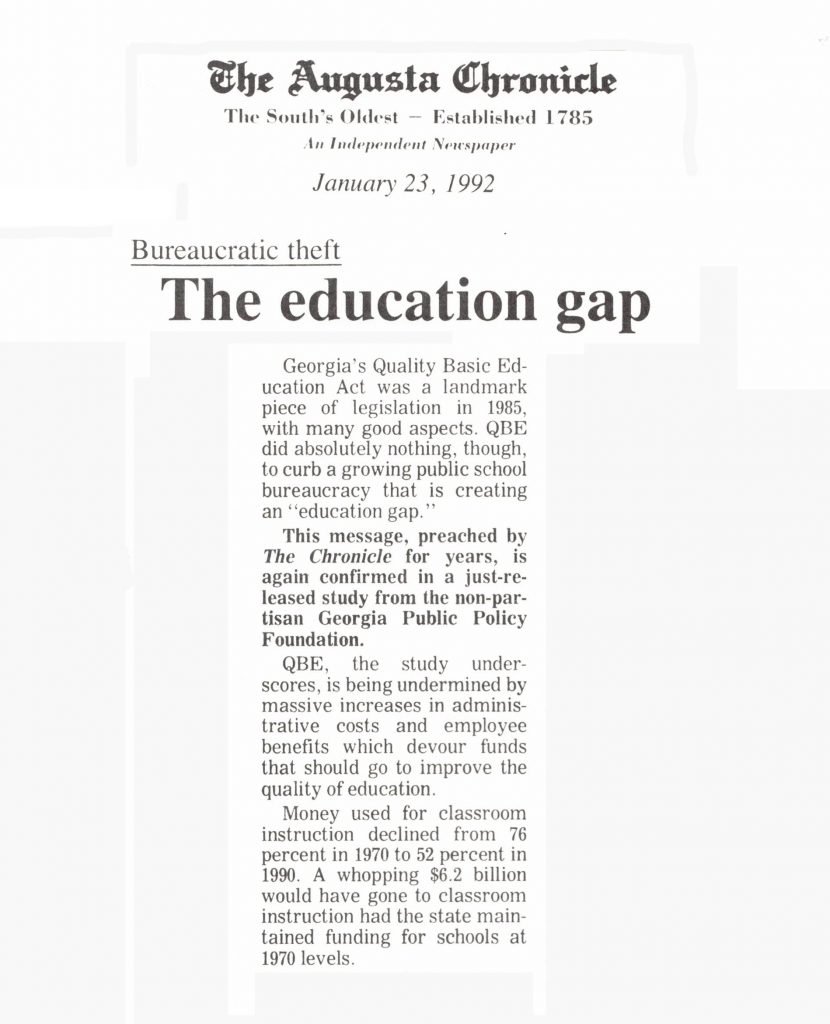 “The greatest good we can do our country is to heal its party divisions and make them one people.” – Thomas Jefferson

“History teaches endless lessons whether people want to learn them or not. Its pages instruct us painfully that the two greatest dangers from government are mission creep and creeps on a mission. The last thing you would ever hear from the lips of Calvin Coolidge were arrogant pretensions to knowledge or grand plans to ‘fundamentally transform’ America. He was smart enough to know what his job was – to ‘preserve, protect and defend the Constitution,’ not to ignore it, shred it or rewrite it.” – Lawrence Reed

“If the densification agenda was weak before, it is almost delusional now. Even before [COVID-19], the largest core-city populations have been stagnant or declining … . Nationwide since 2010, 90% of major metropolitan-area growth took place in the suburbs and exurbs. Jobs followed this pattern as well before [COVID-19]   started undermining the economic rationale for high-rise office towers and massive new transit investment.” – Joel Kotkin

46th president: Joe Biden was inaugurated Wednesday as the nation’s 46th president. President Biden, who served as the 47th vice president under Barack Obama, was a U.S. senator for Delaware from 1973 to 2009. Biden’s vice president, Kamala Harris, swore in Democrat senators Jon Ossoff and Raphael Warnock of Georgia just hours after she was sworn in. The two new Democrats give the Senate a 50-50 split, effectively handing Democrats the majority: Harris, as Senate president, will be the tie-breaking vote.

Energy executive orders: By executive order on his first day in office, President Biden declared the United States would return to the U.N. Paris climate agreement, revoked a permit for construction of the Keystone XL oil pipeline, and temporarily halted oil and natural gas leasing in Alaska’s Arctic National Wildlife Refuge. Read Foundation commentaries opposing the Paris agreement and in support of the Keystone pipeline.

Tech hub: Atlanta-based Southern Co. and Apple will each invest $25 million to build the Propel Center, a technology and innovation hub for students based at the Atlanta University Center, the nation’s largest consortium of Historically Black Colleges and Universities. The center will include a business incubator and digital learning and could become a recruiting ground for companies diversifying their workforce. Blacks represent just 8% of the U.S. tech sector labor force, according to a 2018 Brookings Institution study. Source: Atlanta Business Chronicle

1776 Commission: The 1776 Commission, established by President Trump, was abolished by one of President Biden’s first executive orders. Its 1776 Report was issued January 18. Hillsdale College President Larry Arnn, a commission member, rejected criticism of the report, asserting, “The report calls for a return to the unifying principles stated in the Declaration of Independence. …. It calls for a civics education that fosters reverence for these principles, beginning with an accurate and honest teaching of American history. It is not a partisan document.”

Delayed day in court: Georgia’s court system faces a backlog of jury trials due to COVID-19. Jury trials were largely suspended under the state of judicial emergency State Supreme Court Chief Justice Harold Melton first ordered in March 2020. He told legislators at a joint appropriations hearing, “It can easily take a year to two years to dig out of a jury trial backlog.” A silver lining is that the trial delays enabled the GBI to clear nearly half of the roughly 46,000 cases backlogged in the agency’s crime lab, GBI Director Vic Reynolds told lawmakers. Source: Capitol Beat News Service

Vaccines: The Centers for Disease Control and Prevention reports that as of January 20, nearly 36 million doses of COVID-19 vaccine doses have been distributed and more than 16.5 million have been administered. Of those, more than 1.9 million were dispensed at long-term care facilities. U.S. vaccinations began December 14. The CDC tally of vaccine doses are for both Moderna and Pfizer/BioNTech.

Checking Up On Health: Surviving COVID-19 is no guarantee of restored health. Pandemic survivors who suffer various often-debilitating symptoms long after the original infection is over are known as “long haulers.” They’re not who you might think they’d be. Read more in this week’s Checking Up On Health.

COVID-19 status update: The pandemic tally surged over 700,000 this week in Georgia. As of Thursday afternoon, the Georgia Department of Public Health reports 701,308 COVID-19 cases and 11,511 COVID-19 deaths in Georgia since the pandemic began. The department updates the information daily at 3 p.m. Visit the website here.

More moratorium I: The Centers for Disease Control and Prevention announced the moratorium on residential evictions, scheduled to end this month, is extended “until at least March 31.” CDC Director Rochelle Walensky announced in a news release: “We must act to get cases down and keep people in their homes and out of congregate settings – like shelters – where COVID-19 can take an even stronger foothold.”

More moratorium II: Noting that President Biden is proposing an additional nine-month moratorium on residential evictions, the National Apartment Association and the National Multifamily Housing Council responded, “allocated rental assistance funds do not fully address the $70 billion in outstanding debt nor accruing debt moving forward. The industry simply cannot continue operation under these policies without disastrous harm to housing affordability.” This year, the Foundation will intensify its focus on housing affordability policy solutions for Georgia.

This month in the archives: In January 15 years ago, the Foundation published “Insure All Georgians.” It noted, “A 2004 Kaiser Family Foundation national study found that the societal cost of the uninsured is $125 billion. Regardless of how one views the issue, the cost to society is high. Without insurance, the health, lives and financial security of families are at extreme risk.”