As the Georgia Public Policy Foundation celebrates its 30th anniversary in 2021, each Friday Facts will include a little trip down Memory Lane from our three decades of “Changing Georgia Policy, Changing Georgians’ Lives.” It’s a testament to this policy research organization’s credibility and integrity that the media have quoted, interviewed, cited and published the Foundation thousands of times across Georgia through the years. Here’s one from 1991. 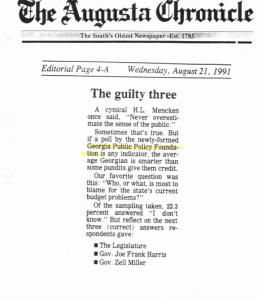 “With governing power and focus increasingly drawn to Washington, and from Washington to the executive branch, each change in presidential administration leaves 49% of our nation feeling invaded. In a nation as diverse as the United States, one size does not fit all. One government cannot know all the intricacies of our unique communities. … One government was never meant to be the single point of attention or the single point of failure or success.” – Ken Ivory, “A Republic Worth Keeping”

“Violence ever defeats its own ends. Where you cannot drive you can always persuade. A gentle word, a kind look, a good-natured smile can work wonders and accomplish miracles. There is a secret pride in every human heart that revolts at tyranny. You may order and drive an individual, but you cannot make him respect you.” – William Hazlitt

“[T]ax cuts are not just something that all taxpayers deserve, but also the best way to curb government spending. It is the best kind of tax reform. If the money never reaches the table, Congress can’t gobble it up.” – Zell Miller

Capitol incursion: Tens of thousands of supporters of President Trump gathered in Washington on January 6 for a rally to protest the congressional vote to certify the Electoral College votes from the November presidential election. After the president addressed the crowd, several hundred protesters stormed the U.S. Capitol. The action resulted in the deaths of five people, including an officer struck with a fire extinguisher. Officers and rioters were among the injured. No lawmakers were injured. Law enforcement officials posted photographs of many of the perpetrators and dozens have been arrested. The House voted Wednesday to impeach the president, accusing him of incitement of insurrection; Senate Majority Leader Mitch McConnell said he would not take up the trial before Trump leaves office on January 20. Meanwhile, social media companies shut down the user accounts of Trump and many of his supporters, as well as those of some conservative commentators. Corporations seeking to distance themselves from the events announced they were reconsidering political donations. Source: News reports

COVID-19: As COVID-19 deaths and cases surge, the Trump administration instructed states this week to immediately begin vaccinating every American 65 and older, as well as adults with medical conditions that put them at higher risk. Meanwhile, the Centers for Disease Control and Prevention announced that all air passengers must test negative for the virus within three days of their arrival in the United States.

COVID-19 status update: As of Thursday afternoon, the Georgia Department of Public Health reports 660,720 COVID-19 cases and 10,721 COVID-19 deaths in Georgia since the pandemic began. The department updates the information daily at 3 p.m. Visit the website here.

Up, up and away: Home prices in metro Atlanta are projected to grow 6.7% in 2021, compared to a 5.7% increase nationally, the Atlanta Business Chronicle reports. The region is listed among the 20 markets expected to experience the nation’s largest home price increases and is expected to have the steepest increase in the Southeast outside of Florida metro areas Tampa, Miami, Sarasota and Daytona Beach. Home sales are expected to increase, too, by about 3.6% in metro Atlanta and 7% nationally. This year, the Foundation will intensify its focus on housing affordability policy solutions for Georgia.

Where to? Idaho, South Carolina, Oregon, South Dakota and Arizona were the states with the highest proportion of inbound moves in 2020, according to the 2020 United Vans National Movers Study. New Jersey, New York, Illinois, Connecticut and California saw the highest proportion of outbound migration. Georgia was in the middle of the pack, at No. 26 in the nation. All Georgia’s neighbors were ranked in the top 10 inbound states. The Tax Foundation ranks Georgia No. 31 in the nation in its 2021 Business Tax Climate Index. 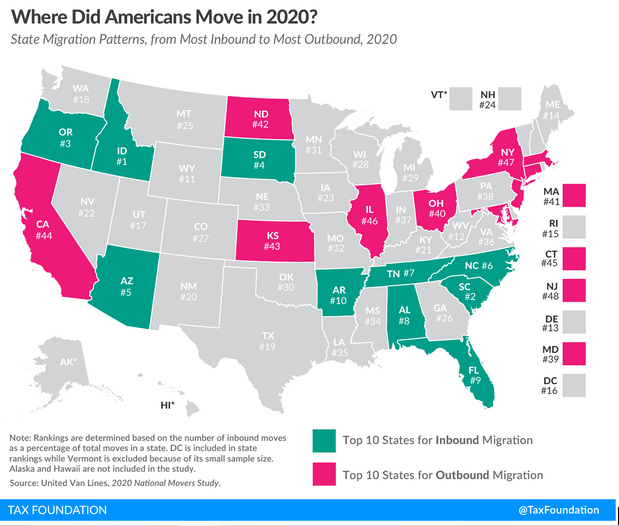 Scholarships: Among legislation introduced for this year’s session is a bill that would offer education scholarship accounts for qualified education expenses, including to families seeking an alternative for students in public school districts that are not offering full-time in-person schooling. This week, Gwinnett County – Georgia’s largest school district – announced schools would not offer in-person instruction next week.

Lights, camera: Arguing for cameras to remain in the classroom post-pandemic, Michael J. Petrilli points out, “teaching is a fundamentally public act, especially in public schools. It’s a bit like the role that judges play in criminal trials. Some states allow such trials to be broadcast live, so that judges’ performances are transparent, for the whole world to see. But of course when the judges go into their chambers, the cameras don’t follow. So too with teachers. When they are providing live instruction in the classroom, there should be no expectation of privacy. Other parts of the job, like lesson planning and grading, should remain sacrosanct.” Source: Education Next

Foundation in the news: The Atlanta Journal-Constitution quoted Kyle Wingfield in an article about a lawsuit challenging an ACA healthcare waiver granted to Georgia to expand healthcare options. (Wingfield said the waiver was worth trying. “This comes down to whether you want to let states try to improve on a poorly functioning law or not,” Wingfield told the newspaper. “Considering that hundreds of thousands of Georgians who qualify for subsidies don’t buy insurance on the federal exchange, the current system obviously isn’t working.”)

This month in the archives: In January 15 years ago, the Foundation published “Property Rights, Politics and Policy.” It noted, “Rejecting social engineering by government – eliminating blight and redevelopment as justification – is the only sure way to avoid abuse of eminent domain authority.” Happily, Georgia legislators then enacted some of the strongest protections in the nation.

Visit georgiapolicy.org to read the Foundation’s latest commentary, “‘State of the State’ as Varied as Georgia’s Landscape,” by Benita M. Dodd.