In 2018, Georgia’s standard deduction amounts were doubled effective for the 2018 tax year, and effective January 1, 2019, Georgia’s top marginal personal income tax rate was reduced from 6% to 5.75%. The same legislation allowed for reducing the rate to 5.5% on or after January 1, 2020,      subject to ratification by the General Assembly and Governor. (The Georgia State Constitution caps the top marginal tax rate at 6%.) The second tax cut failed as the pandemic hit the state in March 2020.

Sales Tax Base: Historically, sales taxes are applied to goods unless exempted, while services are exempted unless specifically included by the tax code. Economists agree that there is no economic reason to treat goods and services differently. In fact, all products are a combination of a good and a service. Government purchases should also not be exempt because government often competes with private companies that must collect sales tax.

The chart below shows the steady decline of the Georgia sales tax base over time as a percentage of personal income. Taxing most goods and services at the retail level would more than double Georgia’s sales tax base. 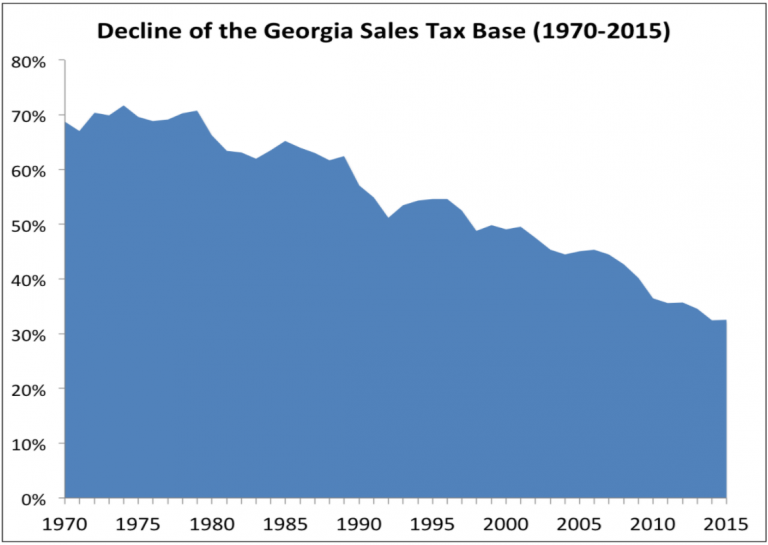 Personal Income Tax Base: Exemptions include the standard deduction, itemized deductions, personal exemptions and retirement income of up to $130,000 per couple.

Broadening the Sales Tax Base Enhances Growth and Lowers Volatility

More than half of all business income nationally is taxed through the individual income tax, not the corporate income tax. That’s because more than nine out of 10 businesses are organized as “pass-throughs” – Partnerships, Sole Proprietorships or S Corporations.

The pervious table is based on Georgia State University study and demonstrates how broadening the sales tax base to include groceries and services enhances growth and reduces volatility.

Just as important are the entrepreneurs behind those start-up companies. Gallup CEO Jim Clifton notes that the technology build-out that led to the $10 trillion of unplanned revenue growth over the past 25 years in the United States can be traced to about 1,000 innovators and entrepreneurs.

Georgia has made strides in developing its start-up ecosystem over the past five years but still loses too many young startups due to a lack of capital. How do you fix that? As a former Citicorp CEO famously noted, “Capital goes where it’s welcome and stays where it’s well treated.”

When entrepreneurs choose to move to Florida, for example, to escape Georgia’s 5.75% income tax, Georgia doesn’t just lose the tax revenue on the sale of the entrepreneur’s business and the tax on his or her earnings. Also lost is their community leadership, their philanthropic giving and the mentoring and investment in the next generation of entrepreneurs.

For business owners, a state like Texas (no income tax) is just an airport away. Florida (no income tax), Tennessee (1% on dividends and interest income only; set for repeal in 2021) and North Carolina (5.25% income tax) are a short drive away. It’s easy for the wealthy and retirees to relocate their homes and wealth beyond Georgia’s tax reach. Further, Georgia’s rate reduces its regional competitiveness, prompting the state to offer more tax incentives to lure new business.

In reality, the income tax is not a tax on the wealthy; it’s a tax on becoming wealthy. The wealthy are able to hire professional advisers to help them find loopholes and tax shelters. They can purchase non-taxable investments, time their income streams or just spend six months of the year in Florida. It’s the working class that gets stuck paying the bulk of income taxes, which limits their ability to accumulate wealth.

How to accomplish this goal is more of a political decision than a policy issue.

The Special Council on Tax Reform and Fairness for Georgians recommended eliminating most of the current exemptions in the individual income tax code. Another proposal would limit itemized deductions to charitable contributions and up to $20,000 of mortgage interest. This would allow the top personal income tax rate to be reduced to 5.25%.

The FairTax is a retail sales tax applied to nearly all goods and services. In studies prepared for the Georgia Senate Fair Tax Study Committee, the Fiscal Research Center at Georgia State University estimated that eliminating the personal and corporate income tax and incorporating a state FairTax with a rate of 6.42% would result in no loss of income to the state and would lower the tax burden for most low-income families. A more recent study by the Beacon Hill Institute found a FairTax rate of 5.4% would be sufficient. Georgia’s state sales tax rate is 4%; local sales taxes add an additional 2-5.9%. With the additional local revenue from a FairTax, local sales tax rates and/or property taxes could be reduced.

The Georgia Public Policy Foundation is grateful to Senior Fellow Kelly McCutchen for his contributions to this chapter.