Any reforms to pensions should consider the long-term solvency of a plan and protect the promised benefits for employees already in the system. The benefits in a public employee retirement system should be sustainable, secure and affordable:

The best pension reforms emerge from collaborative efforts involving a broad cross-section of stakeholders in a process that examines a system’s flaws, explores and analyzes all possible methods of reform, and achieves consensus on a package that meets these principles.

Georgia was ahead of the reform curve in 2008 when it created a hybrid pension plan for all new state employees with an option for existing employees to participate.

Relative to other states, Georgia is in a better than average position, yet still has a great need for improvement.

There has been an alarming rate of growth in recent years in the required, taxpayer-funded employer contributions to Georgia’s two major retirement systems, the Employees’ Retirement System (ERS) and the Teachers Retirement System (TRS). This growth is expected to continue.

Contrary to widespread belief, defined benefit pension plans are designed to be pre-funded and should not require a steady influx of new participants to remain solvent. In other words, they should not require contributions from current workers to fund current retiree pension benefits. While an employee is working and accruing benefits, the plan should receive enough contributions from both employers and employees to cover all future retirement benefits promised. This differs from Social Security, where current workers are taxed to pay the benefits of current retirees (e.g., a “pay-as-you-go” system). When a defined benefit plan participant retires, the plan should have the total amount needed to provide the lifetime benefits promised to a public worker.

Hence, the amount of employer and employee contributions required each year to pre-fund promised future benefits is a critical element of pension financing and is based on two primary components:

Both ERS and TRS have relied on actuarial valuations to determine annual contributions. These valuations are based upon a set of assumptions – assumptions that can differ from actual plan experience. For example, for much of the past two decades ERS and TRS have assumed their assets would return an average of 7.5% over time. Since 2001, however, returns for the two plans have been closer to 6%. This is not just because of the 2008 financial crisis. Several years saw more than 10% returns, but there were also many years with less than 5% returns, and more than one year with negative returns.

Before these plans fully recovered from a recession over a decade ago, they encountered yet another significant challenge: Returns in 2020 are anticipated to be well below the systems’ assumptions, as a result of the economic disruption caused by the COVID-19 pandemic.

The result of having overly aggressive or unrealistic actuarial assumptions is that current taxpayers and public workers end up paying less than they should to save enough for the actual cost of the retirement benefits being accrued by existing state employees and teachers. This creates unfunded liabilities that are amortized over extended periods of time, meaning future taxpayers bear the burden of paying off this debt. 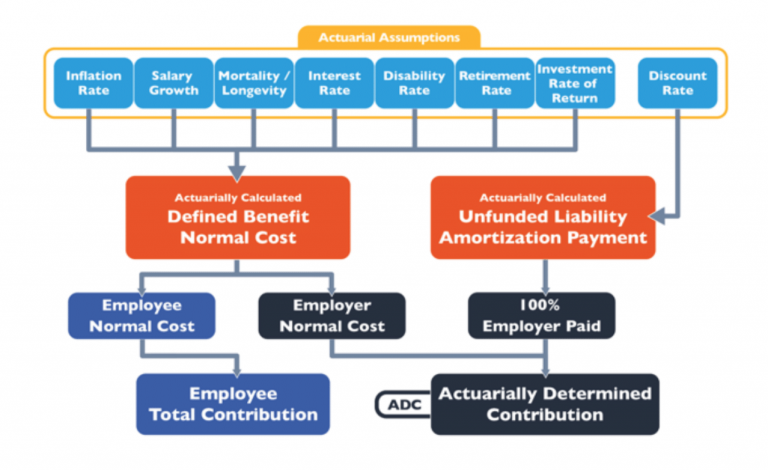 Nationwide, and in Georgia, we have observed a massive transfer of debt to the next generation – many whom have not yet been born. But this is not just a problem for the future; today’s taxpayers are already having to bear the costs of previous generations. For example, unfunded liability amortization payments – payments on pension debt – currently account for more than half of what taxpayers are paying into the TRS plan.
Accounting rules effective since July 1, 2014, for ERS and TRS significantly changed the method of accounting for deferred compensation for government employees. While the Other Post-Employment Benefits (OPEB) rules continue to evolve, the new pension rules are set and have correctly revealed previously unrecognized obligations, significantly reducing the funded status of all governmental plans, including ERS and TRS. If the OPEB rules ultimately adopted are in line with the pension rules, then the combined pension/OPEB unfunded liability for ERS and TRS will be substantial.

In 2008, the State of Georgia Merit System, a public human resources consulting office, contracted with Mercer Human Resource Consulting to evaluate state employees’ satisfaction with Georgia’s total compensation package. The study found that public workers were dissatisfied with salary levels. They thought pay was below market rates and poorly reflective of performance.

Employees under age 30 earning less than $35,000 annually (the majority of Georgia’s public workforce in 2008) were particularly dissatisfied. They valued current salary higher than deferred benefits, and were concerned about the lack of portability of their defined benefit plan.

In response to the study, then-Governor Sonny Perdue allocated $400 million of the 2008 budget to public employee wage increases.

Subsequently, the Georgia General Assembly passed a bill that established a hybrid pension plan for ERS and closed the traditional defined benefit plan for new hires. All employees hired after January 1, 2009, participate in the hybrid plan, while current participants in ERS plan may choose to join the hybrid plan at any time.

The range of options possible for remaking TRS include defined contribution plans, modifications to the current defined benefit pension plan, hybrid retirement plans that combine features of the first two, cash balance plans and even combinations of these different types. The important principle to adopt first is that TRS should be modified to be more in line with plans of other employers and to be fairer to teachers and taxpayers.

Challenges with the Teachers Retirement System

TRS represents a significant cost to taxpayers, but it is an important part of teachers’ compensation and benefits package. The current system is typical of government-teacher pension plans set up many years ago and serves many teachers well (especially those who put in more than 30 or 40 years). With so many situations where it works poorly in today’s world, however, policymakers should consider expanding alternative plans for new workers who are less likely to remain for their entire career.

The majority of Georgia’s teachers are hired at a young age, often right out of college. According to Bellwether Education Partners:

Today’s systems shortchange the vast number of teachers who may change jobs and teach in a different state or a school district covered by a different pension plan, as well as those who leave teaching to work in another sector. When it comes to retirement planning and security teachers are being systematically disadvantaged in the early years of their careers, a critical time to start building retirement savings. To put it in simple terms, teachers can lose more than half of their pension wealth just for moving one time; if teachers move multiple times – if, for example, their spouse was in the military – the losses would be even greater.

For this group of employees there are several issues that make TRS uncompetitive:

In 2015, Georgia State Senator Hunter Hill proposed legislation to place new teachers in a hybrid defined benefit/defined contribution retirement plan. It garnered significant legislative support but was not adopted. Several smaller pension reform bills met a similar fate in the 2020 session. This is because Georgia law places a high hurdle in front of potential structural changes to pension systems. A legislator must submit a full reform proposal, which then needs separate legislative approval of an actuarial analysis of that proposal. Hill’s legislation failed to receive that approval. A reform proposal that makes it through the actuarial analysis phase must then be adopted as is; amendments trigger a need for a separate actuarial analysis.

Pension Reform in Other States

Since 2009, almost every state has implemented some reform of defined benefit pension systems, largely in response to the economic downturn and a growing awareness of the financial risks that governments and taxpayers are exposed to regarding retiree benefit guarantees. Most modifications were not fundamental shifts away from defined-benefit pension systems, however. Common changes include changes to pension benefit formulas; revisions to cost-of-living-adjustment; increases in retirement ages and years-of-service requirements; increases in employee contribution rates, and the addition of optional defined contribution plans.

One of the more robust recent hybrid-style reforms comes from Arizona. In February 2016, Arizona policymakers overwhelmingly approved comprehensive, bipartisan pension reform legislation designed to put the state’s beleaguered public safety pension system on a path to financial solvency, reduce taxpayer exposure to financial risk by more than half, reduce long-term costs for employers and employees, and offer public safety personnel a choice between a hybrid plan or a portable defined contribution plan.

Even more notable than the reform itself is the process used to achieve stakeholder consensus, avoiding the adversarial dynamic of pension reform policy debates that typically pit employers/taxpayers against employees and labor interests. The legislation was the product of a yearlong dialogue and negotiation involving policymakers, unions, municipalities and the pension experts at the libertarian Reason Foundation. Ultimately, it garnered extensive support from public safety unions and many other stakeholders in the government and business community.

Four states have reforms that go further, placing some categories of new hires into mandatory defined contribution plans. Michigan was the first to enact this reform in 1996, followed by Alaska (2005), Arizona (2013; elected officials and judges only) and Oklahoma (2014). Michigan’s state employee plan transitioned to a defined contribution (DC) plan in 1997. Since then, new state employees have received a 4% employer contribution plus a dollar-for-dollar match up to 3% of pay deferred by the employee. In Alaska, state and school employees hired after June 30, 2006, participate in a DC plan. The employer makes an 8% (of compensation) contribution. State employees contribute 5% and school employees contribute 7%.