“A legislative act contrary to the Constitution is not law.” – John Marshall

“America is a great country. It has many shortcomings, many social inequalities, and it’s tragic that the problem of the blacks wasn’t solved 50 or even a hundred years ago, but it’s still a great country, a country full of opportunities, of freedom! Does it seem nothing to you to be able to say what you like, even against the government, the Establishment?” – Golda Meir

September 24: Foundation supporters can register here to attend the 2020 Health Connect South Conference at no charge. The conference takes place online on Thursday, September 24, from 8 a.m. to 5 p.m. Now in its seventh year, Health Connect South is one of the largest gatherings of health innovators, decision makers and next-generation health leaders in the Southeast. Find out more here. Questions? Contact Mark Jarboe at Mark.Jarboe@healthconnectsouth.com or 404-668-3314.

Ups and downs: Weekly initial claims for jobless benefits fell by 33,000 to a seasonally adjusted 860,000 in the week ended Sept. 12, the U.S. Labor Department announced Thursday. The number was better than Dow Jones estimates of 875,000. The Labor Department reports about 15 million claims for benefits from the Pandemic Unemployment Assistance program, part of the $2.2 trillion federal relief package in March. The New York Times reports the numbers may overstate recipients by 5 million or more, probably because of fraud and abuse of the program.

Opportunity: More than 155,000 job openings are listed online at  EmployGeorgia.com for Georgians to access, a 50% increase over what was listed before the pandemic, according to the Georgia Department of Labor.

Food boxes: From May 15 through August 27, the U.S. Department of Agriculture delivered 74 million food boxes to nonprofits, food banks and other entities in the first two rounds of the $3 billion Farmers to Families Food Box Program. The USDA has $450 million left for the third round of the program, which was developed in response to COVID-19 disruptions that hindered the marketing of farm products. The Government Accountability Office argues, “USDA has not evaluated programmatic aspects for the first two rounds of the program.”

IRS efficiency: Taxpayers inquiring about tax-exempt organizations need to call a toll-free IRS number or write letters. The 30 employees of the Exempt Organizations correspondence unit at the Tax-Exempt and Government Entities division process about 30,000 pieces of mail every year. Starting with the correspondence unit, the IRS is embarking on an update and digitalization of its decades-old systems – some dating from the Kennedy administration. Source: Accounting Today

Uninsured snapshot: About 29.6 million Americans had no health insurance at some time in 2019, according to the American Community Survey by the Census Bureau. That’s an uninsured rate of 9.2%, down from 15.5% in 2010, before much of the Affordable Care Act took effect. In Georgia, the 2019 uninsured rate was 13.4%, down from 19.7% in 2010. About a million fewer were insured in 2019 than in 2018; President Trump eliminated the tax penalty for lack of coverage beginning in 2019.  Source: Becker’s Hospital Review

2019 coverage: The Census Bureau’s report on uninsured Americans cited findings from another survey, the Current Population Survey Annual Social and Economic Supplement, which found the uninsured rate was closer to 8%, or 26.1 million people who reported they had no coverage at any time in 2019.

Drug prices: Generic prescription drugs make up 90% of the prescriptions sold in the United States, but the use of cheaper, generic biologic drugs is lagging. That means patients and their health plans are spending more than they should, Merrill Matthews of the Institute for Policy Innovation points out. Biologics are costly, complex drugs containing living cells and target diseases such as cancer and arthritis. By now, 28 generic versions, known as “biosimilars,” have been approved for nine brand-name biologics. But, “the [Pharmacy Benefit Manager] middlemen often make more money by steering patients to the brand name product, which affects how much individuals, and especially employers who provide health coverage, pay for the drugs,” Mathews posits. Read the Foundation’s recent commentary, “Legislature Acts to Increase Transparency in Drug Pricing.” 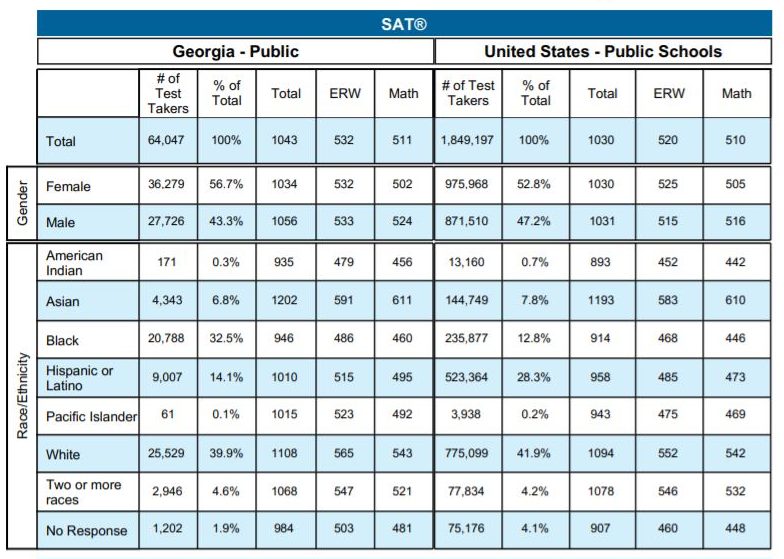 Achievement: Georgia’s public school students beat the national SAT average for the third year in a row, earning an average of 1043 out of 1600, the Georgia Department of Education reported. More than 64,000 students took the test. The average score was 13 points better than the U.S. average of 1030. Georgia’s black students scored 30 points higher and Hispanic students scored 52 points higher than the national mean for their cohorts.

Choices: This fall, more than 60% of U.S. K-12 public school students started the school year remotely, and many working families are still searching for a space where their child can be supervised in their remote learning. National School Choice Week is compiling a growing list of spaces for school-age children to receive virtual learning support. View Georgia’s list here.

Education funding: A federal judge in Washington, D.C., struck down a rule championed by U.S. Secretary of Education Betsy DeVos that required public school districts to direct more of their pandemic relief funds to private school students. Critics argued the rule siphons needed resources away from public schools at a time when state and local funding concerns are threatening their ability to maintain staff and operations. This ruling reinforces the need for policymakers to ensure money follows the student; private-school parents are taxpayers, too, and receive no direct benefit from the education taxes they pay.

Election miscellanea: In-person early voting begins October 12 in Georgia. After being denounced for prohibiting on-campus early voting, the University of Georgia reversed course Thursday and announced early voting will take place at UGA’s basketball arena. Fulton County, where many of Georgia’s primary voting problems were reported, plans to have 251 polling places open for Nov. 3, up more than 80 from the June primary. About 60% of the county’s 787,000 active voters will be affected by recent polling place changes. Check the state’s My Voter Page for where to vote. Source: News reports

Foundation news: Keara Vickers has joined the Foundation as Communications Director. Reach her at kearav@georgiapolicy.org or 404-256-4050 extension 6.

This month in the archives: In September 10 years ago, the Foundation published, “Georgia Must Move from Moderation to Innovation.” It noted, “The word that should replace ‘Moderation’ on the state seal is ‘Innovation.’ The textile and manufacturing jobs that left the state in the past 10 years are not coming back. It’s time to invest in technology, healthcare and the next-generation of skilled manufacturing that will spark the recovery.”