Don’t miss a session of the 2020 Georgia Legislative Policy Forum. The Foundation is recording each Zoom session for our YouTube channel! 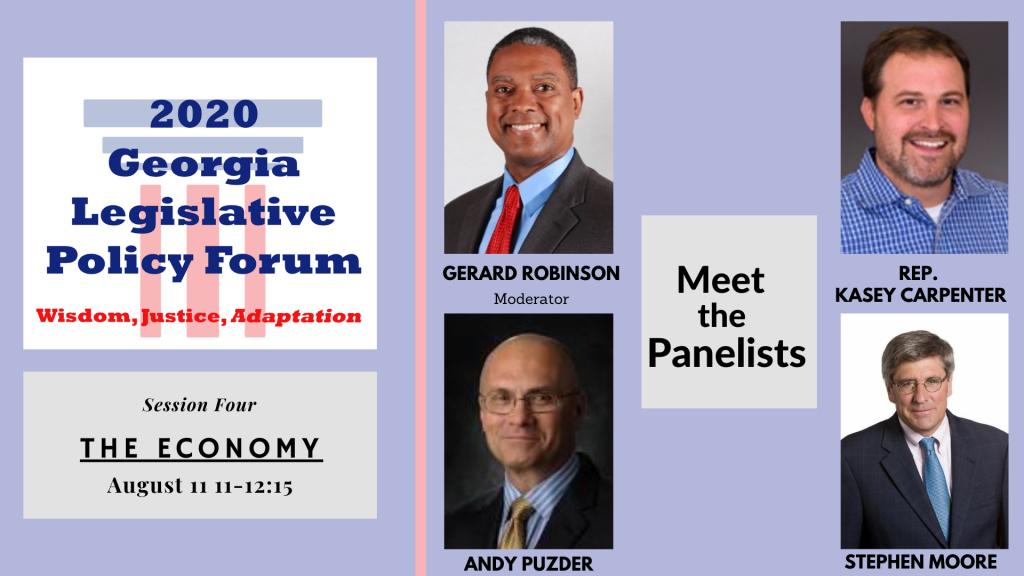 Register here for the next session, “The Economy: Effects and Expectations,” on Tuesday, August 11, at 11 a.m. Moderated by Gerard Robinson, the panel features Rep. Kasey Carpenter (R-Dalton), a small business owner; Stephen Moore, a member of President Trump’s Economic Recovery Task Force and co-founder of the Committee to Unleash Prosperity; and Andy Puzder, former CEO of CKE Restaurants and co-author of, “Job Creation: How It Really Works and Why Government Doesn’t Understand It.”

There is no charge to register for this eight-week series, but participants must have authenticated Zoom accounts. Read more here. The Forum’s theme is “Wisdom, Justice, Adaptation,” a play on the state motto: “Wisdom, Justice, Moderation.” The topics: Education; The Budget; Land Use and Transportation; The Economy; Housing; and Healthcare. View the program here for the agenda and speaker bios.

“History suggests that federal bailouts are not a ‘free lunch’ for states. They decrease state sovereignty, incentivize future fiscal irresponsibility and create a moral hazard problem. Bailouts reward fiscally reckless states at the expense of fiscally responsible ones. Academic research from the Mercatus Center at George Mason University shows that federal bailouts could even lead to higher state level taxes. According to their research, every dollar of federal aid to states drives state taxes higher by 33 to 42 cents.” – Jonathan Williams and Lee Schalk

“’Emergencies’ have always been the pretext on which the safeguards of individual liberty have been eroded.” – Friedrich von Hayek

“The best way to procure insults is to submit to them.” – William Hazlitt

Special session: Gov. Brian Kemp announced Wednesday that “in the coming weeks” he will call a special session of the Legislature to fix a technical error in legislation he signed that exempts Hurricane Michael relief payments from certain taxes. He added: “Such special session may also be timely to address other budgetary and oversight issues.”

COVID-19 status updates: The Georgia Department of Public Health, which updates the number of pandemic cases and deaths daily at 3 p.m., has now updated its website map to provide more clarity on trends. The map provides reports on county-level cases and deaths. Visit the website here.

Licensing: The pandemic revealed how state government licensing of health professionals blocks access to care, Shirley Svorny and Michael F. Cannon write in a Cato Institute policy analysis. State politicians’ actions do this “by increasing prices and reducing the supply of clinicians who can provide those services.” Suspending such rules during the pandemic was an acknowledgment of the harm they do, but a better solution would be “a system in which states recognize third‐​party organizations that certify the competence of health professionals.”

Oversight: Gov. Brian Kemp vetoed legislation to create an oversight committee for the State Health Benefit Plan, which covers state employees. He said such a law would “violate the separation of powers” between the legislative and executive branch, which appoints the Board of Public Health. We hope this means the governor has an executive oversight strategy.

Antiquated antitrust: Legislators in New York on Wednesday proposed an expansion of that state’s antitrust powers, with an eye toward targeting tech giants such as Amazon, Apple, Facebook and Google, whose CEOs were grilled last week by a U.S. House committee. But as The Wall Street Journal points out, antitrust regulators are usually behind the times: “Trust-busters target a market at a particular moment in time, though the digital marketplace is ever-changing. They targeted IBM’s mainframe dominance even as desktop PCs were on the verge of putting more computer power in the hands of individuals. They targeted Microsoft’s browser advantage on the desktop even as Google was creating new competition in search and Apple in devices.”

Growing list: The regulations suspended by federal, state and local governments for the duration of the pandemic now number at least 846, according to a list maintained by Americans for Tax Reform.

Land use and housing

Migration trends: A record 27.4% of Redfin.com users looked to move to another metro area in the second quarter of 2020, the housing website reports. Atlanta – with June’s median home sale price at $269,900 – was No. 5 on the list of top 10 metro areas for “net inflow.” More than 26% of Atlanta’s Redfin.com searchers were from out of state, and most of those from New York state. Register here for the August 18 Zoom panel discussion on housing at the 2020 Georgia Legislative Policy Forum.

Census data: The Census Bureau plans to deliver the 2020 count to the president by December 31 and will end follow-up work on September 30. The response to date is 63.1% of U.S. households. In Georgia, the response rate is 58.9%, ranging from 25.3% in Hancock County to 74.9% in Fayette County. The census is important, not just for an accurate count but for federal funding, legislative redistricting, congressional reapportionment and redistricting, and even the electoral college. Source: ALEC.org

Where will they go? More than 100 private schools plan to close down, at least in part because of the pandemic, according to a report in Education Next. “It is not the well-endowed private schools serving the one percent that face risk,” writes Martin West. The Cato Institute reports annual tuition charged at these schools averages under $7,000, less than half the average per-pupil spending on public schools nationwide. As West points out, “the nation’s 5.7 million students who now attend private schools save money for taxpayers, who otherwise would have to pay to educate these children in public schools.”

Fostering academic achievement: Up to 30% of children in foster care need special education help in school, according to GenJustice.org. A new Georgia law requires public schools to screen newly enrolled foster children for special needs and learning challenges “to determine whether exposure to trauma has had or is likely to have an adverse impact on the foster care student’s educational performance and classroom behavior.”

This month in the archives: In August 20 years ago, the Foundation published, “If Government Doesn’t Relieve Distress, Who Will?” It noted, “Charity is a personal virtue. When government does not undertake ‘relief,’ millions of adults stand as guardians against distress.”