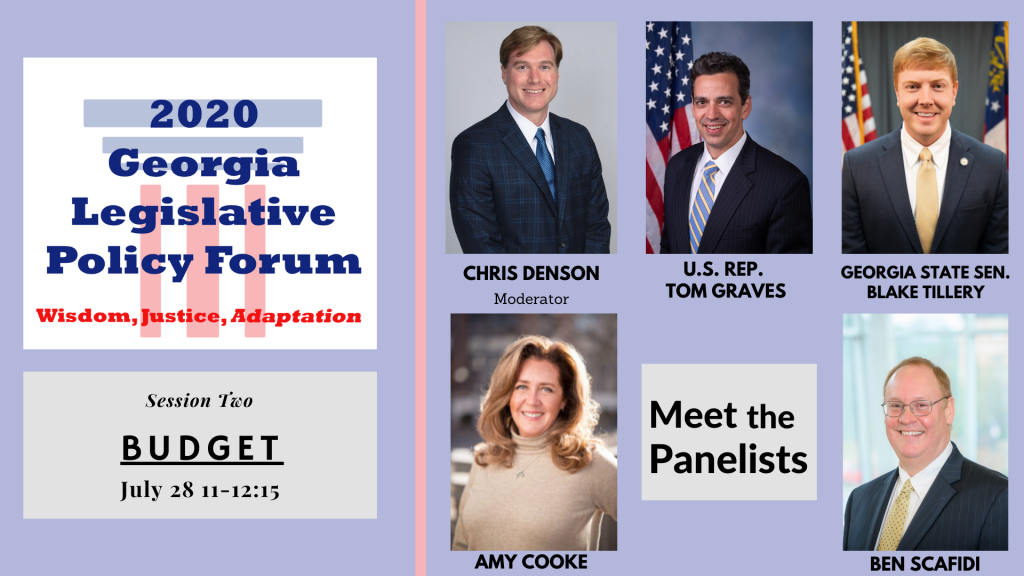 Register now for “Budget Calisthenics,” on Tuesday, July 28. Moderated by Chris Denson, the Foundation’s Director of Policy and Research, the panel features Georgia Congressman Tom Graves, a member of the House Appropriations Committee and ranking member on its Financial Services and General Government subcommittee; Sen. Blake Tillery, Chairman of the Senate Appropriations Committee; Amy Cooke, CEO of the John Locke Foundation; and Ben Scafidi, Professor of Economics at Kennesaw State University and a Senior Fellow at the Georgia Public Policy Foundation.

There is no charge to register for this eight-week series, but participants must have authenticated Zoom accounts. Read more here. The theme is “Wisdom, Justice, Adaptation,” a play on the state motto: “Wisdom, Justice, Moderation.” The topics: Education; The Budget; Land Use and Transportation; The Economy; Housing; and Healthcare. View the program here for the agenda and speaker bios.

“Every year on your W-2, and even more frequently on your paycheck, you see how many dollars of income you lose to taxes. Yet there is no such accounting for the unseen power of regulation to lower the average American’s income, raise prices and protect the position of the wealthy.” – Colin O’Reilly

“He that would make his own liberty secure, must guard even his enemy from oppression; for if he violates this duty, he establishes a precedent that will reach to himself.” – Thomas Paine

Cities vs. State: The Georgia Municipal Association (GMA) filed an amicus brief supporting Atlanta Mayor Keisha Bottoms in a lawsuit filed against her by Gov. Brian Kemp after she ordered a mask mandate and return to “phase one” restrictions, requiring many businesses to close again. Kemp’s executive order prohibits local governments from imposing more or less than his order requires; GMA alleges the governor would “usurp local control and Home Rule authority” by seeking to block cities from taking additional steps. The case is expected to go to court Tuesday. Source: Atlanta Journal-Constitution

Foster care: A package of foster-care legislation would improve the lives of children, families and caregivers in Georgia. Foster parents can now leave a child with a babysitter for up to three days without having to get state approval. With the championship of GenJustice.org, legislators voted unanimously to allow foster caregivers as well as relatives  to participate in court proceedings about the child’s placement.

Getting back to work: The Georgia Department of Labor has paid out almost $10.5 billion in unemployment benefits since March 21. It paid out over $1 billion last week alone, more than the $922 million issued in the past three years combined. The amount included $886 million in federal pandemic payments. Georgia claims were down 16,139 from the week before, to 122,313, but the high numbers of initial jobless claims are prompting more fraud investigations, the department reported. 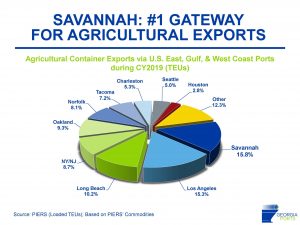 Opportunity: With nearly 18 million Americans out of work amid the pandemic, more than 200 public, private and nonprofit members of Business Roundtable and the White House’s American Workforce Policy Advisory Board (AWPAB) joined forces in an ad campaign to help people develop their skills for the rapidly changing job market. The campaign encourages Americans to “find something new” at FindSomethingNew.org, whiich offers resources on a wide range of education and training options, including online and virtual learning. Source: MHLNews.com

‘New normals’: Georgia State Rep. Jan Jones, House Speaker Pro Tem, was a panelist on Tuesday’s education panel discussion at the 2020 Georgia Legislative Policy Forum. The panel focused on how to adapt education during and after COVID-19. “What we cannot lose sight of is the fact that many children – in a month – will not be in what many parents consider the best setting for them: a traditional school classroom,” Jones pointed out. “One size does not fit all; numerous children need a structured environment.”

To each his own: Most Georgia students left school buildings in early March. As districts consider how to open for the new school year – virtual, in-person or hybrid schooling – State School Superintendent Richard Woods said he would support systems in their decisions and the Georgia Department of Education (GADOE) issued guidelines. A spokesperson for GADOE said there is currently no plan to compile and publish a list of the state districts’ plans. Metro-area parents seeking to compare districts, however, can visit WSB-TV’s list covering metro-area schools.

COVID-19 status updates: As of Thursday, Georgia’s reported COVID-19 count was at more than 156,588 confirmed cases and 3,360 deaths, with 16,353 hospitalizations. The Georgia Department of Public Health’s numbers are updated daily at 3 p.m. The Georgia map provides reports on county-level cases and deaths. Visit the website here.

If at first you don’t succeed: Less than two years after Gwinnett County voters rejected joining MARTA, county commissioners voted this week to ask voters again about a 30-year, 1% sales tax to raise $12.2 billion for transit expansion. The referendum to be voted on Nov. 3 will once again include heavy rail, the Gwinnett Daily Post reported. Read Dave Emanuel’s July 17 commentary on heavy rail in Gwinnett.

Detours and diversions: Reason Foundation’s Baruch Feigenbaum reports that half the nation’s states divert gas tax revenues away from roads and highways, with New York, Rhode Island, New Jersey, Michigan and Maryland each diverting over 30%. Georgia was not one of the culprits. Register for the 2020 Georgia Legislative Policy Forum’s August 4 session on Land Use and Transportation to hear Feigenbaum’s take on transportation in Georgia.

Shenanigans: As more people switched to working from home during the pandemic, ransomware attacks surged, according to a new report that found a 72% increase in new file-encrypting malware in the first half of the year. Mobile and browser-based vulnerabilities have grown in volume, complicating security team responses as they deal with overlapping personal and corporate networks, according to Skybox Security’s 2020 Vulnerability and Threat Trends Report.

Growing list: The regulations suspended by federal, state and local governments for the duration of the pandemic now number at least 845, according to a list maintained by Americans for Tax Reform.

This month in the archives: In July 20 years ago, the Foundation published, “An Oxymoron for 21st Century Atlanta: More Roads Equal Improved Air Quality.” It noted, “Increased funding of transit may appear environmentally friendly, but practicality dictates action supporting the purchase of low-polluting vehicles, a commitment to reducing the number of high-polluting vehicles and a focus on removing traffic bottlenecks.”