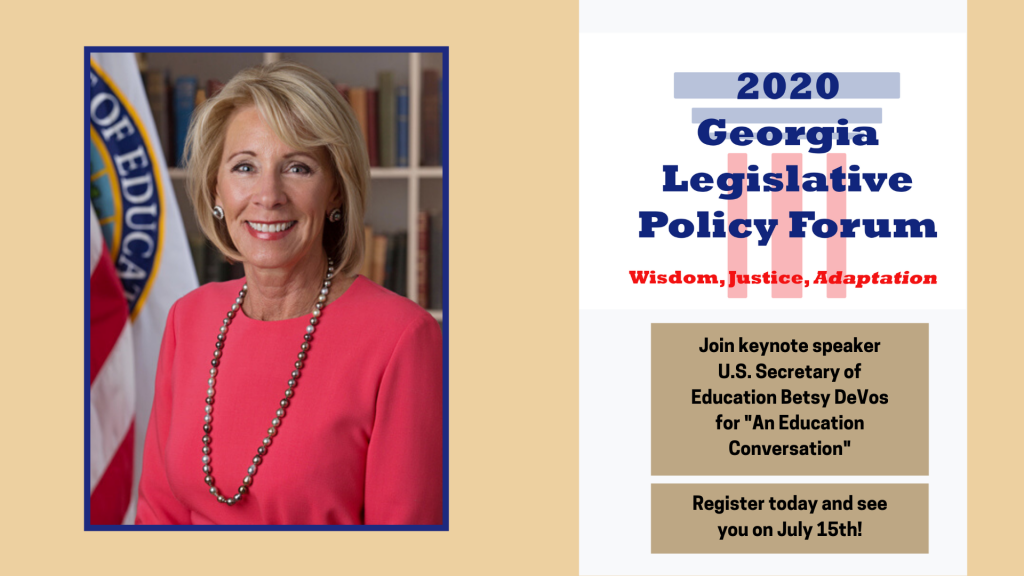 Have you registered? The 2020 Georgia Legislative Policy Forum begins Wednesday, July 15, on Zoom with the opening keynote, “An Education Conversation,” with Betsy DeVos, U.S. Secretary of Education. Because of COVID-19, the event that has been held since 2010 as an in-person, daylong forum has been changed to an eight-week online series. There is no charge, but participants must have authenticated Zoom accounts. Read more here; register here. The theme is “Wisdom, Justice, Adaptation,” a play on the state motto: “Wisdom, Justice, Moderation.” Forum topics: Education; The Budget; Land Use and Transportation; The Economy; Housing; and Healthcare. Sign up today!

“A pure democracy is generally a very bad government, It is often the most tyrannical government on earth; for a multitude is often rash, and will not hear reason.” – Noah Webster

“I am for doing good to the poor, but I differ in opinion of the means. I think the best way of doing good to the poor, is not making them easy in poverty, but leading or driving them out of it. In my youth I travelled much, and I observed in different countries, that the more public provisions were made for the poor, the less they provided for themselves, and of course became poorer. And, on the contrary, the less was done for them, the more they did for themselves, and became richer.” – Benjamin Franklin

“Laws are spider webs through which the big flies pass and the little ones get caught.” – Honore de Balzac

Adding options: Walgreens announced this week it will establish full-service doctor offices at stores across the nation after a successful trial begun last year. The company will invest $1 billion over five years to open up to 700 “Village Medical at Walgreens” physician-led primary care clinics in more than 30 U.S. markets. They will be staffed by more than 3,600 primary care providers recruited by Walgreens’ partner, VillageMD. They will offer 24/7 care, including telehealth and at-home visits, and Walgreens plans to locate more than half in underserved areas. Source: Businesswire

COVID-19 status updates: Nationally, confirmed COVID-19 cases exceed 3 million and deaths are at 130,000. Georgia’s count is at more than 106,000 confirmed cases and nearly 3,000 dead. The Georgia Department of Public Health’s COVID-19 status reports are updated once a day at 3 p.m. The Georgia map provides reports on county-level cases and deaths. Visit the website here.

Medicaid expansion: Voter approval for Medicaid expansion squeaked by in Oklahoma, making it the 37th state to expand Medicaid since the passage of the Affordable Care Act and the first to expand Medicaid during the pandemic. The 50.5% voter approval, in a state already facing budget shortfalls, will cost Oklahoma up to $374 million extra each year, noted Jonathan Small, President of the Oklahoma Council of Public Affairs.

Sine die: The Legislature, which adjourned June 26, did more than pass its only constitutional mandate, a balanced budget. Among other legislation that passed:

Criminal justice: Gov. Brian Kemp already has signed hate crimes legislation into law. Legislators also established hate crimes protections for police, firefighters and emergency responders. Two bills would facilitate expungement of criminal records. One would allow an individual convicted of a nonviolent misdemeanor to restrict public access to records if no further crime is committed within four years. Another would let victims of human trafficking petition the court to vacate convictions for crimes they committed while being trafficked.

Education: In a cost-cutting measure, the Legislature capped dual enrollment at 30 hours of college credit for most high school students in dual enrollment. Unfortunately, in a COVID-19 era where public education accountability should be paramount, legislators also agreed to reduce state standardized tests – eliminating four of eight high school tests and one middle school test.

Healthcare: Low-income new mothers would get six months of Medicaid insurance after giving birth, up from two months now, pending any federal potential Medicaid waiver requirementsl. Legislation would limit patient liability and increase transparency in order to reduce “surprise billing,” when patients are billed for the balance after using an unapproved out-of-network healthcare provider at an in-network facility. The Governor has already signed into law increased employee training requirements and patient protections at assisted living and nursing homes.

COVID-19: The Governor signed legislation allowing workers to earn up to $300 a week and keep full unemployment benefits, while some would be allowed to collect benefits for longer than the previous 20-week limit. Georgia Labor Commissioner Mark Butler said he intends to keep the $300 earnings limit in place at least through December, according to WABE.org. The Legislature also approved liability protections through July 14, 2021, for businesses and healthcare facilities, except in cases of negligence or misconduct.

Taxes, fees and credits: After state auditors cited questionable claims and film tax credits, film projects will have to be audited before they can claim tax credits. Legislators approved a 7% excise tax on vaping products and barred anyone under age 21 from purchase or possession of vaping products, considered a harm-reduction product because they reduce tobacco use. Americans for Tax Reform urged the governor to veto the tax increase. Legislators also approved a 50 cents per ride fee on ride-hailing services such as Uber and Lyft, in an attempt to reduce the potentially higher costs of the sales tax collection required of marketplace facilitators.

Growing list: The regulations suspended by federal, state and local governments for the duration of the pandemic now number at least 785, according to a list maintained by Americans for Tax Reform.

This month in the archives: In July 15 years ago, the Foundation published, “Without Local Curbs, Eminent Domain Abuse Is Imminent.” It noted, “The Takings Clause was intended to secure the property rights of both rich and poor, and the reasonable needs of government. It’s frightening that a developer or redeveloper can ignore property owners and essentially stop by city government to have an area condemned under the fickle definition of ‘blight.’” Happily, the Legislature responded, enacting some of the toughest private property protections in the nation.

Visit georgiapolicy.org to read the Foundation’s latest commentary, “When Will Georgia Legislature Break Up with Tax Breaks?” by Frank Stephenson.